If you have ever driven or been a passenger in a Volkswagen then you already know what an engaging and entertaining spirit they release. From the top model in their lineup to the entry-level, Volkswagen delivers road cars built for enjoyment. The main reason I chose this ride is that VW stays true to their passenger car form in their SUV lineup delivering consistent light stable steering, a giddy turbocharged engine and sure-footed traction.

The similarities of road character, comfort and performance between VW’s Tiguan SUV and the highly awarded Golf hatchback, built on a similar sized platform, are awfully close. The only distinguishable factors behind the wheel of the Tiguan are that it is a touch smoother at cruising speeds, more interior space and higher off the ground allowing for better clearance. The Tiguan feels like a lifted hatchback or short wagon instead of a small truck like the other direct competitors that have a larger footprint including the Mazda CX-5, Ford Escape and Subaru’s Forester. 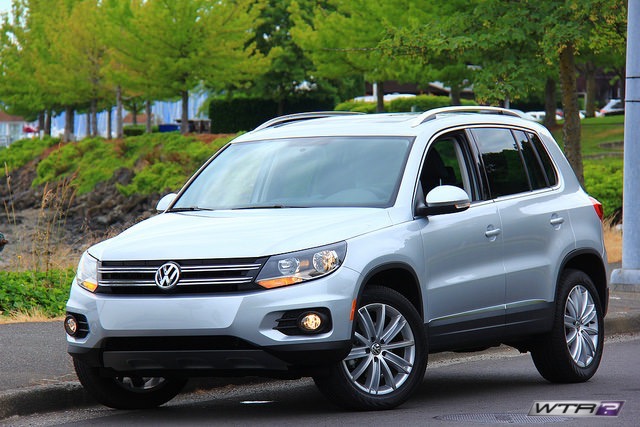 This four-door, five-passenger, 174.5 inch short Tiguan compact Crossover SUV is VW’s smaller variant in their SUV lineup. A lower MSRP this year $24,890 too. Delivering a mildly updated infotainment system and more standards for mid-models. For 2016 VW continues selling the Tiguan in four model lines including the basic S, sport-tuned R-Line, upscale SE and the full-featured SEL.

The entire Tiguan four model lineup is equipped with a turbocharged two-liter four-cylinder gasoline engine unloading a whirling 200 HP and a punctual 207 ft-lbs of torque as low as 1700 RPM. Modern combustion efficiency tech is aplenty with variable intake valve timing and direct injection to name a few. VW did away with the basic model S manual transmission in 2015, again this year it is off the assembly line. In the event of ordering your 2016 Tiguan notice that all models are assembled with a tradition Tiptronic automatic transmission providing 6-speeds, Sport mode and their Dynamic Shift Program. The Sport mode differences were most noticeable through its shift patterns and throttle feel. The R-Line is unique to the lineup with a flat-bottom steering wheel with wheel mounted paddle shifters along with its exterior bolt-on parts giving the R-Line a racey profile.

Power is fed to the front wheels though VW offers an electronically active 4Motion AWD system. This system can throw the majority of its power instantly to the rear wheels, back to the front wheels or equally to all four corners. I tested a FWD model that I thought was well suited for pulling up to highway speeds quickly in the dry or ripping through Pacific Northwest puddles and letting the electronic stability control figure it out. I never felt out of touch with grip.

The turbocharger is just loud enough to let you know when the party is about to begin so watch out not to burn too much fuel. I found myself in the high teens for fuel economy in a FWD model however VW says it will get 21 city, 26 highway. The 4Motion is bound to be a bit lower MPG although you’re gaining more than you’re losing.

VW’s turbo four-cylinder rests in a predominantly aluminum built chassis constructed beautifully. German automotive architectures most often are fabricated with strength and safety in mind which shines supremely over horrible train tracks and truck sized potholes. The chassis and suspension seemed composed which was a little bouncy, not tippy. Luxuriously quiet driving over chassis twisting ramps and driveways.

All-around the solid construction supported by a well-tuned suspension for nice cushioning is a pleasant configuration. Up front the Tiguan handles steering and power with a strut-type suspension setup. In the rear is a multi-link setup just like a passenger car. It contours the road well, I had tons of confidence through corners. Through the electro-mechanical steering system the Tiguan feels like compact car. Such a small size for an SUV with increased comfort.  From the raised suspension this is a dynamic vehicle in the VW lineup and in the compact SUV category. 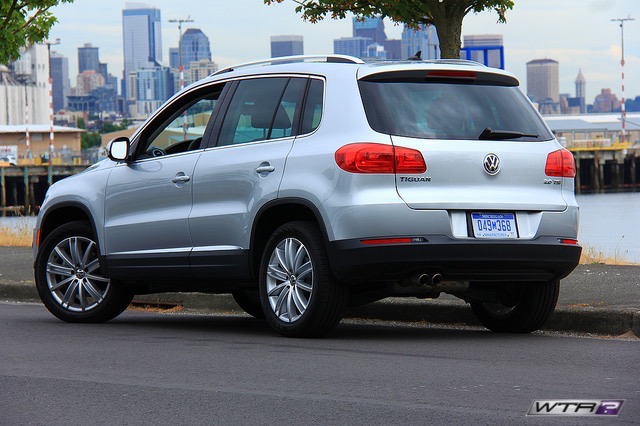 The Tiguan’s 3404 lb base weight and small physique helps with nimble handling and acceleration albeit it doesn’t offer the best in class for safety. The IIHS rates it as a four star crash vehicle placing it in the top percentile along with NHTSA’s rating of Good in four out of five tests showing a G (Good). Neither association gives it their top pick approval nonetheless the advanced airbag system, newly optional CAR-NET Security and Service features and electronic traction systems are proven lifesavers. 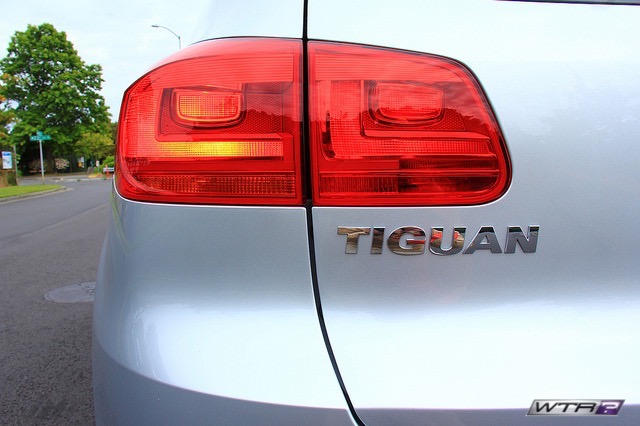 New this year is an optional evolved VW CAR-NET system referred to as CAR-NET Security and Service. This is a remotely controlled system working in tandem with your smartphone to connect with your car or through the vehicles touch screen. Owners will be able stream data about the vehicle to their VW app and right in the cabin. Along with enhanced emergency and other safety features an owner will be able to see the diagnostics for scheduling service on-time, receive roadside assistance, lock, locate and check the status of many parts of the vehicle. A one year subscription is just under $200 or you can try it for $17.99 a month. 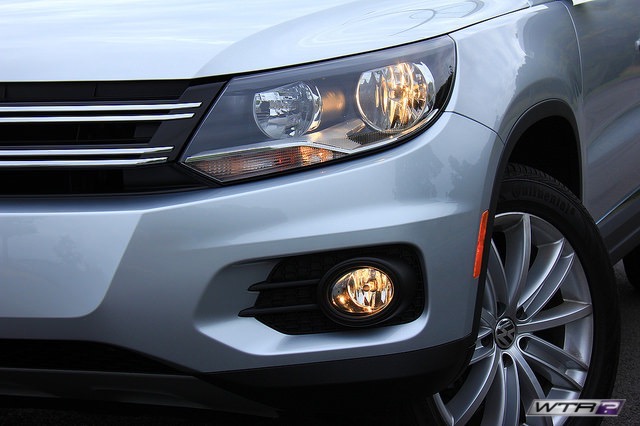 Our test Tiguan vehicle was assembled with halogen lighting which is standard for base S models this year which I thought was pretty good for the ancient yellow hazy glowing lighting technology. It must be the big headlight reflector housing doing such a good job focusing illumination down the road. This year the mid-level models starting with the SE line are standard with adaptive bi-xenon headlights with super bright LED daytime-running lights in a gorgeous U-shape. Working along with the headlights are a set of foglights and corner lights that fire on when you turn the steering wheel more than a quarter turn. Safe, smart and visible is the new automotive lighting fashion which VW is leading in, in this vehicle category.

Getting into the driver’s seat was super easy. The Tiguans has the great height for easily getting in and out. While sitting in the driver’s seat I was impressed with the large windows and upright stance. I had proper visibility unlike most cave-like sports cars. Whether you’re Tiguan has standard 16-inch wheels up to the optional 19-inches the ride height stays the same for a pleasing experience not climbing up or crawling down. 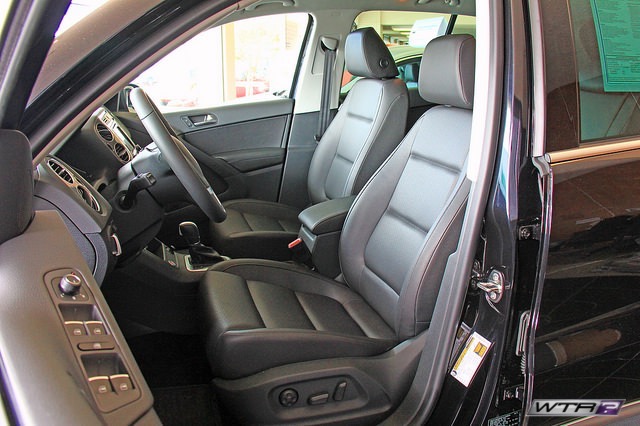 The base S model Tiguan comes standard with leatherette heated front seats, adjusting rear seats for more legroom that split in a smart 40/20/40. This allows up to 56.1 square feet of cargo space. The base model comes with a semi-power driver’s seat and manual passenger seat however upscale models with leather or top-end SEL Vienna leather come with full power driver’s seat and semi-power passenger seats.

The most important news about the 2016 Tiguan is that VW has updated the infotainment system with their latest MIB system now with easy USB, AUX and bluetooth smartphone integration. Standard models receive a five-inch touch screen along with a rearview camera and optional is a 6.3 inch touch screen with enhanced navigation display in high-definition. The new screen designs add to the Tiguan’s clean interior styling of soft plastics, brushed aluminum and crisp lines. 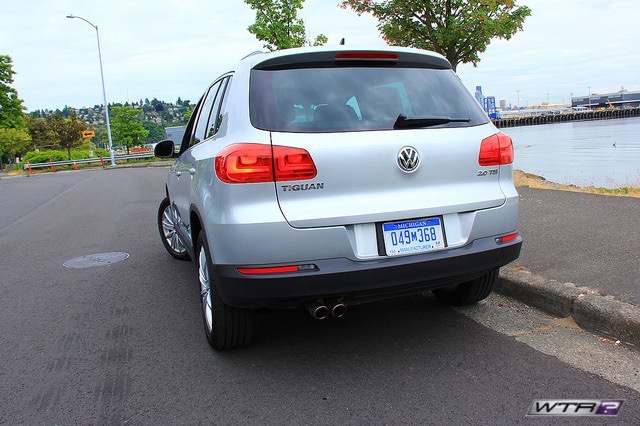