Large SUVs used to rule the universe – just like dinosaurs.

It was when we Americans were thought to be invincible. No military mission or economic setback would hurt our stride. We came back stronger than ever in the 1990s. We also enjoyed tech money and spent it wonderfully.

During the time, the SUV was the big thing for Americans. Everyone sold at least one. That included luxury brands.

For 1998, Lincoln jumped into the pool with its own luxury SUV – the Navigator. It started out as a Ford Expedition, where Lincoln’s designers added every brand-relevant touch possible to fit onto its big body. They made it posh and elegant inside, too.

Over time, this became a Lincoln that one either loves or hates. There is no enough space to get into discuss the reasons why anyone would love or hate the Navigator. The Reader’s Digest version is this: One loves it for the sheer size and luxury of it and one hates it because of the sheer size and luxury of it. Ask the peanut gallery when they first saw this one show up on their social media screens…oh, and they went a little further on their love or hate of the Navigator!

It really comes down to this question: Does the Lincoln Navigator make any sense for anyone wanting to buy a large luxury SUV from a domestic automaker? I drove it. Now what? Here’s the review…

A mid-cycle refresh for 2015 integrates Lincoln’s new face and design attributes. Up front, the refreshed look works with the “split wing” grille and horizontal bars. Headlamps shine brightly, though some LED lighting in the housing and below the bumper also help illuminate the road and itself. The side profile remains the same; the big concern was out back. The full width tail lamps appeared to emulate a theme seen on the MKC, but a bit more squared off to fit the Navigator’s shape. On the plus side, no one can mistake a Lincoln Navigator from the back. 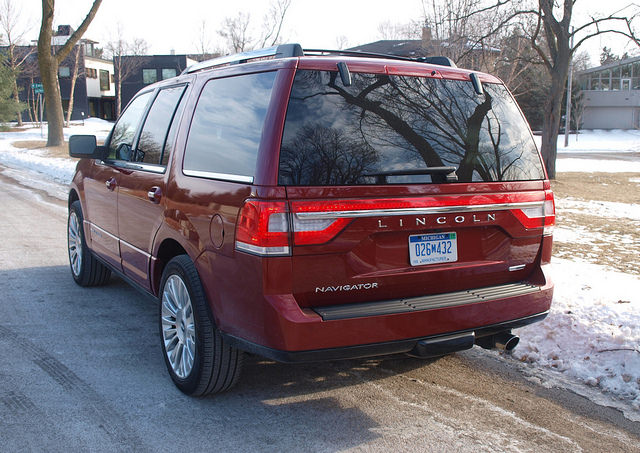 This Ruby Red tester is the short wheelbase model, which makes for an interesting mix of details. The Reserve trim adds 22-inch wheels to the package. The jury is still out on whether anything beyond 20 inches is a good idea to install on a vehicle. I will admit it adds character to the Navigator. On the plus side, I appreciated the power running boards that extend when you open up any door. They are also heavy duty to keep a big fella like me from destroying them over use. It will certainly come in handy for those who truly need this feature to step into the Navigator.

Inside is a mix of familiar Ford/Lincoln features and some details that lend to further questions. When the current generation of Navigator was introduced, a few of us pointed out the heritage design of the dashboard – pointing to the 1961 Lincoln Continental. While it sparks nostalgia, it seems it needed more than the leather and plastic from it being a bit minimalistic for the Navigator’s design and image. I was hoping for more chrome or satin finishes to make it stand out more – even the HVAC vents could use some zhushing!

However, the addition of Lincoln’s customizable instrument binnacle – with switchable screens on either side of the speedometer – adds more of a tech look to the Navigator. The center stack has MyLincoln Touch powered by Sync, which is useful and quick. Phone pairing was quick, as is start-up connection through the Bluetooth connection. HVAC switches have improved with actual slim buttons instead of the sliding logic seen on other models. Other switches are familiar and useful – as intended in every Ford and Lincoln.

Seats are of a decent size and offer enough cushion and back support for the first two rows. This tester came with a set of second row bucket seats without a center console between them. The third row is simply for children and can fit three car seats abreast in the rear. By not having a center console in the second row helps in gaining third row access. For more cargo space, the third row is split with power operation for a completely flat floor. Front seats offer a great command position for all drivers. The gear selector is in a thick front console that has a huge storage bin underneath the armrest.

For years, the Navigator had been powered by a decent V8. For 2015, the V8 era has come to an end. Instead, Ford dropped their 3.5liter EcoBoost V6 with twin turbochargers under the big Lincoln’s hood. With 380 horsepower and 460 pound-feet of torque, the engine seemed comfortable carrying 6,069 pounds of large luxury SUV. A six-speed automatic transmission helps send that power to all four wheels. Several buttons on the lower center stack help the driver choose from two-wheel drive, four-wheel drive or an automatic mode that switches between the two.

When roads are smooth, the Navigator offers a very luxurious ride. However, drive the Navigator over a bump or a lumpy piece of road and it will react accordingly. The culprit is the 22-inch wheels on this Reserve model. With such a large wheel, it is anticipated that ride quality would be affected. Handling is also on the soft side. Snow and ice grip is decent, as long as four-wheel drive is selected. The Pirelli Scorpion tires offer decent grip, even with its 22-inch size.

From a large wood-and-leather steering wheel, you would be surprised how quick and sharp the steering system is. It can do tight maneuvers just fine and react accordingly. However, the large wheel feels a bit loose on-center. Braking is actually quite good for a large SUV. Normal, panic and winter stops modulate well with good ABS control.

No one expects great fuel economy from a Navigator, though Lincoln is making it clear that the EcoBoost will return better consumption than ever. In truth, the Navigator turned a fuel economy average of 15.7MPG. 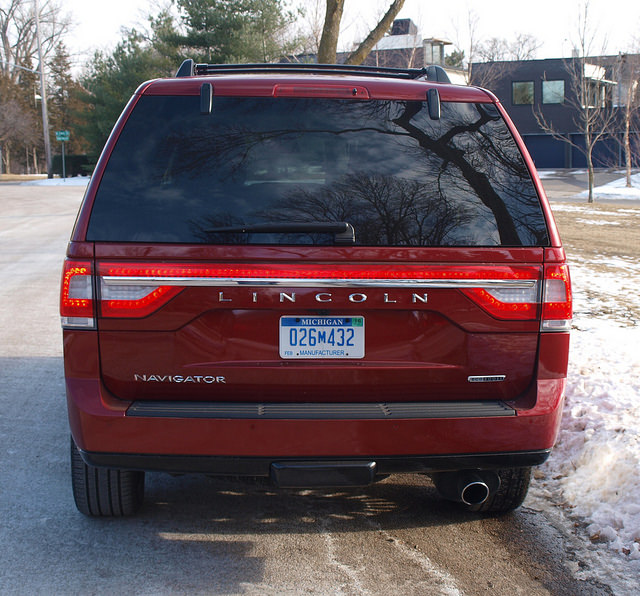 – If you are into large things, the Lincoln Navigator will satisfy that need – and then some. This is perhaps the best description for this vehicle I can think of.

– The EcoBoost V6 helps for those looking for better fuel economy. Yet, it does a good job taking this massive machine places. Yet, there are plenty of arguments for and against it when compared to a V8. The EcoBoost is not bad, though…

– Consider the competition for the moment. The Lexus LX 570 is a very capable off roader, but the price is pretty steep. The Cadillac Escalade offers more bling, but, again, it is more expensive. Then, there’s the Infiniti QX80. The price point is more and offers another level of luxury in this class. This means that the Navigator could actually be a greater value than once thought!