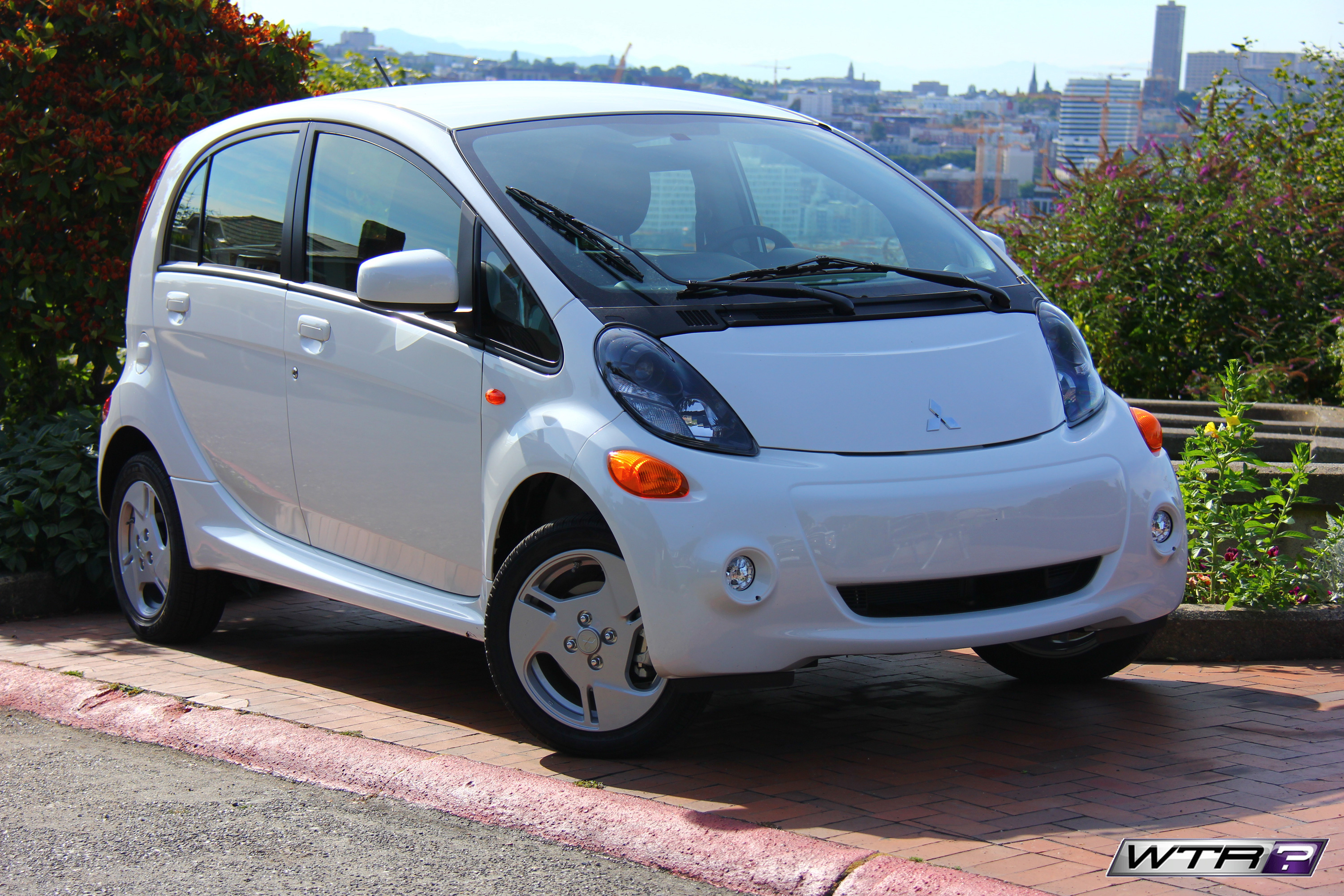 The Mitsubishi i-MIEV is now in a respectable fifth year of production of it’s first generation. With a few updates this all-electric vehicle will go mostly unchanged from the previous year. It’s been one the most affordable EVs on the market since its release. This has contributed to it’s success and continuation. Now with a little lower base MSRP $22,995 and a federal tax credit of $7,500 will get you in the driver’s seat for $15,495. This has directly attacked similar sized EVs like the Chevrolet Spark EV and Nissan Leaf which sell for thousands more. I don’t think the i-MIEV is getting the coverage it deserves for its value.

Mitsubishi’s four-passenger, five-door hatchback is the second smallest electric vehicle next to the SMART EV from Mercedes-Benz. At an overall length of 144.7 inches it’s considered a micro-car although the i-MIEV carries almost as much interior passenger volume as its larger competitors like the Leaf. Another stand out feature from the rest of the comps is it’s rear-wheel drive structure that offers a unique feel. The only other affordable rear-drive EV is the smaller 2-door SMART car in a vast front drive EV dominated industry. 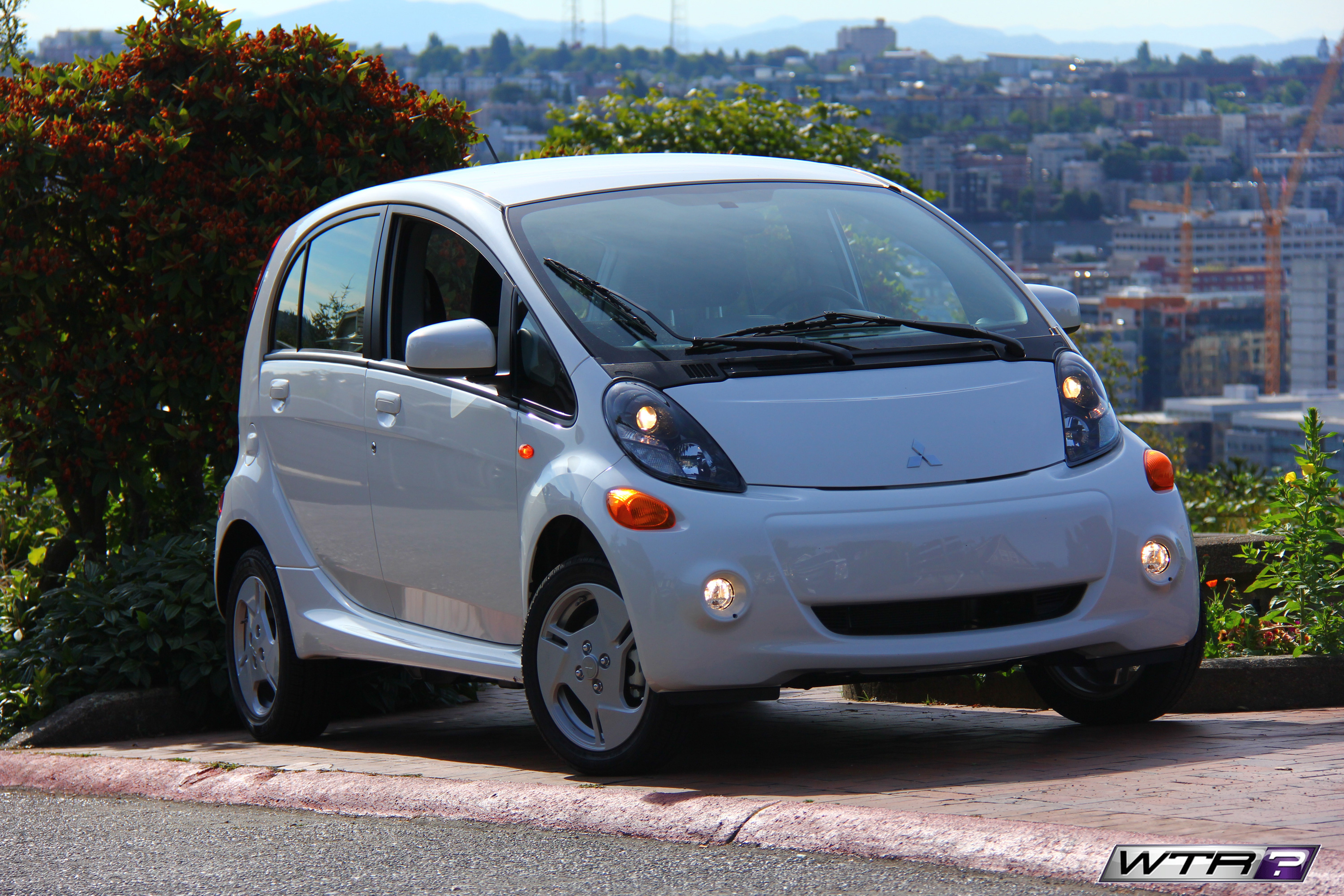 The primary reason I chose the i-MIEV is because it is purely everything you need in a car for city living. Low costs, safety and less time wasted at the dealer with maintenance. Let’s start with the expenses of owning a pure electric vehicle. It’s close to nothing. They have almost no maintenance compared to gasoline and diesel burning  cars. No weekly refueling, oil changes and no more little moving parts in a complex expensive engine to fail. 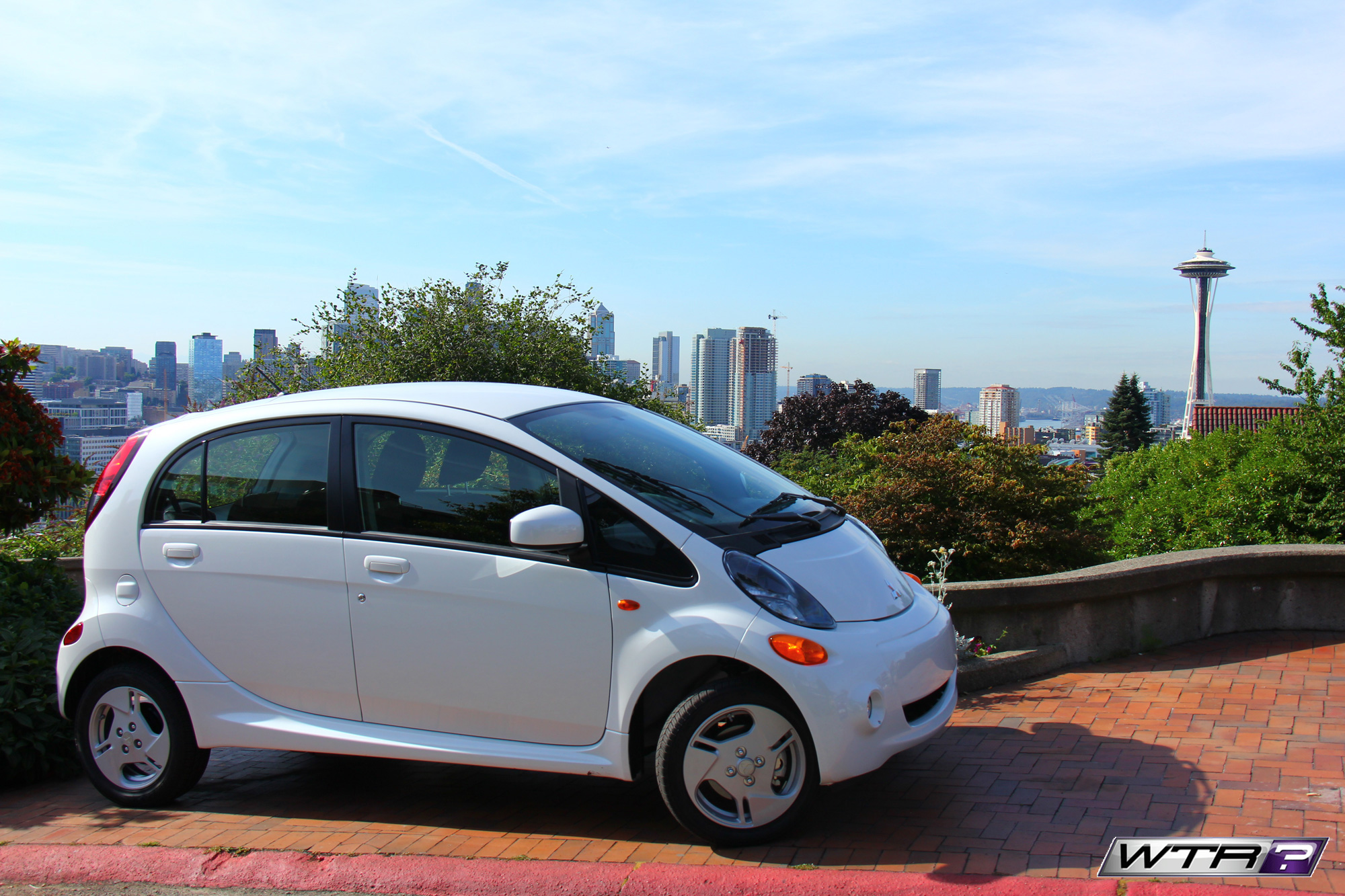 After obtaining proper pressure in the little tires, I was able to really feel how responsive the steering and suspension is. Rear wheel drive is a sport driving feature that is entirely different feeling animal than a front-drive car. The body feels crisp but any rough roads really beat it up. Driving over train tracks and potholes I had to use some skill to keep control though it stayed straight in lane with ease.

Articulating through turns and switching lanes was a breeze. Body roll was a little more than I expected but predictable. Keeping power planted in the rear is a 3-link De Dion suspension. Lightweight MacPherson struts handles steering up front. This year Mitsubishi has enlarged the rear wheels and tires now delivering a staggered setup. This brings out a rear-drive stance and more driving performance. It’s noticeable over previous models I’ve driven.

Right at zero RPM the i-MIEV’s synchronous permanent magnetic motor is able to achieve maximum torque without having to build up speed like a piston engine. Electric motors are famous for having all the power right off the line. The 108 lb rear-mounted electric motor is attached to a brilliant one-speed automatic gearbox. It felt as smooth as a CVT and as connected as a manual transmission. This year Mitsubishi has added the luxury of insulation to the motor mounts, reducing all NVH throughout the vehicle, hushing the cabin.

Performance is not the first thought when you look at the i-MIEV. Examining the chassis configuration you’ll see the thoroughbred thinking. Balance is at the fulcrum of this vehicle. Juiced with power by a chassis laid surfboard battery pack providing a lower center of gravity. This board of batteries is comprised of 88 individual lithium-ion cells and offers a real world range of approximately 62 miles. 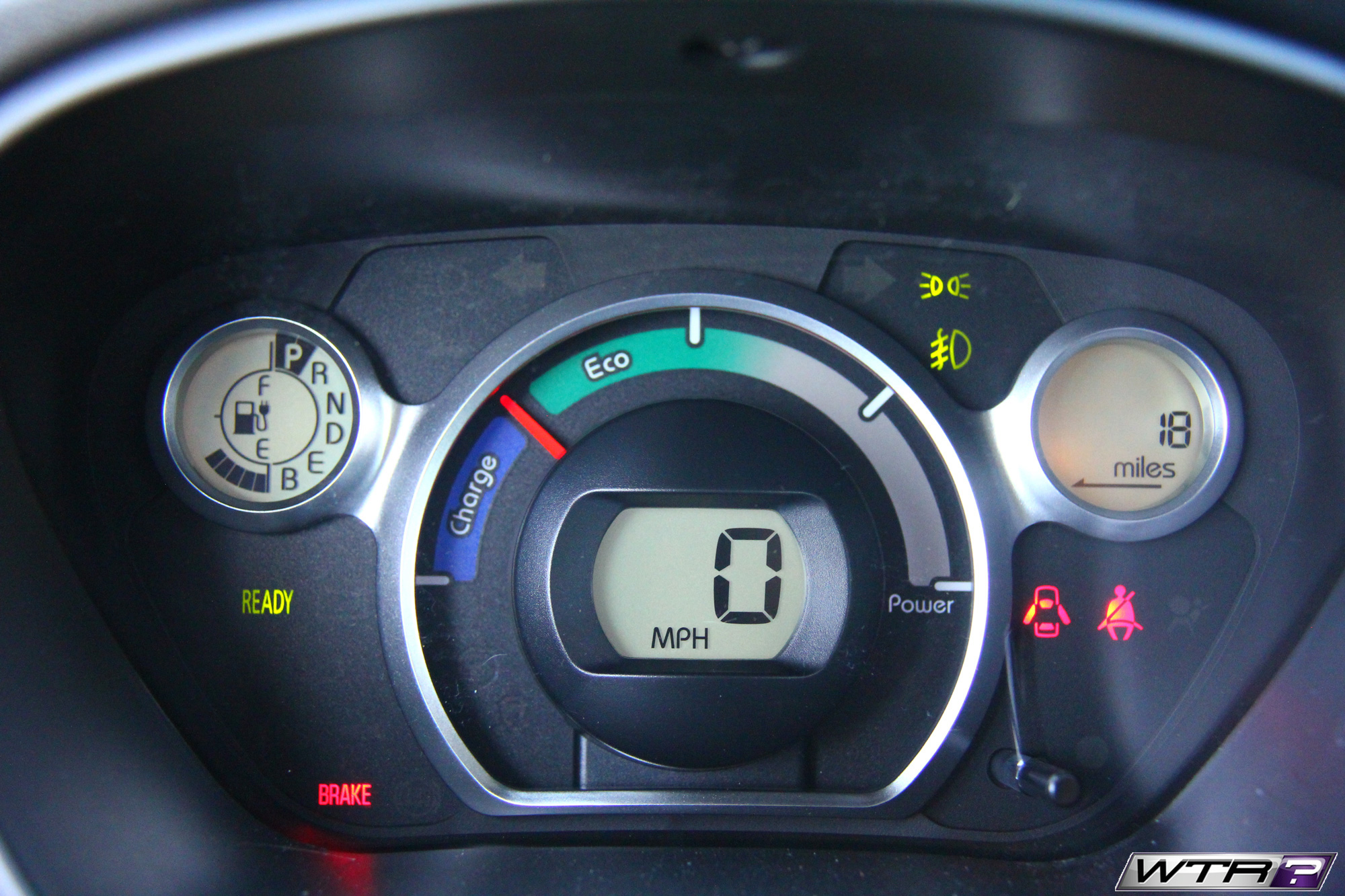 Mitsubishi’s  MCU control masters communication through the drive system and is fast to respond. The entire system output is a mere 66 BHP and 145 lb-ft of torque at zero RPM. It is well calibrated for proper take-offs and motor braking it has a practical torque curve for efficient driving or kicking the tail out (on a closed road).

As interesting as the look and feel is the charging capabilities for this little Japanese jelly bean. Charging is well thought out. There are three charging ports for four different currents. One port is a CHAdeMO plug that is rare at this price point. Using the standard charging cable with a household outlet at the 8A setting will get you fullup in 22 hours. Then at 12A on the same cable lowering full charge times to 14 hours. It also has a 240V/15A setting for 7 hour charge and the fastest is the level 1 charging port, CHAdeMO, getting you to 80% in around 30 minutes. It was about 24 minutes for me from almost zero charge. Not even enough time to shop for groceries. 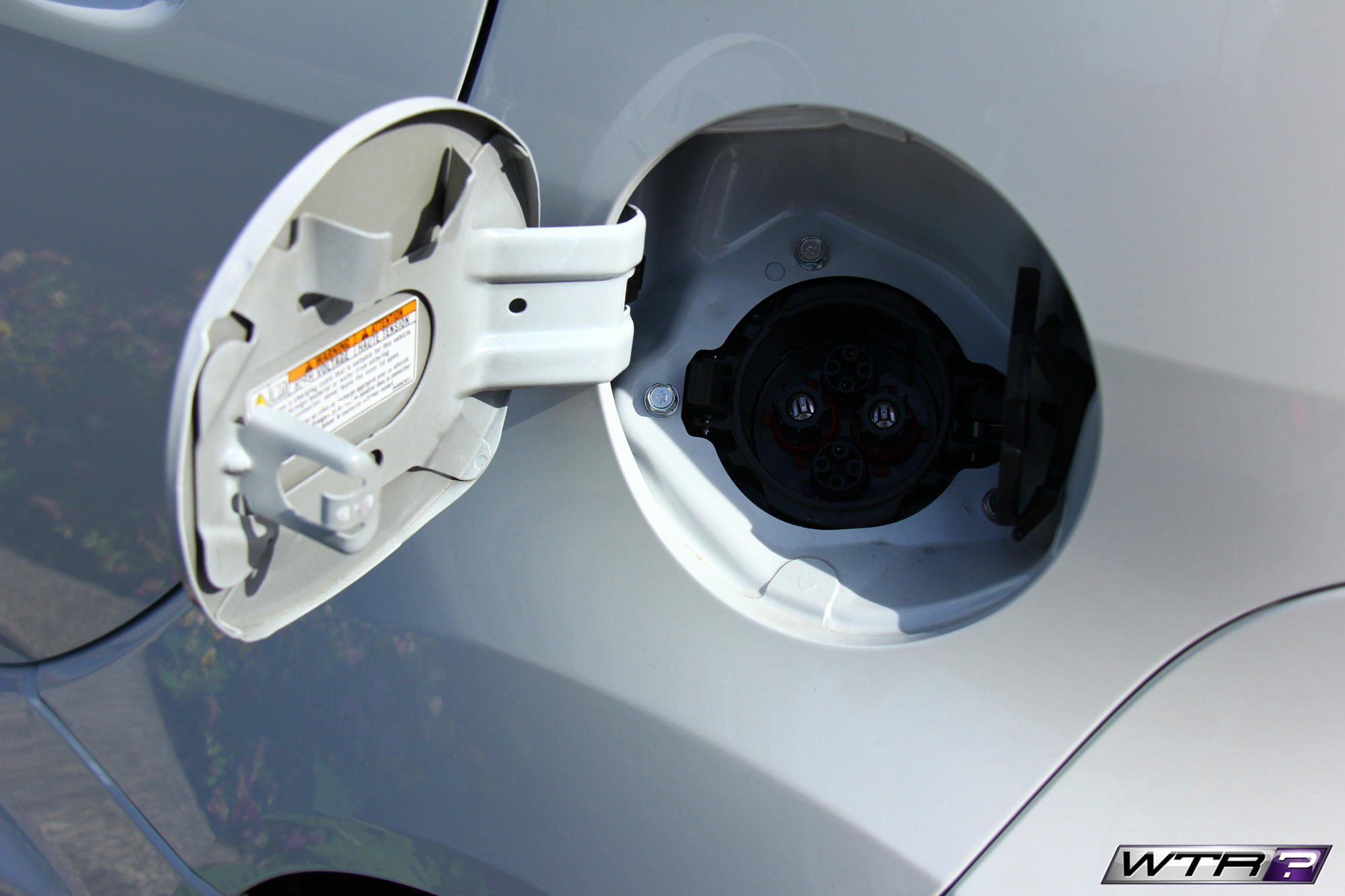