By James Hamel and Adam Fredricks

We should preface this entire review by saying that you can get into a whole mess of trouble owning a 2014 Dodge Charger SRT-8. Just look at our video review piece co-produced with CarCultureTV.com where our performance test driver Adam gets pulled over and arrested for being a scofflaw and making use of all 6.4 liters of Hemi V8 engine which puts out an eye wateringly terrifying 470 horsepower/470 lb. feet of torque. Terrifyingly fast the Charger SRT-8 is but the most surprising thing about driving it is how composed it feels even when accelerating at ludicrous speeds. You really have to try to get the rear end to break loose.

Actually, if you believed we filmed ourselves getting pulled over in such a hyper stylized manner, we have a bridge in Brooklyn we would like to sell you. But back to the point, the 2014 Dodge Charger SRT-8 is a true performance bargain with prices starting at $46,385 and our fully loaded model with adaptive cruises control, Harmon Kardon 19-speaker audio upgrade, power sunroof, 20-inch wheels, performance tires, upgraded tan Laguna Leather Seats, blind spot monitoring, heated/ventilated front seats, auto on/off headlamp high beams and more for a still reasonable $55,540 including destination. Try to name a car with this much performance at that price. 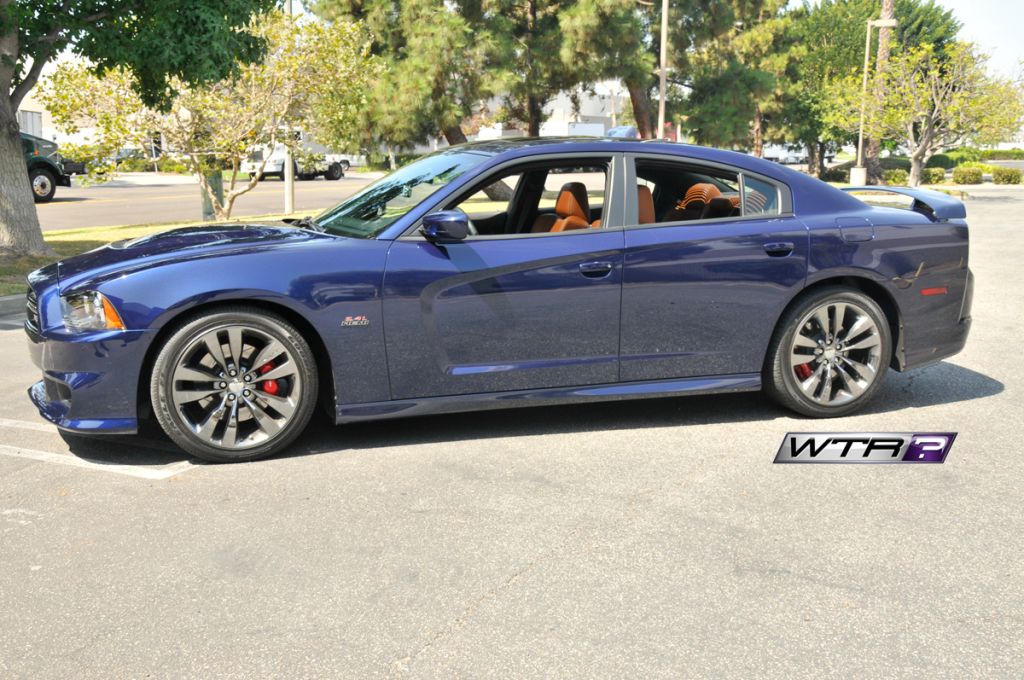 Admittedly the Charger SRT-8 does have an EPA fuel economy rating of 14 city/23 highway qualifying it for a gas guzzler tax (in reality we normally averaged 12 miles per gallon with a high of 18 on the highway). But if frugal is what you are after, you are looking at the wrong car. What the 2014 Dodge Charger SRT-8 allows you is to own a ridiculously powerful yet roomy and useful sedan that is comfortable on freeway jaunts and also capable of feats of tail out glory on a race track. How is this possible?

Well, via the touchscreen on the center of the dash you can put the car in regular Touring, Sport or Track mode. The first setting is best for drives with the family on the freeway to visit their Grandparents because when Sport mode is activated the dampers are firmed up for improved handling but there is some noticeable ride deterioration. Track mode goes one step further by speeding up the five-speed automatic’s shift times for those times when you want to be able to accelerate as fast as possible out of an S-turn. The dampers are again firmed up so the car will remain flat during track cornering and crash into every pothole on normal city streets. So save that one for the track.

Now, our resident professional driving expert Adam Fredericks owns an older, tuned and tricked out Charger SRT-8 so we will hand this over to him to find out how he felt about the standard issue 2014 Dodge Charger SRT-8. All we can say is, the SRT-8 version of the Charger is so fast that we are just more than a little scared of the new Hellcat. Not that we aren’t dying to try one out. Let’s hope Dodge hears our not so subtle hint. 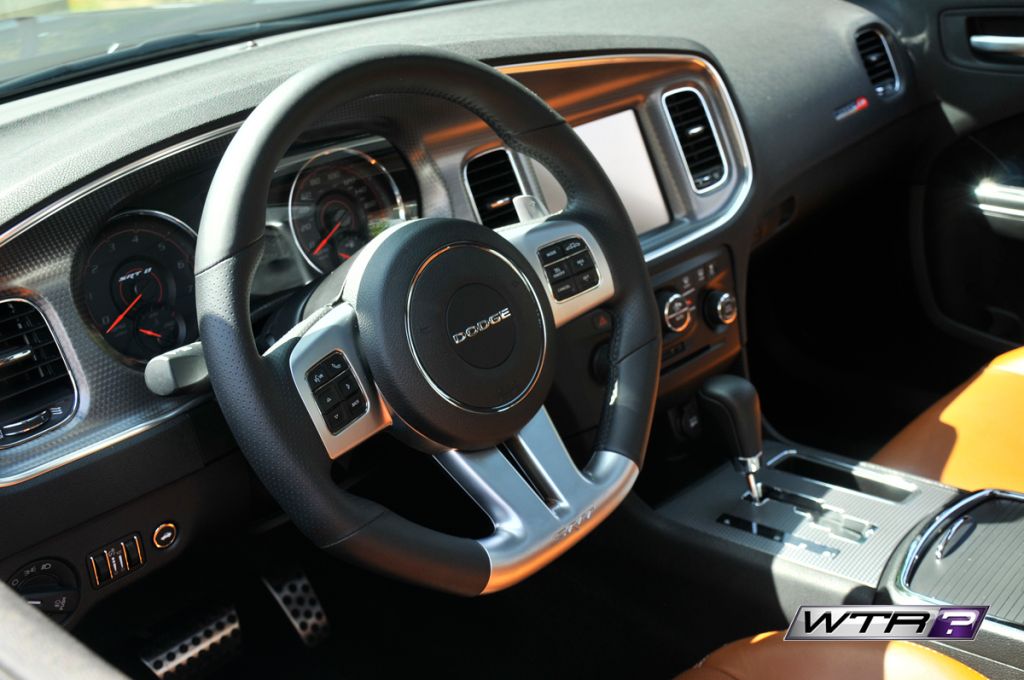 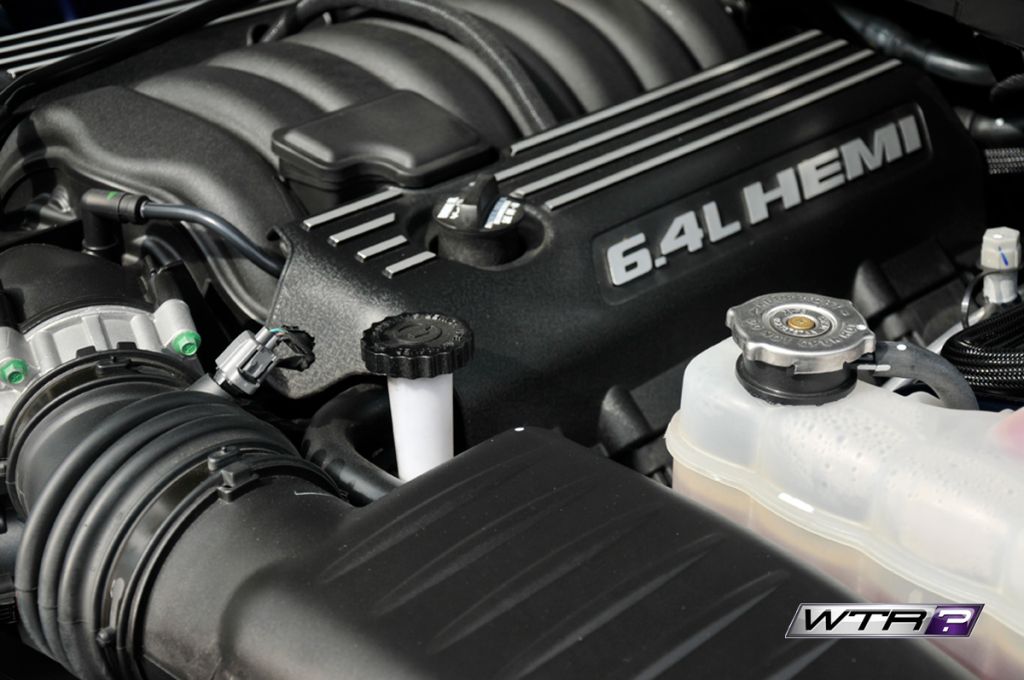 Notes from the Peanut Gallery

The 2014 Dodge Charger SRT8 is a platform that demands respect because even as you walk towards its menacing stance your palms will sweat and your hands shake. Your heart will beat in anticipation of pressing down hard on the accelerator and make you wish you were at an open race track and could scream, “Please anyone… Please Race Me!!!”

I’ve been a long-time fan of MOPAR’s SRT line up from the Jeep Grand Cherokee SRT-8 to the old Neon SRT and all the way up to the latest Viper. When Ralph Gilles, President and CEO of the SRT brand, stamps “SRT” on a machine, it truly means something. The Charger’s 392 cubic inch 6.4 liter V8 propels this four door sedan into a sub 13 second quarter mile right out of the box. If cars actually came in boxes.

Even weighing in at over five thousand pounds this car does more than just go really fast because, well, it stops really well too. 60-0 in 120 feet thanks to the standard BREMBO brake package on the Charger SRT-8. So with an MSRP of just over 46k, you get a 470hp/470 ft. lb. of torque 175mph four door sedan that does 0-60 in 4.5 mind blowing seconds. Can you say best bang for the buck? 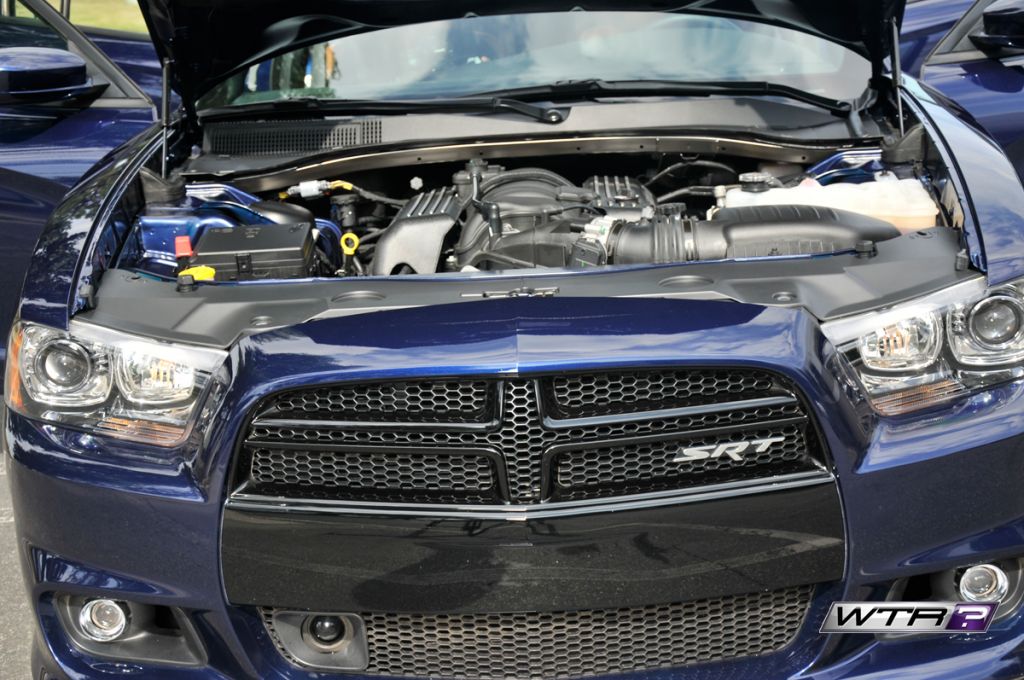 As far as potential modifications go, I might install a high performance programmer with a cold air intake then drive down to the local muffler shop to get a stainless steel sport exhaust system welded up and then the car would be clear into the 500+ horsepower range. Depending on how aggressively a person tunes their Charger SRT-8, you could looking at 190mph+, 0-60 in 4 seconds and a quarter mile in the low 12’s. Do, however, check with Dodge before making any modifications because some may invalidate your warranty.

What is most beautiful about the SRT line-up is that it allows the middle-class a chance to play with performance usually reserved for AMG and M-Power automobiles costing twice as much. Right off the showroom floor your SRT is ready to race and if you invest in some bolt on modifications you will dominate your track competition! Mine has been very reliable with better than expected miles per gallon considering the way I drive.

I really was impressed by the updated interior in the 2014 Dodge Charger SRT-8 which is extremely comfortable and luxuriously appointed as well. The passenger cabin is huge with enough room for long family road trips and the trunk is an enormous 16.3 cubic feet. From the well-appointed heated and ventilated front leather sport seats to cup holders that either cool or warm your favorite beverage, the interior of the 2014 Dodge Charger SRT-8 is top notch in every regard.

Honestly I can’t say enough good things about the 2014 Charger SRT-8 but 2015 will bring a whole new beast with a number of exterior and interior styling enhancements as well the announcement of the Charger HellCat. In that car Dodge is putting over 700 horsepower at your disposal with a sticker price just north of 60 grand. The times this machine puts out are well into the realm of supercars costing hundreds of thousands of dollars. Rumor has it that a new higher performance Viper will come equipped with a supercharged V10 producing well over 800 horsepower as well. No matter what the SRT division decides to do next, the future looks bright for this Detroit based dream maker. 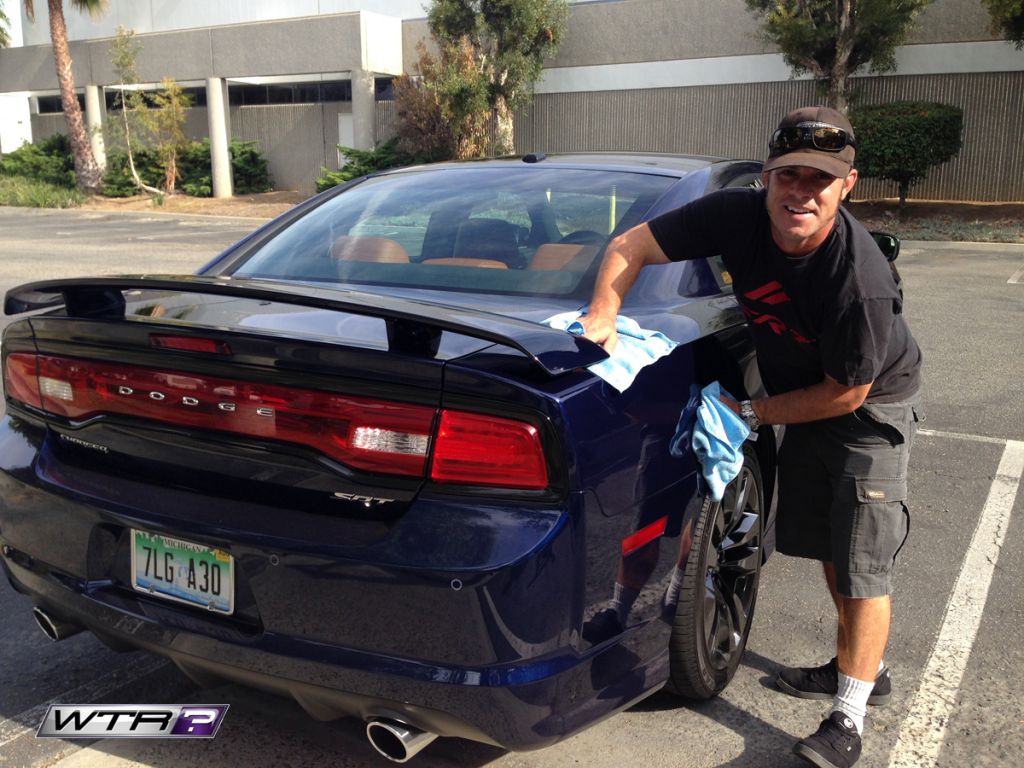