Families that enjoy bring together must be transported accordingly. 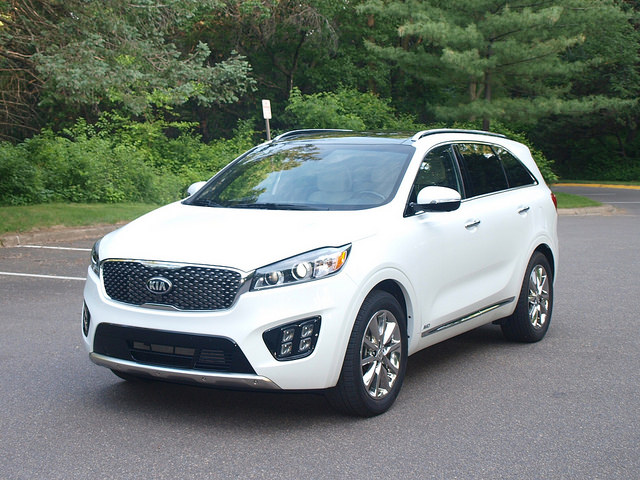 Translation: a family of four with growing children, or a growing family that might need a third row of seating in a vehicle, will need some way to get to school, work, after school (or work) activities, the weekend away…life.

Tall order, isn’t it? Not really, since this automotive market has responded to their attempts at trying to woo families towards these conveyances. In turn, crossovers and SUVs are driving the market right now. That is because every automaker has hit the right note with the families with their offerings.

The crossover/SUV of today is like the station wagon of my youth – offering a high level of amenities to make families enjoy the space and comfort of life, while satisfying the driver at the same time. 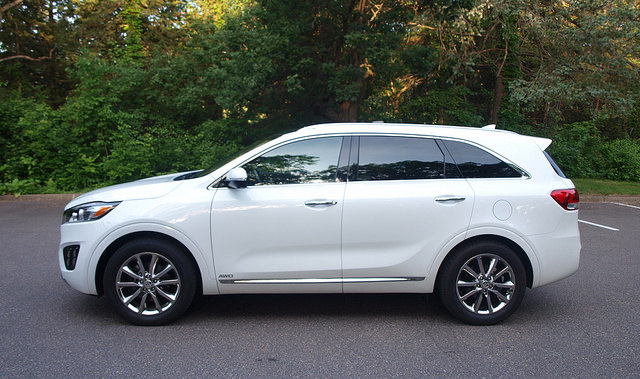 Since almost every automotive brand sold in this country has a crossover/SUV to offer, the question is which one to choose from. That means doing the research ahead of time, driving every potential vehicle worth considering and subjecting your brain into a game of bracketology…or something along those lines.

There is no one answer to this quest towards finding the right vehicle for your family. There is something to consider: An award. The vehicle I am reviewing here was recently given the distinction by J.D. Power and Associates as the “Highest-ranked Midsize SUV in Initial Quality.”

That is a major award. J.D. Power carries a lot of weight among automakers. However, this vehicle was truly worthy of this accolade.

Of course, I am talking about the 2016 Kia Sorento. Instead of talking about, I need to prove that there was more to this third-generation mid-sized crossover than just the award it was given by J.D. Power.

The 2016 Sorento is part of the second wave of Kia design first dictated by Peter Schreyer. Newer elements call for larger “Tiger grilles,” bold detailing, blunter front ends and premium touches. Granted, Kia has a very wide lineup, so some of its “upper offerings” will get more premium looks than others. Sorento certainly went decidedly upmarket with this new generation model with the new look up front and towards the rear. They also softened the roofline and glasshouse from the last generation model to complete the upscale feel.

The SX Limited (sometimes called the SXL) model tops off the upmarket look with more chrome trimmings all around. The chrome nineteen-inch alloy wheels set the SX Limited apart from the rest of the Sorento lineup…and some of its competition. Then, there are the four-lens fog lamps that anchor the bumper area. In all, the Sorento is very distinctive in a segment where standing out is rewarded handsomely. 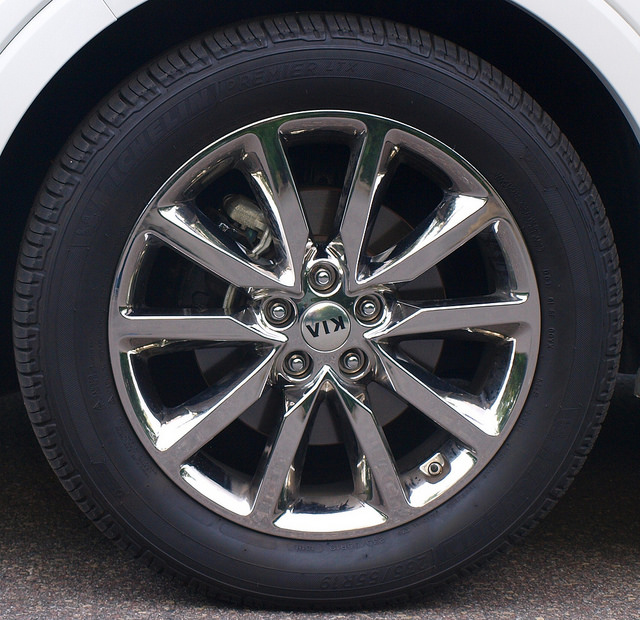 Distinctive also describes the interior of the new Sorento. The instrument panel now includes a TFT customizable center “dial” for the speedometer and driver information cluster. Other dials flank the center one, which includes a tachometer, plus fuel and temperature gauges. The readouts are clean and very informative. Onto the center stack, the UVO-driven touch screen is set at about eye level, but rather useful in itself. Switches are minimized for audio and climate control functions. Even the center console is useful with switches located away from the transmission selector. It replicates Kia’s cockpit design seen on its newest models, including the Sedona minivan.

The SX Limited’s Ivory Nappa leather seats are inviting. However, they are on the firm side up front, yet bolstered enough to lock you in. There is plenty of space for most bodies up front and in the second row of seating. The third row is strictly for children, though overall interior space is up in the 2016 Sorento. Cargo space is expansive, starting with 11.3 cubic feet behind the third row to a better 38.0 cubic feet with that row folded down. With the second and third rows down, you have up to 73.0 cubic feet to pack up on a shopping spree. 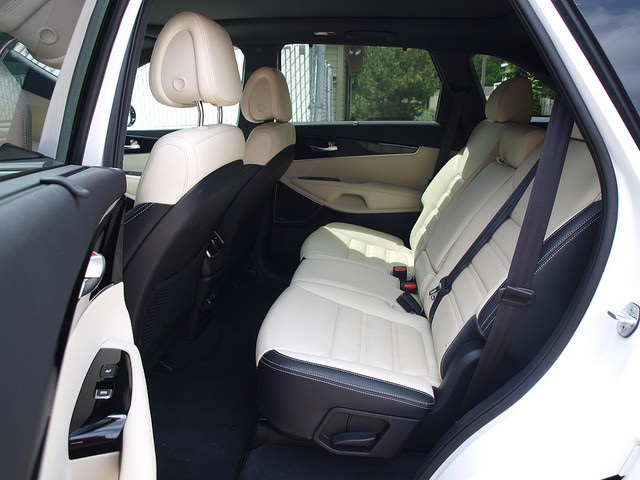 For infotainment, the combination of UVO and Infinity is definitely on point. A clean navigation screen, audio choices, quick Bluetooth pairing and syncing, and excellent sound combine into one of the better sonic environments in its class. There is one thing I would like to suggest: Mobile app syncing, including Pandora. That would make this UVO-driven system perfect.

Under the hood, a 3.3liter V6 powers this 4,343-pound crossover with the greatest of ease. There is 290 horsepower on tap with 252 pound-feet of torque of fluid power. Connected to a six-speed automatic transmission and Kia’s all-wheel drive system, the Sorento has no problem carving up traffic on the freeway, easing through the city and relaxing on a country road.

The relaxing part is what makes the Sorento a compelling choice. The ride is so supple and smooth, it could be one of the smoothest riding vehicles of its kind. There is a smidge of roll…just a smidge. It corners well and tracks quite nicely on the road. Not to mention, it is quiet. Just turn down the radio and you will be in a muted cabin worth riding in. In terms of driving dynamics, the Sorento was designed to keep everyone happy…even the kids in the third row.

Steering may seem numb, but it is actually a good electric system. Wheel response and feel are very good, with a nice turning radius for a vehicle of its type. Brakes are also very responsive and linear, providing solid normal and panic stops. 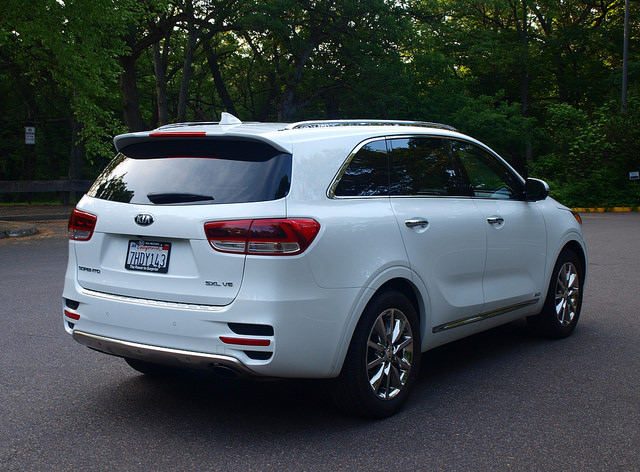 If there was one concern about the 2016 Sorento with the V6 engine was fuel economy. According to the sticker, it should average 19MPG, which is rather low. In all, this SX Limited tester did turn out an average 21.0MPG – higher than the sticker, but still low in today’s standards.

Base price for the Sorento is $24,900 for an L four-cylinder, front-wheel drive model. At the opposite end of the spectrum was this SX Limited tester with the V6 and all-wheel drive. The sticker price of this model came to $46,695. 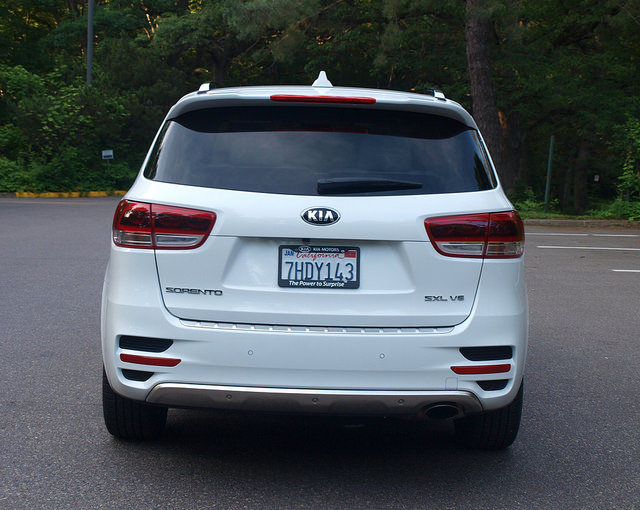 – Award confirmed! The 2016 Kia Sorento not only improved in every aspect over the past two generations of this vehicle. It could become the standard-bearer in its class. That is a pedestal which is quite lofty, considering the volumes in which crossovers and SUVs are selling these days.

– However, the 2016 Sorento has earned this accolade with flying colors, thanks to a stand out design, high quality inside and out, good performance, a quiet ride and space for a family of seven. I believe that sums it up…

– Actually, there is one more point to make. In a crowded field, you have to stand out by doing things a little bit better than the rest. A little bit may not be enough, even in the eyes wary consumers inundated with many choices for their family transportation. When J.D. Power and Associates bestows an award saying that your vehicle is the best in something – initial quality in its class, in this case – it makes the decision-making process easier. Score one for Kia, then! It was very worthy of this award, indeed!