It is true what they said about General Motors’ large SUVs – they are indeed large and in charge. 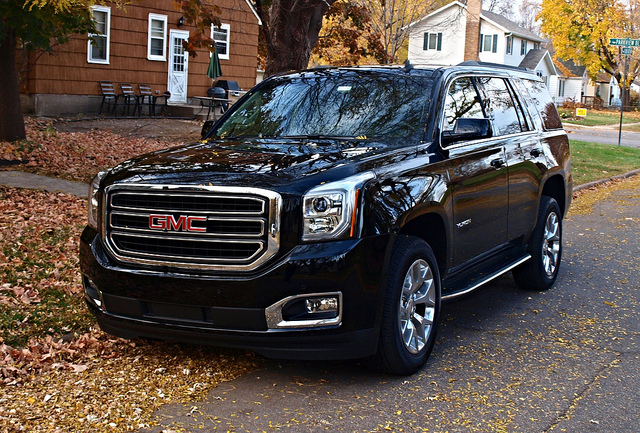 They remain very popular with families who need a true three-row vehicle with excellent cargo space without resorting to a minivan. If you go anywhere, you will find at least a few at any shopping center, big box retailer, school parking lot, city park…and so on. Families who own them love them to death. Livery service operators love them equally, as they have become the new “town car” – order an Uber on your phone and one of those big black GM SUVs will come pick you up.

Some have said that GM’s big SUV essentially nullified the minivan market. Not entirely true. Some also said that they are too big to have around and needs to be eliminated for a softer car-based version. Not even going to happen.

Why would anyone hate on success?

The success of the big SUV is why GM developed one on its new truck platform. The result is this 2015 GMC Yukon. There is a lot riding on this product, though it essentially sells itself.  However, there is a growing number of smaller alternatives that are indeed car-based that have taken the lead in the crossover/SUV market of late.  The Yukon, along with its larger brother – the Yukon XL – and its Chevrolet cousins still sell well despite all of the arguments against them. 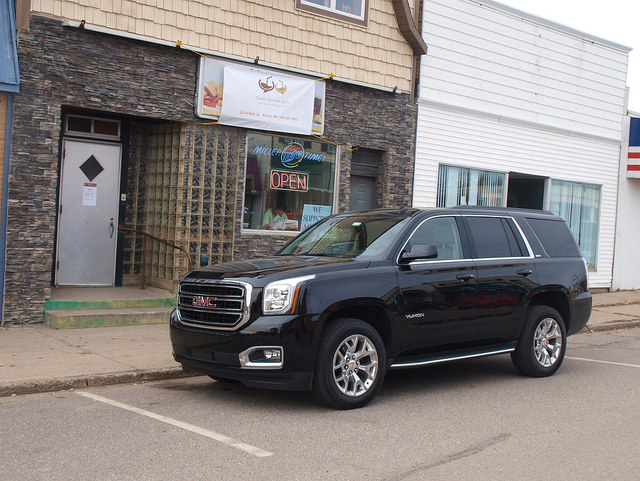 It brings up the question of whether the Yukon is still relevant in our market? Our black Yukon SLT tester would provide all of the answers we had for it.

Before we go onto its looks, one thing already surprised us. While we had this image of the Yukon (along with the Chevrolet Tahoe and Cadillac Escalade) as being “large and in charge,” it is much smaller than we think. A parking test at our Minnesota facility showed that on a small slab where some of the test vehicles are kept, you can fit the Yukon and a smaller crossover in the same area without spilling over onto a neighbor’s property. The reason is this one specification: It is only 203.9 inches long. That is about the length of a full-sized sedan.

Because it is short, there is a lot of presence that the Yukon exudes. GM made sure that the brand has its own identity – Professional Grade, if you will – to make the GMC more distinctive and easily identifiable. That design language has been seen across the lineup, starting with the smaller crossover products – the Terrain and Acadia – along with its pickup lineup – the Sierra and Canyon. The Yukon has a bold look that is upscale and distinctive.

Our SLT tester is actually a middle of the road model. Though it looks luxurious with its chromed wheels and Onyx Black paint, we must be reminded that there is one more level to go – the Denali. Yet, the SLT offers a balance between humble and extraordinary.The first evidence is the twenty-inch polished wheels shod with sizeable Continental tires. Though they look great they are also a great for the SLT’s style and function.

GMC addressed the biggest complaint about its big SUV product – interior quality. It begins with a redesigned instrument panel that takes part of the full-sized pickup’s dash and adapted it for a more passenger car-like setup. Materials are of high quality and some switches are logical. Other switches take some getting used to. The center screen for the IntelliLink infotainment system is reachable for average-sized drivers to use the touch screen.

Instrumentation is comprehensive, as it comes straight out of the Sierra pickup. A center TFT screen dials through vehicle, trip and fuel consumption screens, adding to the analog dials for the speedometer, tachometer, fuel, water temperature, oil temperature and battery charge gauges.

The SLT tester came with a seven passenger seating arrangement. Front buckets are big, but feel firm even with the lumbar support dialed back. There is a huge console in-between that has a deep storage – mainly for the wireless headphones to use with the drop-down screen. Second row seats have a power “fold-and-tumble” for better access to the third row. This is also used for the “Captain’s chairs” available without a console in-between them. If the third row is not used, it will fold flat into the floor for a big cargo hold. However, the standard sized Yukon does not have the huge rear leg room the long-wheelbase XL will have.

The big news for the Yukon has been the installation of triple-seals on doors to cut down noise from coming in from outside. The result is a quieter cabin that allows everyone to enjoy the infotainment options available on board.

GMC’s IntelliLink is great as a concept. The good part of it is its integration with OnStar, where a phone call will send a destination to the navigation system and set up directions from where you are at. You also get Optional on this model is the 4G LTE Wi-Fi hotspot, which can connect up to seven devices at a time. Our tester did not have this, but it was tested on another vehicle this summer with positive results. 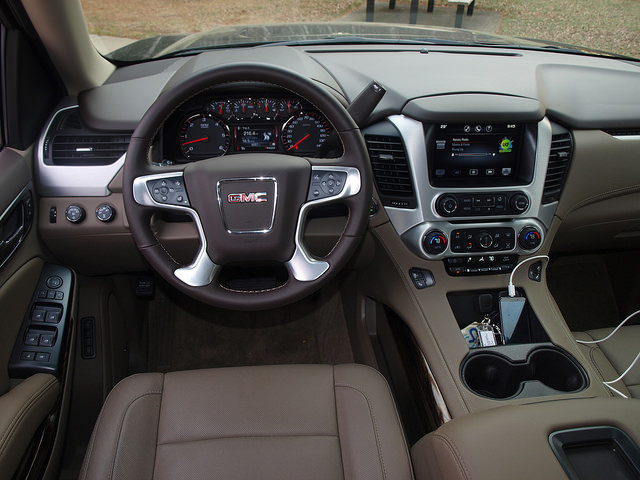 However, IntelliLink is not exactly the most intuitive infotainment system around. There were problems with some setups, especially with setting up the radio presets. There was some lag issues with the steering wheel-based controls going to each preset station. Using the TFT screen in the instrument panel to scroll through the presets is an added step that should be eliminated for quicker response to IntelliLink.

You do get plenty of sound options and Bluetooth connectivity filtered through a Bose 9-speaker speaker set-up that includes a subwoofer and surround sound.

On this Yukon, you get front and rear park assist, blind spot alerts with a lane change feature, a backup camera with rear cross alert and the safety alert seat. However, the best safety feature of them all is OnStar, with a suite of services that instantly send a signal for assistance in an accident, as well as hands-free services to keep your eyes on the road.

The EcoTec3 engine lineup for GM took the Vortec engine and gave it more efficiency and performance. That includes adding active fuel management with cylinder deactivation, direct fuel Injection and variable valve timing to up power and increase fuel economy. The Yukon has the 5.3liter V8 version of the new EcoTec3 engine lineup, good for 355 horsepower and 383 pounds-feet of torque. 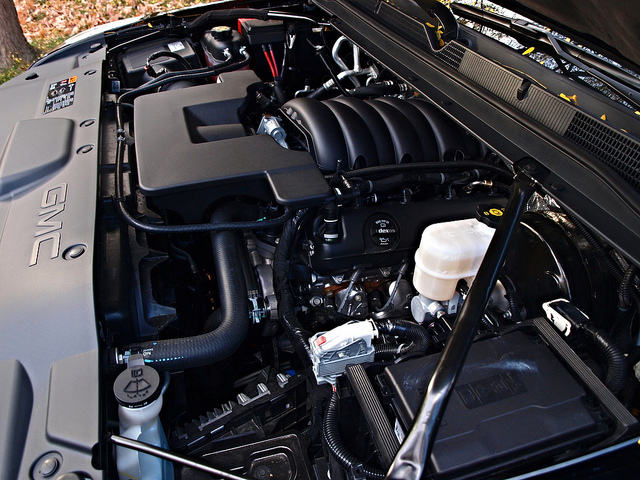 A six speed automatic transfers power from the V8 to all four wheels. The four-wheel drive system uses a two-speed active transfer case with an automatic setting. The latter senses the need to switch between the rear wheels to all four when conditions present themselves. Power is smooth, but on the light side. A  bit of accelerator will help, but it does not appear to be quick in lane changes, ramp entrances and other needs for performance.

However, the Yukon rides very smooth and absorbent. It makes even the worse surfaces look easy to roll through. This is no exaggeration, as the big SUVs went through a transformation on their suspension set-up, including coil-over shocks up front. Handling is on the soft side, with some roll and lean in the corners. Yet, no situation came up where the Yukon felt out of control – it is a very good chassis and suspension bolted underneath this big SUV. 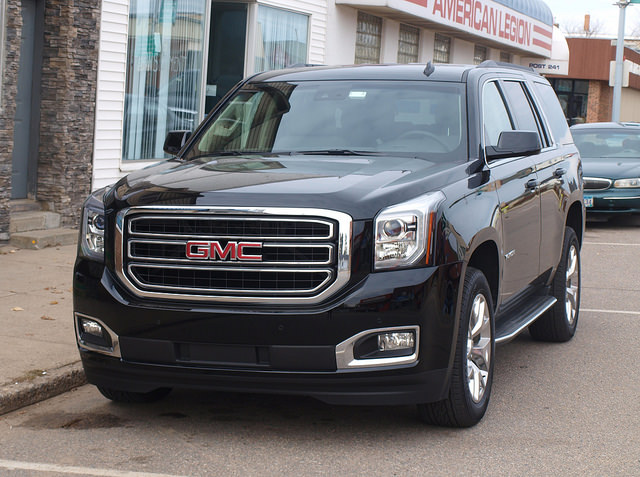 A huge steering wheel adds a bit more work to turn the Yukon. The system is decent with enough effort to make even sharp maneuvers. However, the turning radius is quite large, but expected in this vehicle. Brakes are also decent with enough stopping power in both normal and panic situations. However, expect a longer stopping distance when engaging the brakes – some pre-braking may be required.

The GMC Yukon advertises that it will get 18MPG on average with the EcoTec3 V8, we got better than that. The fuel consumption average under our care came to 18.7MPG with a high of 23.9MPG on the highway.

The Yukon lineup starts at $46,990 with a two-wheel drive SLE model. Out SLT tester had four wheel drive and a whole host of options, bringing the sticker price to $64,520. If you want more, there is the Yukon Denali – starting at $63,770. 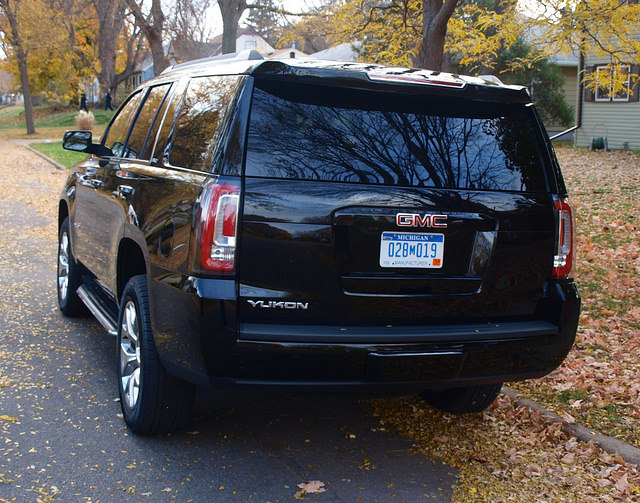 – Big SUVs are not as commonplace as they once were. They do serve a purpose, however. One must find a justification in buying a Yukon. It is a big truck that defies its own size. Yet, it has the space for families to haul around for many occasions – such as sports activities and family vacations.

– Yet, the GMC Yukon serves a purpose for families who can afford one and justify its use. It combines everything a family wants in a transporter to take them through the most important times in their lives. That is, of course, if you live a life that is large and in charge.