How do you attempt to sell a luxury brand for the umpteenth time?

Lincoln has been exploring ways to sell each new product lately by changing up the overall theme a bit. Maybe a bit more, but it makes you wonder what they are going for every time they adjust their marketing campaign.

Somehow, they stumbled upon a hit. Lincoln wound up getting a celebrity to endorse their latest models – namely, the MKC. This is no ordinary celebrity. He won the Academy Award for Best Performance by an Actor in a Leading Role in 2014 for Dallas Buyer’s Club. His body of work was always seen as “unconventional,” just like his life. 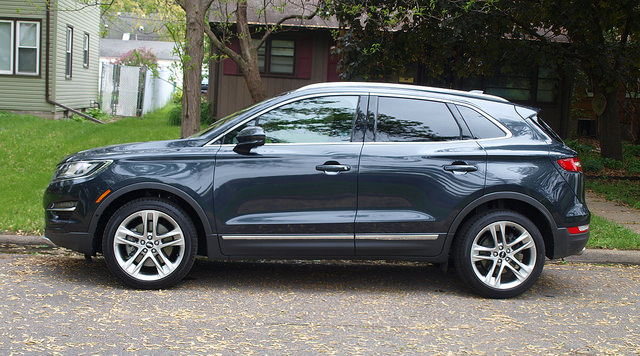 When Matthew McConaughey speaks in his slow Central Texas drawl about his ownership experience before the brand paid him to do these spots, it appears that Lincoln had found their man.

These spots were a hit! So much, they became parodied by Ellen DeGeneres and “Saturday Night Live” (with Jim Carey as McConaughey). In turn, Lincoln supported the actor’s charities and endeavors.

On top of that, Lincoln sales are climbing. Customer reaction to their latest product – the MKC premium compact crossover – has been positive. The MKC alone began to turn Lincoln sales upward.

Can one Oscar-winning actor make the difference for one car? Perhaps, in making the difference to turn around an entire brand? After a few requests, an MKC came to my doorstep to see whether I can meet a 1,800-pound bull on a road in Minnesota head on. Sadly, there were none to be found. However, I did get to drive it – and never got to parody any of McConaughey’s commercials… 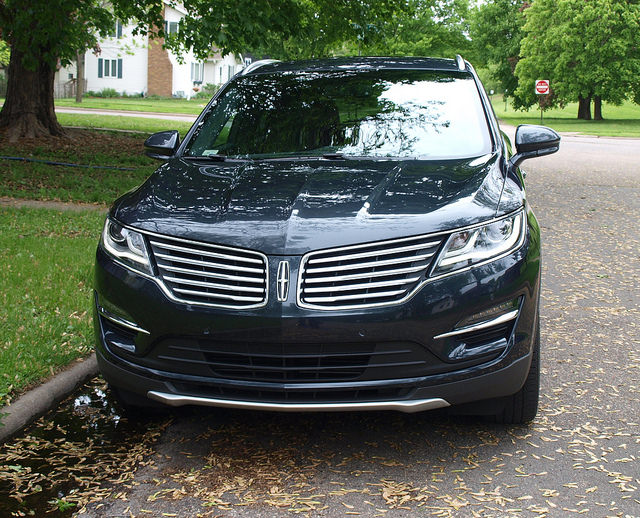 McConaughey’s choice of Lincoln greets you with the Split-Wing grille and the star badge. That is the only common trait you will find among Lincolns today. It becomes a combination of presence within a smaller size. Front doors are rather big and open wide. The rear doors are a bit smaller, but they could be open to near 90-degree access. The tailgate is wide and large – opening to accommodate tall folks loading a day’s worth of shopping inside. 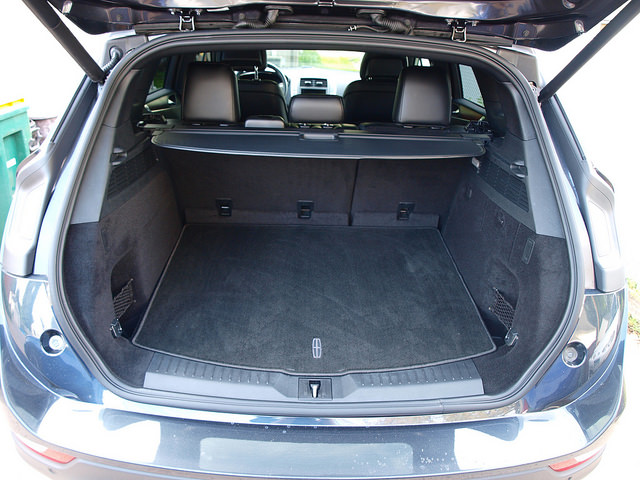 The MKC is quite handsome. Lincoln did a very good job distinguishing it from is lesser platform mate – the Ford Escape. The Global C platform is a solid one for Ford. However, the MKC is completely transformed into a luxury compact crossover with enough Lincoln-ness to be inviting to drive.

Once inside, the theme of Lincoln-ness continues. Some have criticized some of the details that were introduced in the MKZ – push-button transmission, open console and center stack – but they seem to work in the MKC. However, the transmission buttons are closer in the MKC to reach than in the MKZ, especially for a tall person. The instrument panel has a Lincoln feel to it, though Escape owners might nitpick to see which elements are theirs instead of Lincoln’s. In all, there is a decidedly Lincoln touch to the MKC’s cabin. 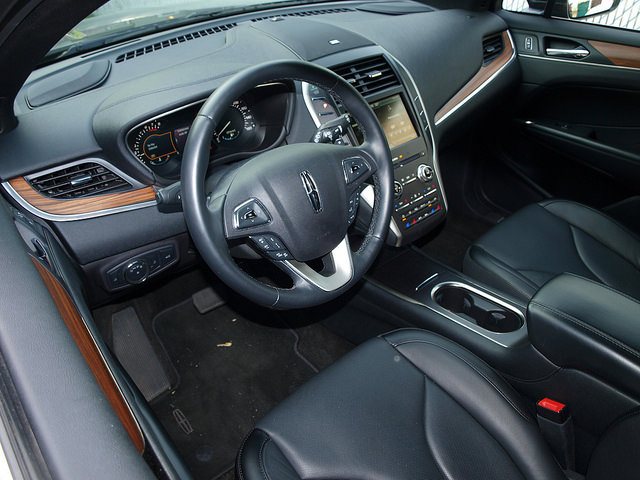 The seats are actually more comfortable than in the lesser car – and that is a good thing. To maintain a level of Lincoln-ness, there has to a luxury touch. Though a sportier touch was what I did not expect from the MKC. They are indeed comfortable, but certainly lock you in with plenty of bolstering in the cushion. Rear seat passengers have plenty of space and comfort to relax. Cargo space is quite huge – 25.2 cubic feet with the rear set up. That should be enough for a weekend in Austin, or up in the Hill Country…or, somewhere where you might or might not encounter an Osiris bull in the middle of the road. 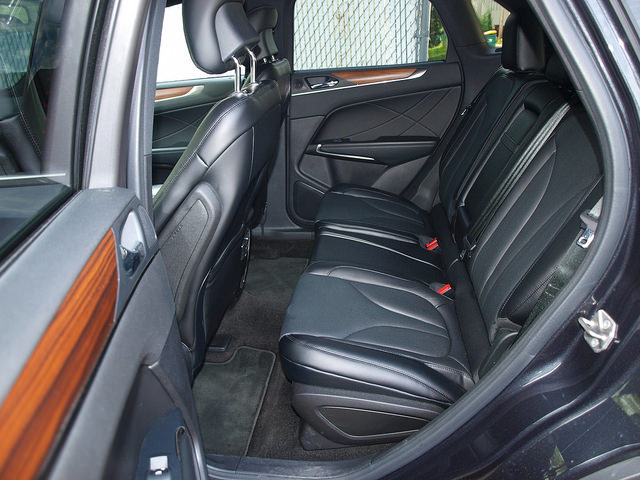 MyLincoln Touch and SYNC anchor the infotainment system that is filtered through 14 speakers inside the cabin. It is powered by a 700-watt amplifier making the THX II Certified Audio System a great companion for the road. Bluetooth connectivity and app usage is quite good – even when using Pandora. It might not be as exacting a playback as if Matthew himself was playing his bongo drums, but it is simply good enough. 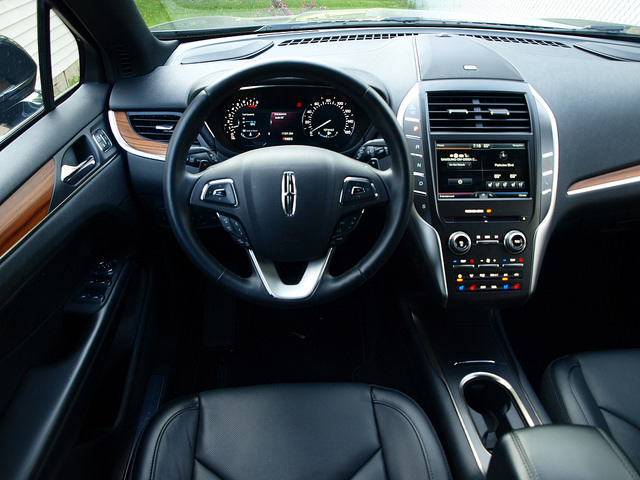 The MKC went strictly for EcoBoost power. Though the 2.0liter version is standard, this tester had the more powerful 2.3liter engine. A single turbocharger adds boost for a total output of 285 horsepower with 305 pound-feet of torque. There is minimal turbo lag and power is balanced throughout the power band. A six-speed automatic facilitates power down to all four wheels with a solid all-wheel drive system. Overall performance is quite good considering that there is almost 4,000 pounds of compact luxury crossover to run. 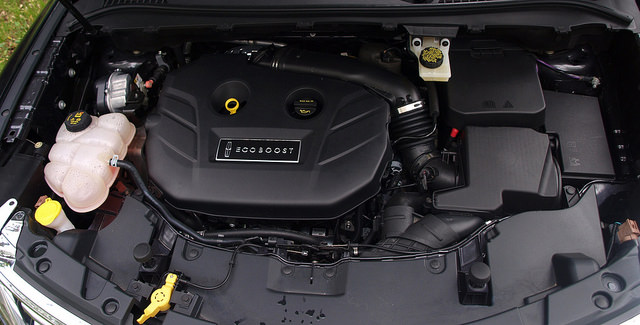 To give credit where it is due, the MKC actually rides very nicely. It is solid, though compliant for anyone riding on board to not feel as they are in a small crossover. It does ride quite large for its size. That is a good thing! Going into a turn, there is some lean and roll felt, but not enough to cause concern. Push the MKC though the curves and there is some definite roll to the point where it will show its limits.

Turning the MKC offers a short radius – enough to avoid a bull and take the long way around. The steering effort seems a bit disconnected, yet it does offer some feel to the road. On-center feel is quite good. Braking is fine, though there is a soft feel when stopping. Normal and panic stops are also fine. 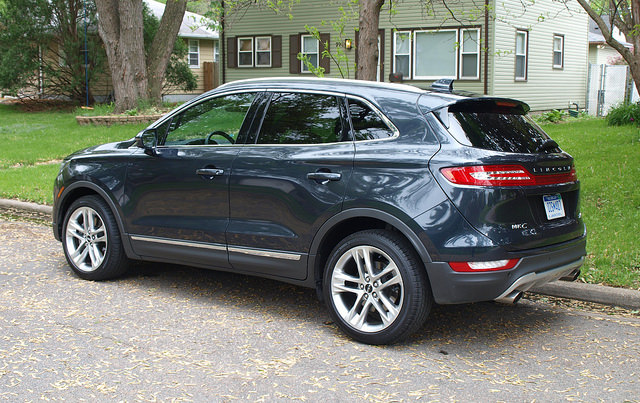 One complaint about EcoBoost engines have been fuel economy. The promise of turbocharging to increase efficiency would always side on performance with mixed returns. However, the 22.4MPG average attained in the MKC may seem low, but it almost seems right in this class.

Starting at $33,100, the MKC is quite the value in its class – that is if you only get the 2.0liter EcoBoost with front-wheel drive in the Premiere trim. This Reserve tester with the 2.3liter EcoBoost and a host of optional equipment ran the sticker up to $49,265. However, the MKC is also available in four Black Label trims, offering a level of luxury that is defined by personality and taste. Those models start at $46,205 and can scale up above $54,000 when fully equipped. 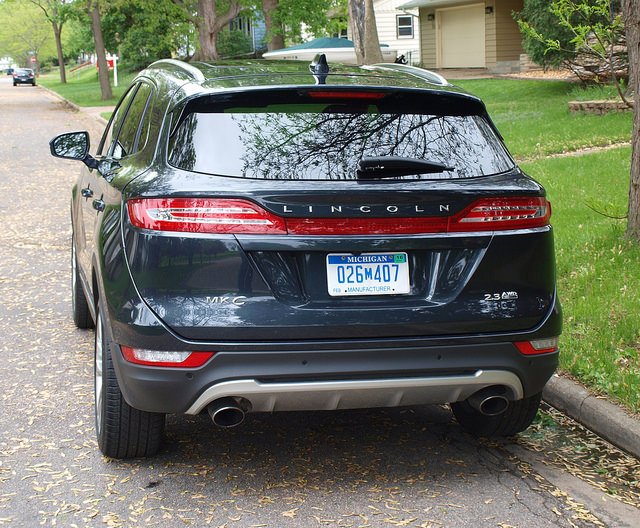 – While there are solid choices in this class, the MKC offers a good argument against its competitors. Even with brand signatures outside, choosing an MKC with the larger EcoBoost engine offers plenty of advantages over equivalent models. One is simple – it is easy to spot in a parking lot full of Mercedes-Benzes, BMWs and Audis.

– In all, the Lincoln MKC is actually a nice crossover. One thing to watch for is pricing. To get all of the luxuries, you would have to pay prices equal to a “moderately equipped” BMW X3 or Audi Q5. There are better value propositions in this class.

– Lesson learned: never doubt the power of Matthew McConaughey in selling your product – even if it means being parodied by everyone. In that power is the ability to offer a solid crossover for luxury consumers that will satisfy the doubters. One could consider the Lincoln MKC for those merits alone.