Next year will mark Infiniti’s quarter-century of existence.

Nissan’s luxury brand made some inroads in the premium car game. Some might say it had not done enough in terms of sales and memorable vehicles during its 25 years. Let me prove you wrong. If you noticed that on two of the most competitive cars on the Formula 1 circuit that a certain logo and corporate color appears on them. 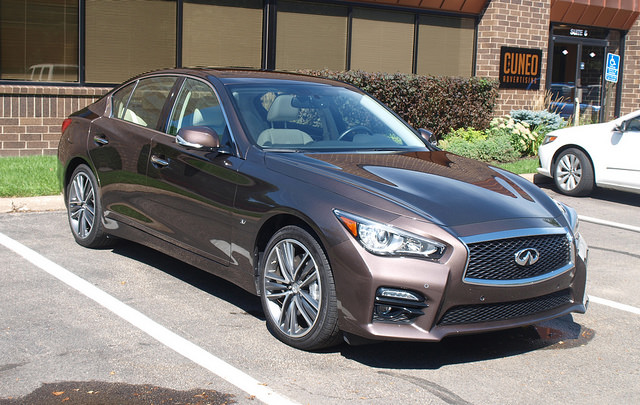 In 1990, we were not entirely prepared for the Q45 flagship. It provoked debate while it revved up its powerful V8 engine. Years later, it serves as a reminder of what Infiniti was intending to do in this marketplace – to provoke consumers.

This is why the new Q50 sports sedan is an important vehicle for Infiniti. Though it was supposed to replace the G sedan (to be rechristened the Q40 for 2015), the new car was positioned to compete hard with the BMW 3-Series, Audi A4, Lexus IS and Cadillac ATS. However, this Infiniti has a twist – sounds like the original Q45 in a sense.

You see, the Q50 might be the most original Infiniti in a very long time.

It starts with an organic design up front with curves and scallops forming a distinctive nose. A graphite mesh grille is wrapped with a chrome frame and two evil-looking headlamp units. The front fenders and hood seem long, but it denotes a front-engine/rear-drive design leading to a sweet sedan roof, broad shoulders and side all the way to a svelte rear end. Again, you get curves and scalloped shapes at every turn of the Q50.

The result is a handsome sports sedan that exudes an essence of utmost luxury. While its competition concentrates on its sportiness, Infiniti knows it has to stand out amongst the crowd. It accomplishes this excellently, with some sporty touches on the Q50S to keep it in the game.

In a highly competitive segment, you have to stand out inside. That is easy for Infiniti, who had been known for sumptuous cabins and graceful touches. The Q50 takes these ideas and form them into a balanced sports sedan interior. It starts with sports seats up front in the S model. Bolsters are thick, supportive and power adjustable.There are enough adjustments to keep you locked in and comfortable on any drive. However, tall drivers may find a sports car-like seating arrangement behind the wheel, especially when equipped with a moonroof. 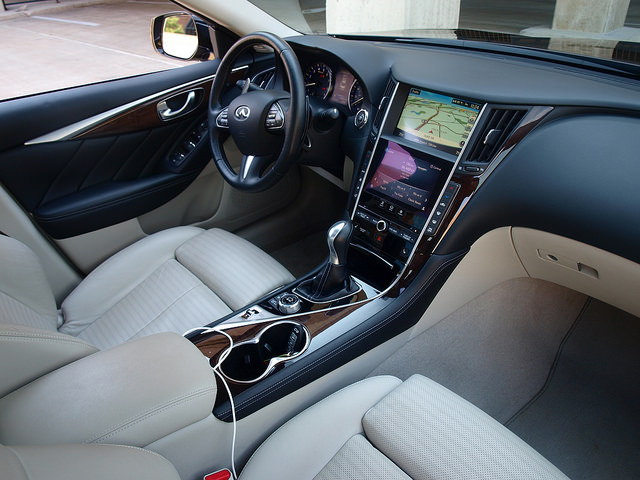 Rear seat room is fine for average-sized adults. However, the driveshaft tunnel may prevent a third person to get comfortable in the back. Cargo space is fine with 13.5 cubic feet of space. In all, the Q50 works best as a touring sedan for two with the rear seat used for certain occasions.

Infiniti loves to give you the best driving environment. Instrumentation has the brand’s signature purple trim with informative gauges and a good center TFT screen between the dials. The center screen offers vehicle, trip and fuel economy information. Switches for the screen are on the steering wheel. Perhaps the most improved piece of any Infiniti is the Q50’s steering wheel, now replete with many improved touch points.

On the center stack is a pair of touch screens positioned on top of each other – called Infiniti InTouch. Between these screens, you could customize to display climate, audio and navigation systems for quick readouts. The customization part is called Infiniti Intuition, which is also programmed to the car’s Intelligent Key. Driving these systems is an Intel processor that makes it all seamless and smart. Sound is provided by a 14-speaker Bose Studio-on-Wheels system emitting a clean, balanced sound throughout the cabin.

The Q50 offers two V6s – one with an electric motor attached. Our Q50S model came with the VQ37 engine, a 3.7liter V6 with 328 horsepower. It is a ball of power that quietly does the job with ease and intention. In other words, this is a good engine that is balanced, alike a solid athlete. 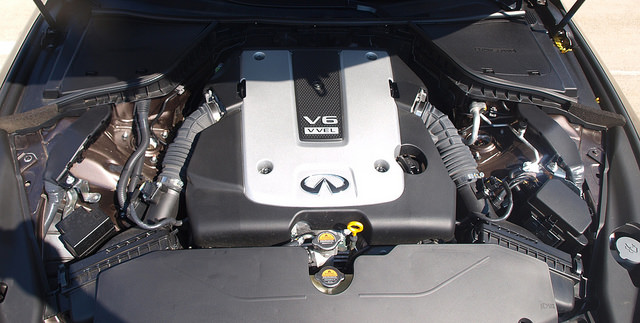 A 7-speed automatic makes this engine sing with quiet, unobtrusive shifts. Power is sent to all wheels through a very smart drive system that facilitates power where it is needed. When it is not, it simply becomes a rear-wheel drive sedan.

Depending on which drive mode you choose, the Q50 actually drives very well. There is a bit of roll or lean through the corners , easily eliminated by switching the drive mode to Sport. It is very poised everywhere else. Not to mention, the Q50 has a very nice ride that tries its best to absorb rougher roads. There is some noise through the cabin – a hum. It is not a bad thing…perhaps very soothing for passengers. The standard Dunlop tires provide a smooth and quiet ride in every mode.

You will notice some changes in Sport mode. While the ride is stiffened up, the Q50 remains quiet. However, steering action is changed. In Normal, you have a lot of flexibility at the wheel with a wider steering lock. Put the Q50 into Sport, the wheel not only gets a heavier weight, but your turn lock is restricted. Tight maneuvers are probably best done in Normal. However, the steering system is excellent with good reaction to the wheel in all modes. 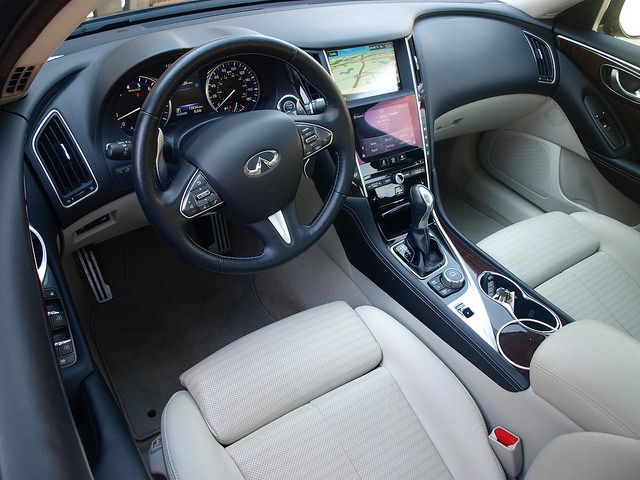 Braking is very good, though on the soft side at the pedal. Yet, you will find the Q50 stopping very well in both normal and panic situations.

Fuel economy is a huge consideration in the premium sports sedan segment. This Q50S turned in an average of 23.9MPG – exceptional for any car in its class.

– If you are looking at the premium sports sedan market, it is worth considering between its engine, design, driving dynamics that is tailored for many drivers and that sumptuous cabin.

– However, it is a different entry for those of us who rather want something that stands out than conform to anyone else’s standards. In all, it is truly a lovely car. 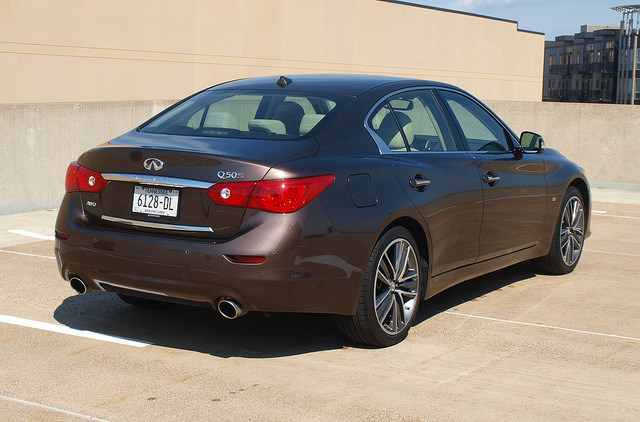