Why 1992? Something happened that has changed the face of sports utility vehicles forever. The segment was growing thanks to several ground-breaking vehicles that made it easier for a family to drive one. Until the mid-1980s, there were a few choices. The Jeep Cherokee was developed into a unit-body wagon that was as capable as its larger predecessor. That made it possible for the market to open up enveloping the likes of Range Rover, Chevrolet, GMC, Ford, Isuzu, Nissan, Toyota and the rest.

By 1990, Ford answered Jeep’s challenge with the original Explorer. Taking what they learned from the Bronco and Bronco II, the Explorer was family friendly with a larger cabin with proven underpinings and a more compliant suspension. The Explorer changed the SUV game enough to provoke everyone back to the drawing board.

Jeep was already at work on a larger SUV that was family friendly, capable and smooth riding. When it finalized the design, Chrysler was ready to show off to the world. That happened in January of 1992 at the North American International Auto Show in Detroit. Chrysler needed to do something to bring awareness to this new Jeep. It needed to make a huge splash.

Chrysler figured they would drive it through a pane of glass. So, they did. That got your attention, didn’t it?

Thus, the 1993 Jeep Grand Cherokee was brought onto the world – crashing through a pane of glass. The world responded by buying a lot of them.

Twenty-two years later, people are still buying a lot of Jeep Grand Cherokees. They are the standard of the class – two-row, medium-sized premium SUVs. Though they are priced in the mainstream, some consider the Grand Cherokee a premium product. A signal that Jeep has done something right by targeting their most refined SUV at several demographic targets. 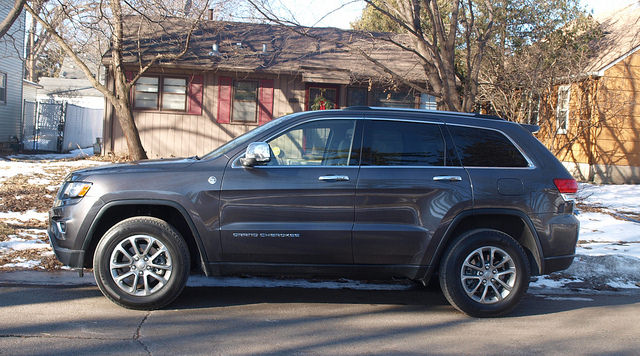 This Grand Cherokee being reviewed is the latest generation – first introduced in 2010 and revised for 2014. This 2015 Limited tester is perhaps the most popular Grand Cherokee available. And, it came at the right time for one big road test…

For starters, the Grand Cherokee has one thing going for it above all else. There is no question what this vehicle is from the outside. It is a Jeep – a refined one with presence that distinguishes it from all others on the road. The seven-slot grille is framed in an aggressive manner. The updates for 2014 yielded a set of LED surround lights lit both day and night, while the single-beam lamps illuminate the road ahead. Fog lamps also help at the pitch of the night. 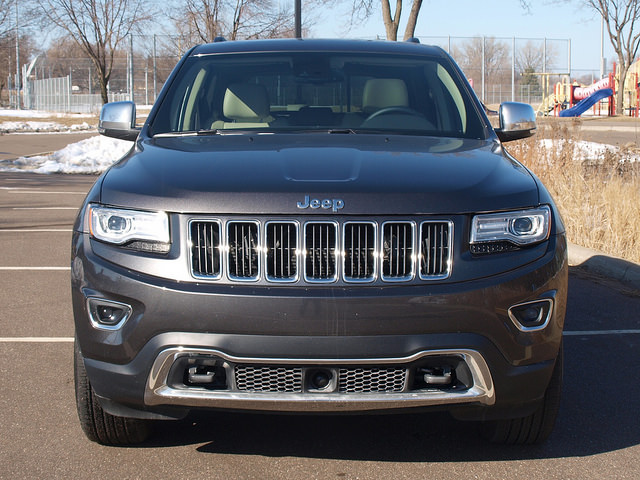 Still, if you run your fingers along the body and examine closely the details, you will find that there’s a complete difference from Jeeps in the past. However, you will find a different take on rear-end design with the tail lamps going across the rear instead of up-and-down. The Grand Cherokee is pretty substantial in size and stature.

Where the Jeep’s emphasis in quality is completely evident is inside. The interior materials are of a higher quality, including the seating. The steering wheel is thick-rimmed and grippy. The gear lever is different and designed for a person to do quick shifts if need be. Better still is the switchable center TFT screen housing the speedometer and key vehicle, trip and fuel economy information. It is designed as a screen inside the dial with everything customized for use. The graphics are among the best in the class.

The 8.4-inch UConnect Touch offered plenty of audio options – including Pandora. The trick to get Pandora and other apps connected is to download the UConnect app for both iPhone and Android. The Bluetooth connection takes care of the rest. That same connection offers quick pairing and usage from your mobile device.

Seating for five adults is available. Front seats offer both hard and soft cushioning, but are plenty big to command the Grand Cherokee. In the course of a round trip from the Twin Cities to Chicago, my body was fine behind the wheel. Rear seat room is fantastic for three adults to sit next to each other. Cargo space is huge – enough to swallow an extended weekend for five or a very long road trip for two. 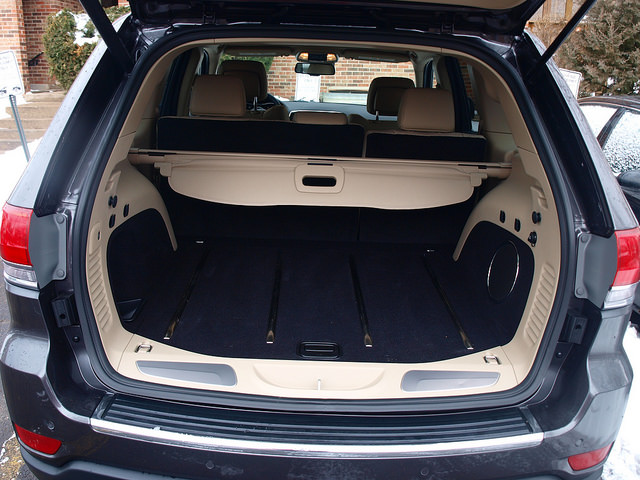 Under the hood is Chrysler’s Pentastar V6. This 3.6litre mill packs 290 horses, but only 260 pounds-feet of torque. This engine is truly coming on to its own in the Grand Cherokee with the power to muscle this 4,875-pound SUV. One thing to note about this motor is that you can fuel it up with either regular unleaded gasoline or E85 Ethanol. 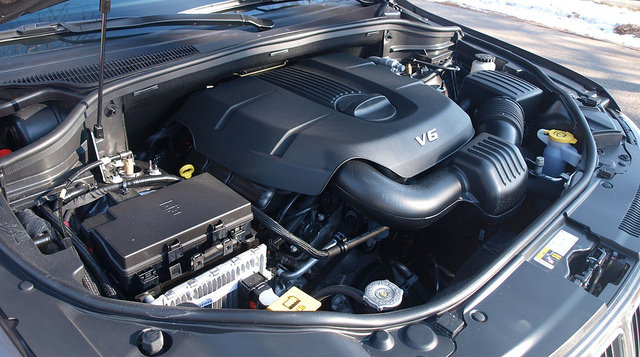 Connected to this V6 is the TorqueFlite eight-speed automatic transmission developed by ZF. It is a quick shifting gearbox that makes the most out of the Pentastar V6 – and any other engine it is attached to. The power from the V6 and the TorqueFlite is sent to all four wheels by the Quadra-Trac system, controlled by the Selec-Terrain System. It is one of the best four-wheel drive systems available on the market making things easier by selecting a traction situation – Snow, for example – and having the system take the guess work out of the equation to provide proper traction down to the surface. It is one of many reasons why one should buy a Jeep.

The ride is supple and elegant, and that works in the city and on long drives. In this case, the Grand Cherokee did both – in Chicago and Madison and long stretches of Interstate Highways 90 and 94. The added Quadra-Lift air suspension has automatic levelling, bringing the Grand Cherokee down a notch to limit under vehicle airflow on the highway. It also works to raise the Grand Cherokee for optimal ground clearance off-road. Handling is quite good with near flat cornering and limited body roll. You can feel the balance of grip and smooth, quiet ride from the Michelin Latitude tires on the ground.

Though the steering might feel detached on-center, it is actually reactive with very sharp and quick turns. Once in a maneuver, steering response is quite good. Braking response is as sharp. Normal and panic stopping situations yielded a powerful and precise braking system that is aided by a great anti-lock system and active safety features, including Forward Collision Warning with Stop Advanced Brake Assist. The Grand Cherokee is definitely one of the safest SUVs in the marketplace.

In taking a long road trip, one would hope for the best in fuel economy. Fuel consumption is what makes a vehicle worth buying, right? Overall, the V6-powered, four-wheel drive Grand Cherokee averaged 19.8MPG with a low average of 18.3MPG. Considering there is 4,875 pounds of Jeep to drive, those numbers are quite decent – and very realistic. Good news, however – the Limited model is available with the 3.0liter turbocharged V6 EcoDiesel promising up to 28MPG on the highway with four-wheel drive. 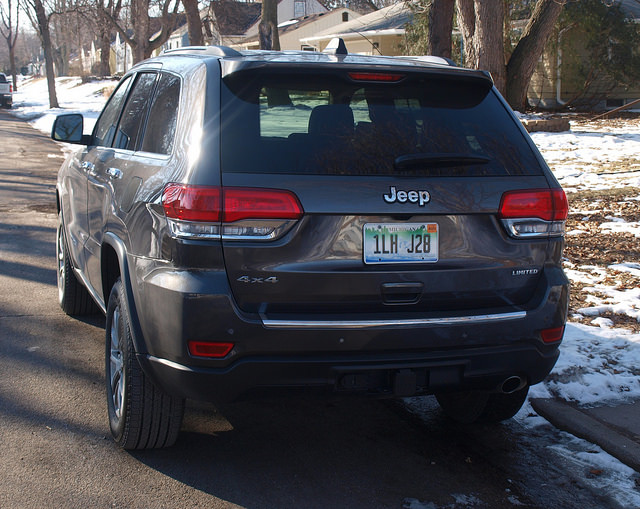 – It is still one of the most sought after SUVs of its kind. It is refined, capable and powerful – in the way it drives, as well as presents itself to the world. The Grand Cherokee’s calling card is being versatile in every situation it is called upon to do. This is how good the Grand Cherokee is now.

– The Grand Cherokee is full of superlatives. However, it offers great balance between its superlatives. The four-wheel drive system alone did a superb job of traction on various surfaces, while it reads the correct traction requirements for even dry surfaces. It is comfortable and accommodating, while keeping everyone’s attention on the road – where it is needed the most.