The full-sized pickup market is not for everybody. But, if you stick around, you might get some credibility.

Case in point: Toyota. Back in 1993, Toyota thought they would attempt to get in on this very domestic of markets. The T100 was a good first attempt, but truck buyers dismissed it for being too small, too light and lacking “real” power. Several years later, Toyota went back to the drawing board and rolled out the Tundra. It was larger and it appeared to be nipping at the heels of Ford, Chevrolet, GMC and Dodge. Still, truck buyers continued to dismiss it for not being as strong or durable as the established brands.

Toyota kept at it. They learned from the big three on how to do a proper rolled steel frame, providing power for greater towing and hauling capacity, creating a cab and bed that worked for everyone who uses a truck. Their homework was turned in – and finally someone noticed. The 2007 Tundra roared in making claims that it was better than the Ford F-150, Chevrolet Silverado 1500, GMC Sierra 1500 and Dodge Ram 1500. The advertising campaign made the Tundra seem like the world-beating full-sized pickup that it aspired to be.

That Tundra was an improvement. Not perfect, but it did play on a level playing field with its domestic competitors. Sales were steady – still are. Even with the competition making huge changes to cab/bed construction, suspension systems, engines, transmission and other details for continual improvement, the Tundra also stepped up with its own innovations to match with the rest of the crowd.

Still, the Tundra is a competitive half-ton pickup truck. Why are truck consumers passing this up? That was the question I ended up asking at the end of my time in a 2015 Toyota Tundra Platinum CrewMax 4X4. From what I see…it’s a good truck. My reasons? Read on…

You cannot fault the Tundra for not having a presence. The Toyota truck has a big snout, enhanced with an even bolder grille area a model year ago. Some nips and trucks were evident, but the basic tenets of the Tundra’s mix of industrial and sleek design remains as its calling card. 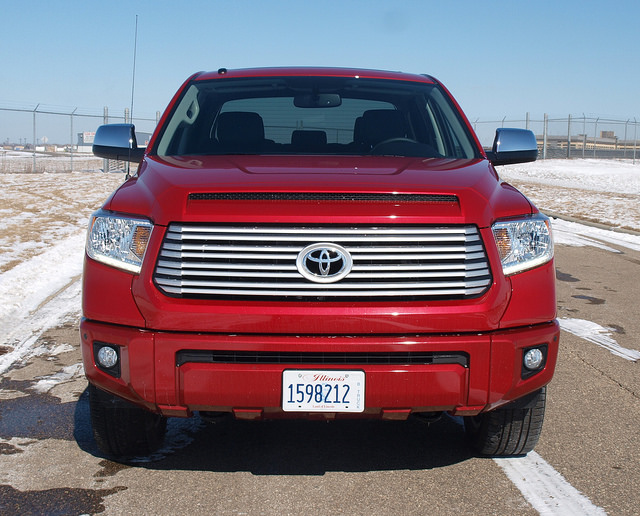 One thing you will notice on the Tundra is the cab – it is humongous! Crew cabs usually take up a lot of a half-ton pickup’s footprint, but no one could fault the Tundra’s CrewMax passenger shell. The doors are about the width of any given coupe or two-door – though taller on the Tundra. Luckily, you have running boards to guide your entry up into the cabin.

The Platinum edition adds a few embellishments without going over the top. Body paint grille surrounds and bumpers distinguish this luxury trim – one among five available on the Tundra. A set of 20-inch wheels and decent-sized chrome motif badges denote the Platinum as more a sport-luxury truck than simply a luxury trim. Toyota did a very good job distinguishing each trim level with a balance of subtlety and distinctiveness. 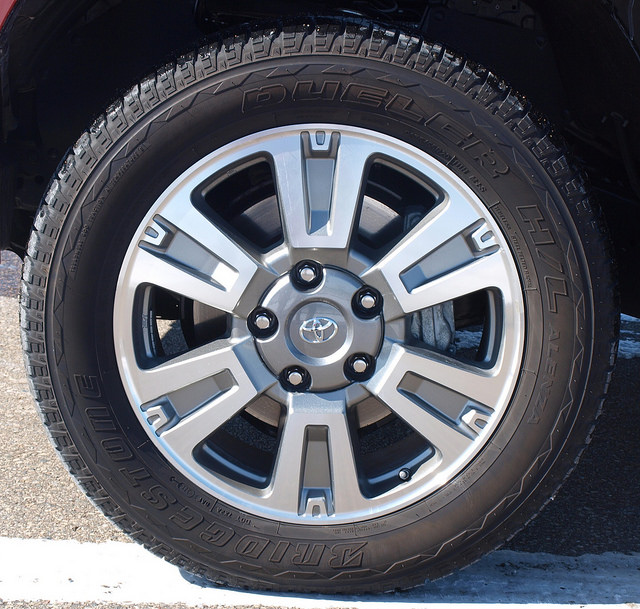 Once you climb inside, you would actually be surprised. The Platinum’s black leather trim offers a few chrome badges and a cross-stitched trim to go along with perforated seating surfaces. The seats themselves are huge and throne-like. They are supportive up front, separated by a wide, useful console and a gated shifter. Rear seat passengers in the Crew Max cabin will experience legroom beyond anything in its class. 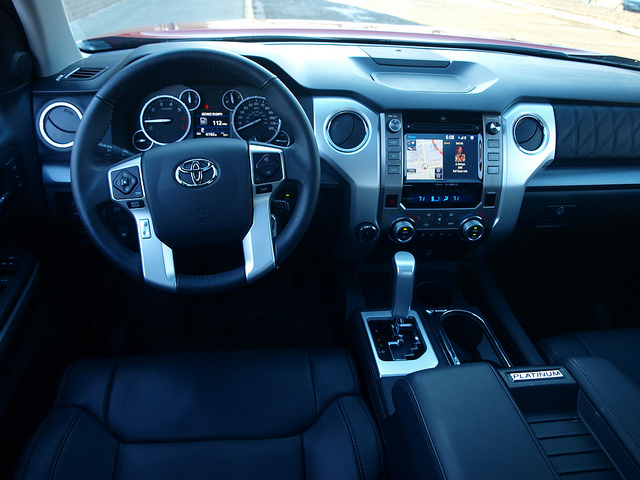 For the 2014 update, Toyota addressed complaints about the ergonomics of the Tundra – and it shows today. The instrument panel is better with more access to key controls on the center stack and a bigger infotainment screen. Instrumentation is comprehensive, but the switchable screen in the middle offers nominal information compared to its rivals. What you get from that screen is more straightforward information, however.

A truck needs serious power to haul – everything. Toyota drops its 5.7liter iForce V8 as the Platinum’s only engine choice. There are 381 horsepower and 401 pound-feet of torque at ready on a right foot’s notice. It is also a FlexFuel truck available to be fueled up with either regular gas or E85 Ethanol. With the 5.7liter engine, the Tundra’s towing capacity jumps to 10,000 pounds, along with a payload of 1,505 pounds. It might even tow a space vehicle, if you ask it to.

A six-speed automatic is attached to the big V8, which gives it smooth shifts and nice throttle response to go along with its power numbers. This Platinum came with the 4WDemand part-time system that has automatic hubs and a knob to select your traction needs. This system offers great grip on slick roads, but it does restrict sharp steering maneuvers. If you look back at Toyota’s history of four-wheel-drive systems, you will know this is among the best in the business.

Pickups have certainly improved when it comes to driving dynamics. The Tundra offers a smooth ride overall, though road imperfections and indifferent surfaces could not be completely controlled by its suspension setup. Take a curve hard and it will roll into it. Take it easy and the Tundra will reward you. The Tundra will offer you more brawn than luxury in the Platinum in its ride-handling mix.

The steering is a bit loose, but responsive when it needs to be. On-center offers some play even at high speeds and you get to rudder a big, wood-and-leather trimmed wheel if it calls for that. Brakes are good showing strong competency in both normal and panic stops.

Pickup trucks do drink plenty of gas. The Tundra with the 5.7liter V8 averaged 13.4MPG. One concern with fuel consumption is its fuel tank – only 26.4 gallons. It’s competition offer up larger tanks for extended ranges, which the Tundra does not offer an option for such.

The Tundra lineup begins with the SR work truck – a two-wheel drive double cab with a standard bed, the 4.6liter V8 and – at $28,510. You do get a selection of trim levels – SR5, Limited, Platinum and the 1794 – along with cab types, bed lengths and powertrain options. This Platinum CrewMax 4X4 tester came with a sticker price of $50,250. 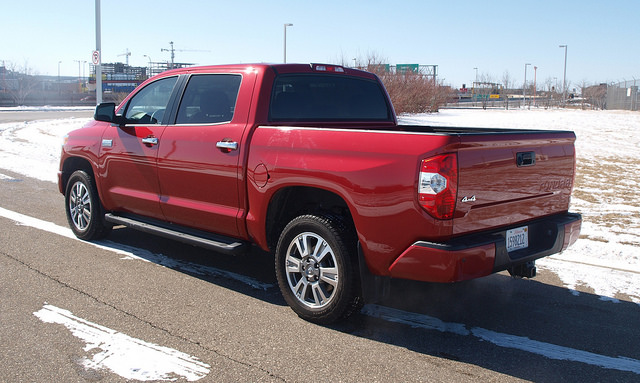 – It’s a truck! A Toyota truck that honors its heritage and pushes the envelope in terms of what they see as a viable full-sized half-ton pickup. It does so by sticking to the basics – something the competition may have abandoned for technology, fuel savings, weight and advanced engineering.

– It is the basics, along with a comfortable sports luxury interior, a cool exterior and a huge cab that should be considered in the Tundra. If you remember the days when a truck had a hot motor, spring leaf suspensions, a great transfer case for four-wheel drive and commanded every road it drove on – the Tundra is a throwback laden with some modern engineering and great comfort to boot.

– One point has been forgotten in this review: The Tundra is made in the good ol’ U.S. of A. In San Antonio, Texas – to be exact! Texans love their trucks and this is a truck that loves Texas…and Minnesota, Wisconsin, California, Virginia…anywhere, really. Look at the first digit of a VIN on the pickup you are considering buying. I’m certain it will start with a 1, 4 or 5 – which means you are supporting American labor building a quintessential American vehicle. OK, so I’m flying the flag a bit too high, but by looking at the Tundra and dismissing it by the badge means you are ignoring most of its story.

– In my humble opinion, I love this truck. Not because of the reasons stated in the paragraphs prior. It is a throwback to a truck from about 20-40 years ago that was not concerned about ride, fuel saving technology, infotainment systems and air suspensions. That iForce V8 ran like someone dropped a modified engine into the bay and gave it a mean tune. All of this made this city slicker pretty darn happy.

– Everyone makes a great truck. But, the Toyota Tundra has a lot of personality to boot. That counts for everything in my book.

Photos by by Randy Stern