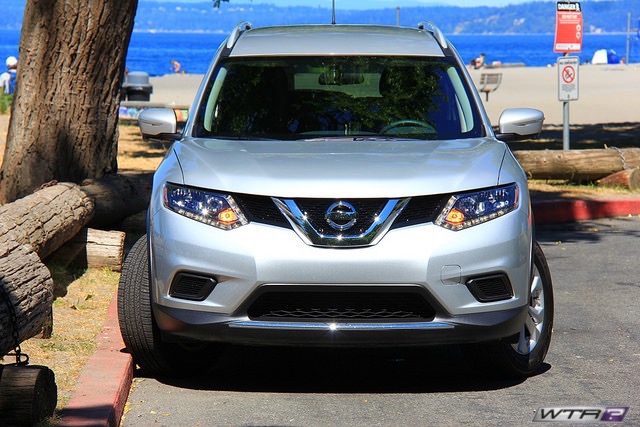 Nissan’s Rogue Crossover SUV moves into its refined third year of production for this second generation. This is a vehicle for those who demand comfort, efficiency, reliability and safety in a well-proportioned economically priced Sport Utility Vehicle. At an MSRP of $23,140, the five or optional seven-passenger, four-door Rogue will be available to order in three model lines; S, SL and SV, each with a choice of front-wheel or all-wheel drive.

This year Rogue’s major updates are in optional equipment working off of a solid batch of standards already in place. Ready on NissanUSA.com to build, the 2016 SV midrange and SL toprange models have newly available NissanConnect and Siri Eyes Free infotainment services on top of a collection of life-saving electronic active safety features using radars and cameras which are also available on Nissan’s new Maxima.

After driving a couple of miles on the beaten up streets of Seattle, I could feel the engineering and design behind the Rogue. Its drivetrain and chassis cruise ultra smoothly coupled with a tightly sealed cabin achieving low wind noise plus anti-exhaustion Zero-Gravity front seats designed with NASA in mind are just some of the reasons why I chose this ride.

The real celebrity in this Nissan is its chassis, suspension and active electronic driving systems bringing a harmonic supple ride to this vehicle category. It’s high-strength steel unibody has an unexpected tightness, giving the engineers a solid platform for tuning the suspension precisely to a unique softness. It felt unified and composed over bumps, even with its soft-edge and light steering character through the three-spoke steering wheel. There was some creaking of the chassis over driveways, however it soaked up the bumps with confidence. A large pothole in the road felt minute, with little to no sound through the suspension into the cabin which for a midsize SUV I thought was a nice surprise. 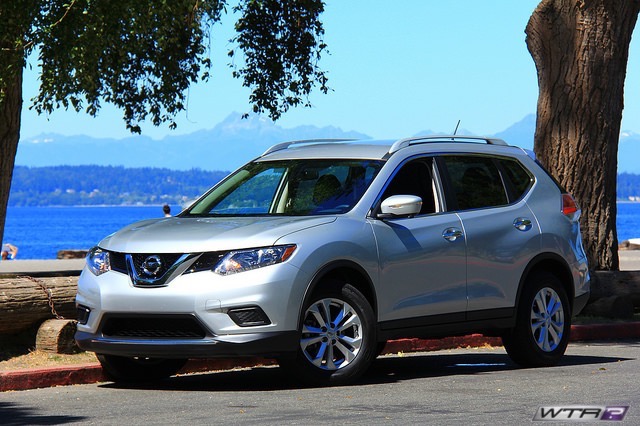 The four-corner independent suspension system is built with a strut-type up front and a multi-link type in the rear just like a passenger car. Nissan’s brilliance comes into play with their intelligently designed standard electronic driving systems such as Active Ride Control and Active Trace Control helping the suspension gracefully take bumps. When hitting a bump, the Rogue will electronically adjust the brakes and engine speed to counter and settle out the chassis and suspension. Pushing through a corner the Rogue’s Trace Control will blip the brakes using the ABS and Stability Control without notifying you and helping you pull out of a corner in bad weather or too fast. Every tire has a limit so don’t leave your destiny to a computer. 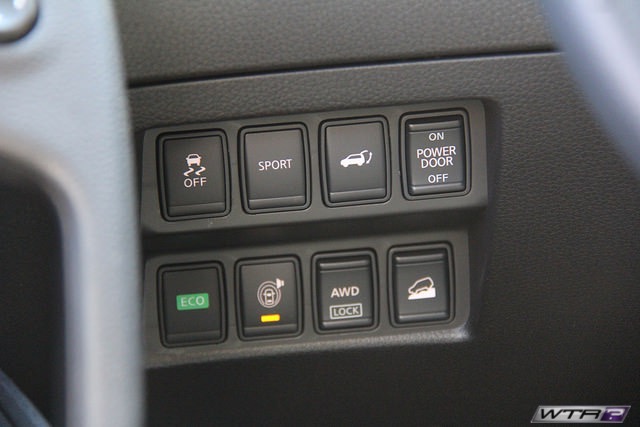 Power is provided to all three models by a front-mounted naturally aspirated 2.5-liter four-cylinder gasoline engine turning out 170 HP and 175 lb-ft of torque with ECO and Sport Modes. The all-aluminum 2.5-liter engine is bolted to Nissan’s in-house designed and built Xtronic Continuously Variable Transmission delivering power to the front-wheels or the optional intuitive all-wheel drive system. Our all-wheel drive model was fun to play with from stoplight to stoplight using the CVT with the Active Engine Braking feature which didn’t have as much resistance as I am used to as a manual transmission driver but it was interesting to try to drive with only the gas pedal letting the CVT walk me down in speed after I released the gas pedal. 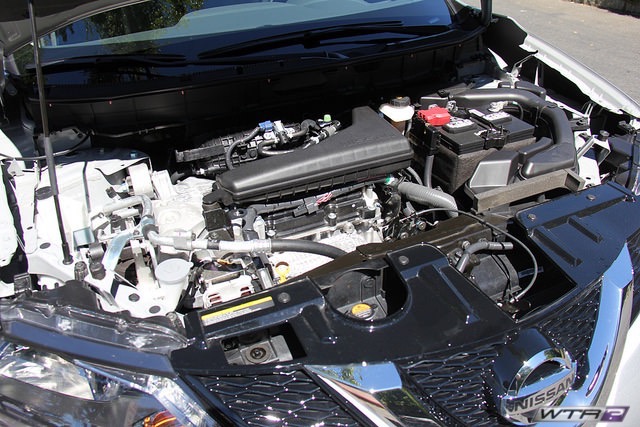 The Eco Mode was noticeable with less power delivery and more economy. The Sport Mode was almost undetectable. I felt it sat me in a CVT ratio longer winding up the engine a little more but not much “sportier feel” or take-off speed. For all front-drive models the MPG is 26/33 and with a 14.8 gallon gas tank is said to travel up to 478.5 miles on the highway but I imagine you can grab more miles using a lighter foot and Eco Mode.

Nissan gets great scores from industry’s safety institutes. Our NHTSA gives the Rogue four out of five stars for its grand score only being held back from five stars for its rollover test. However IIHS gives top honors to Nissan’s midsize SUV with its “Top Safety Pick” award and G for Good ratings all through their tests. The robustly built chassis, advanced airbag system and standard safety electronics put the Rogue in the top percentile of its vehicle category for safety. 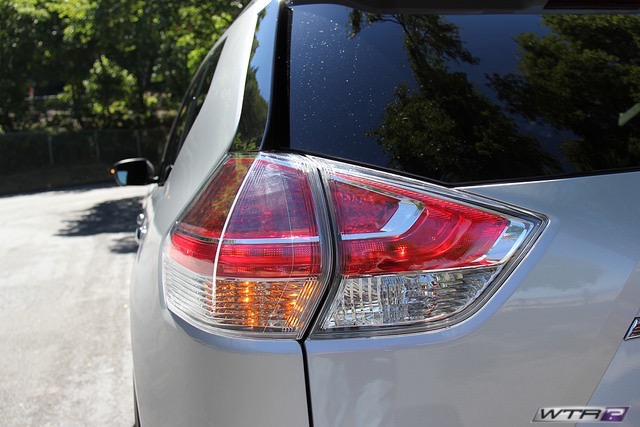 Along with crash safety tech, preventive safety is assisted by standard features like vehicle stability control, traction control, ABS with electronic distribution and assist, Active Trace Control and Active Ride Control. Optional safety features are only available on the SV and SL models adding cameras and a radar which include Blind Spot Detection, Forward Collision Warning, Lane Departure Warning, Moving Object Detection, Forward Emergency Braking along with an Around View Monitor with 360 degrees of cameras around the car. On the AWD models safety is more enhanced with Hill Start Assist and Hill Descent Control for light off-road capability.

My AWD drive test Rogue was assembled with standard halogen lighting with LED daytime running lights that I thought made it difficult to see the road clearly at night. The low power halogen technology and small reflectors are not the best for sight or safety however Nissan does have LED low-beams as optional equipment that I would recommend getting.

The cabin of the Rogue has a rewarding feel as you step up into Zero-Gravity front seats. Soft to touch plastics and cloth is very inviting and warm. The vehicle was a little taller than I, so it was a bit of a climb up. When in the seat it was a snug yet roomy cockpit. My SV AWD test vehicle was built with cloth seating which is standard with heated seats, power everything from seats to windows.

I was privileged to get a Nissan with the optional seven-inch touchscreen infotainment system instead of the standard five-inch touchscreen. It excelled in all fields from Bluetooth connectivity, touch sensitivity and assisting me in directions before each turn. New for this year Nissan adds optional NissanConnect services with Mobile Apps, SiriusXM along with their well established navigation system with a fun birds-eye view setting. Also newly optional is their Siri Eyes Free feature which connects with your Apple device making it simple to make calls, send texts and play music. 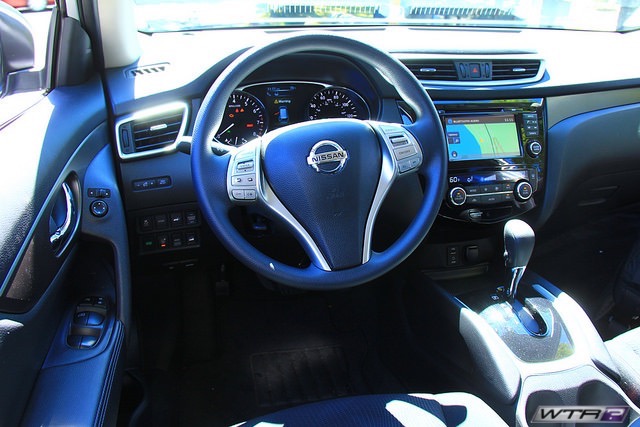 The Rogue is superior in its class against competition like the Honda CR-V, Mitsubishi Outlander and Subaru Forester for holding seven-passengers. Its optional third-row luxury doesn’t just stop there the Rogue comes with a second-row that retracts and reclines providing more room for passengers and cargo. To be exact the Rogue offers 70 cubic feet of cargo with all the seats lowered. With all seats in place Nissan has a unique Divide-N-Hide rear cargo trunk feature for security and locking in cargo for on-road stability. 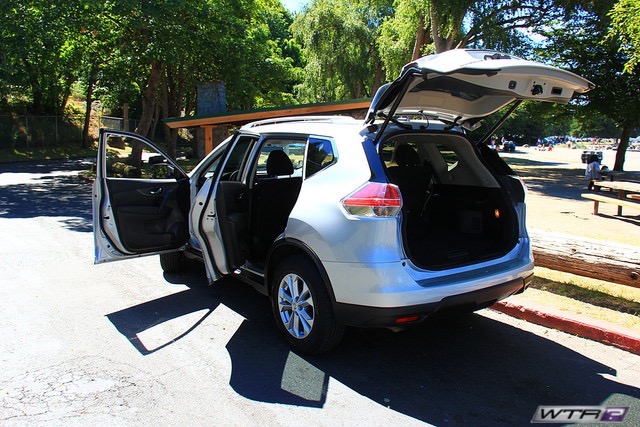