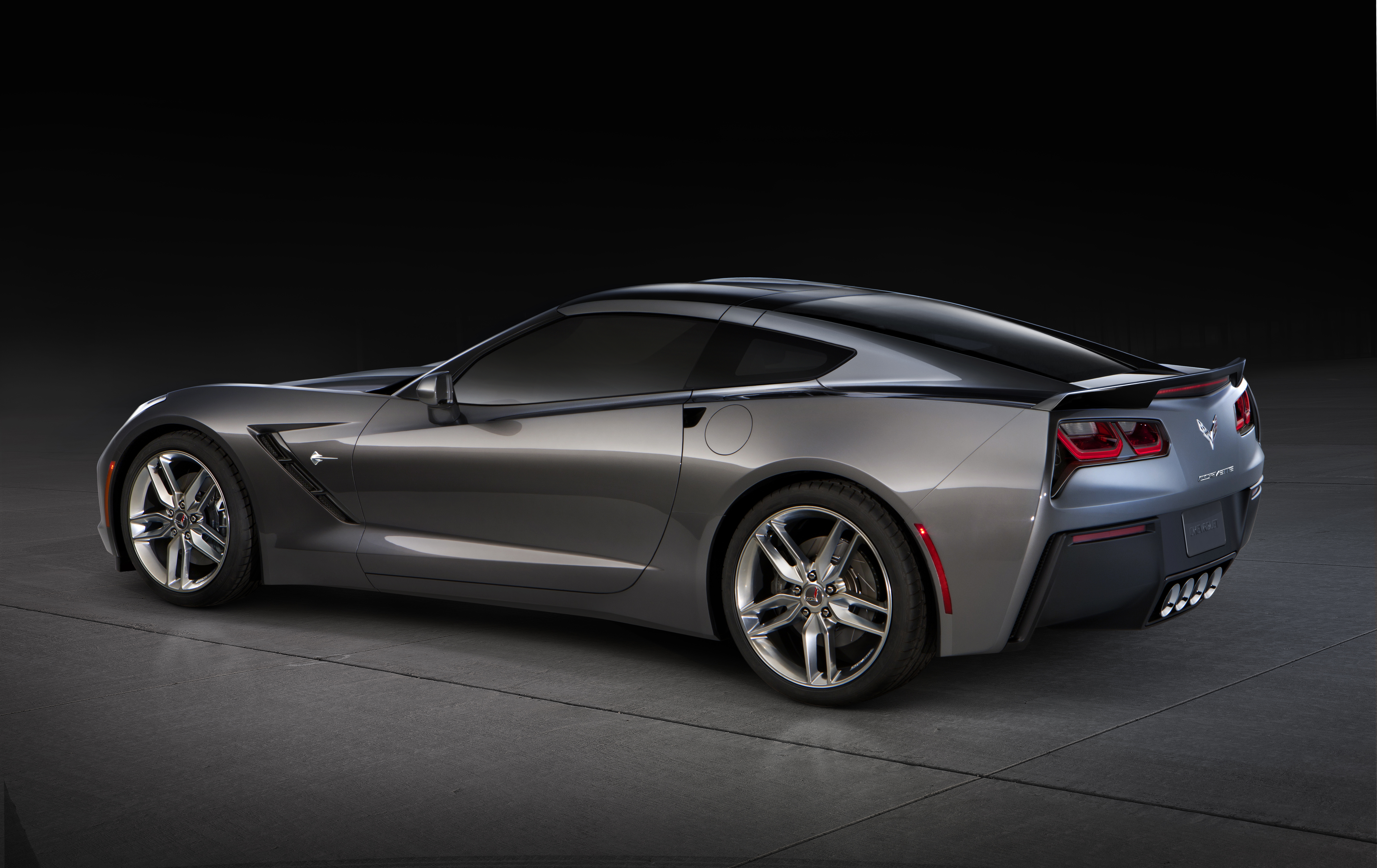 – by Adam Fredricks and MaryAnne Wendt

The 2104 Corvette Stingray World Debut event has to be one of the best launch events I’ve ever been lucky enough to attend. The most anticipated day for automotive journalists, car enthusiasts and Corvette fans happened on January 13, 2013. This was the day before Press Day of the North American International Auto Show (NAIAS) in Detroit, where the 2014 Corvette Stingray had its world debut at a private General Motors event. Over 2,000 automotive journalists were in attendance. Buses unloaded members of the press into an abandoned Detroit warehouse, which was converted into the event’s venue. We saw tray-passed hors d’oeuvres galore and drinks flowing everywhere. This was clearly a celebration. And we were about to find out why.

As the lights dimmed, journalists were on the edge of their seats, with loaded cameras and video equipment, fingers on the trigger. We stared at the big screen and watched the video of all the new Corvette details. The suspense was killing us! Guitarist Paul McGilloway from New York’s Arlene’s World Famous Live Rock n Roll Karaoke Band rocked some crazy riffs as he jammed next to the covered vehicle with colored lights dancing on the cloth. The big moment finally arrived.

As the cover slowly came off the black Corvette, a second red Corvette drove onto the stage and hit the rotating platform so that we could see all angles of this glorious piece of machinery. Presenting the New Stingray. Yes. My heart skipped a beat. My knees buckled. The Stingray is back. Taking styling cues from the 1963 Stingray and other models, the 2014 Corvette Stingray lives up to its legacy and exceeds expectations in design, performance and technology. At first glance, you can tell it’s a Corvette, only with sleeker lines, and an amazing rear end that you can’t stop staring at. If this were a woman, you’d be slapped from staring too long with your mouth open! This Stingray is the most powerful standard and most gorgeous Corvette model ever.

The 6.2-Liter small-block V-8 has an estimated 450 horsepower (335 kW) and 450 lb.-ft. of torque (610 Nm). It is also the most capable standard model ever, able to accelerate from 0-60 in less than four seconds and achieve more than 1g in cornering grip. It is expected to be the most fuel-efficient Corvette, exceeding the EPA-estimated 26 mpg of the current model. How is this possible? Thanks to Active Fuel Management (AFM), a first-ever application on Corvette which helps save fuel by imperceptibly shutting down half of the engine’s cylinders in light-load driving. The LT1 engine comes in an all-new seven-speed manual transmission with Active Rev Matching technology or a fuel-saving six-speed automatic (with paddle shifters) optimized for efficiency and performance.

Rev Matching blips or revs the throttle as soon as it senses you changing gears either up or down. The engine adjusts the RPM for a smoother or seamless shift. The new technology provided in the Corvette is able to make a novice driver feel like a pro. The new Stingray is 99 pounds lighter and 60 percent stiffer due to its carbon fiber body panels and aluminum frame. The 2014 Corvette is also equipped with Active Handling Stability Control and Performance Traction Management. The biggest improvements on the Corvette is in it power plant. Direct Injection, Cylinder Deactivation, Variable Valve Timing are to name a few. These improvements helped GM make a more powerful and responsive Stingray.

The five different driver settings allow you to customize your ride with modes from conservative to the most aggressive: Weather, Eco, Tour, Sport and the almighty Track. While in Track mode Launch Control is available. What does that mean? You can launch off the line with no tire spin. Go, Baby! Between each mode there are 12 different attributes that tune the ride and output of the power plant. These modes control the ride stiffness, exhaust sound, transition shift patterns. The layout and information show on the nicely designed gauge cluster.

General Motors added functional hood ventilation for engine cooling and quarter inlets for the differential and transmission cooling. Down force and aerodynamics played a big part in the Corvettes new design, improving on almost every aspect in the car from mileage, handling, responsiveness and all around comfort. Interior features include two seat options including a GT Seat w/ magnesium frame and Competition sport seat offering body support for aggressive driving.

Wanna drive topless? The carbon fiber roof panel is removable. Enjoy the sun as you crank up the tunes on your drive. Don’t forget the sunscreen! Cargo capacity? While we couldn’t find this information, the 2013 Corvette has 22 cubic feet of cargo space. That’s enough room for a couple of golf bags and some luggage for a weekend getaway with your mate. In the Corvette Stingray’s new design GM had to stay close to the Corvette’s roots. It had to look like a Corvette. This Exotic International Design stays true to the Corvette design.

The price hasn’t been released yet, but the current price of a 2013 Corvette starts at $49,600. Look for the 2014 Corvette Stingray at Chevrolet showrooms this Fall.

* Sexiest car on the planet

* Best looking rear end of any car ever