The Toyota Sienna minivan is popular for its reputable reliability and smooth ride. The Sienna is also known for its highly maneuverable driving dynamics, fitting sporty design and for being the only optional all-wheel drive minivan on the market. Toyota’s design prowess shows against competitors like the Honda Odyssey, Kia Sedona and Nissan Quest and of all it’s the shortest in length at 200.2 inches producing a more practical sized city transporter while carrying the crown for most cargo room in the class with 150 cu. in. 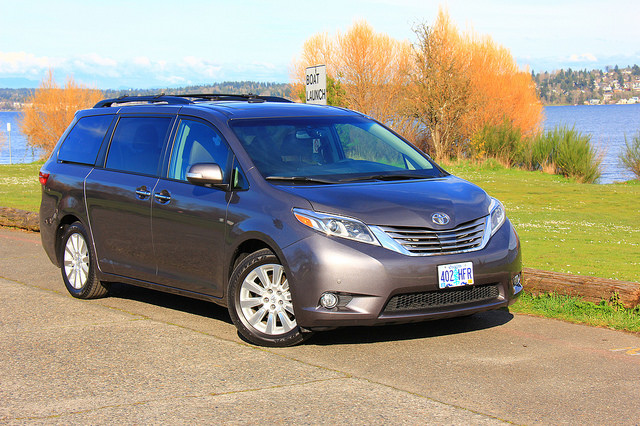 This is the sixth successful year of the current third generation 2015 Toyota Sienna full-size minivan with an MSRP of $28,600. It maintains its configuration as a front-engine, front-wheel drive seven or eight-seater four-door minivan. The sixth best-selling Toyota and the best-selling minivan through March this year receives a massive mid-generational refresh pumping up quality, comfort and performance over the previous year which is why I chose this ride.

Improvements include a slight restyling from the exterior through to the interior. Now with added first-class in-cabin features, better suspension tuning on top of a significant amount of new structural reinforcements. The mechanically unified platform has improved long-lasting rigidity, vehicle handling from straight-line speed to cornering grip plus a reduction in noise, vibration and harshness.

Leading safety and styling in the Sienna refresh is the new slimmer better projecting headlights. Standard across the wide Sienna model range is halogen lighting.  If you take a look at the SE line or the Limited line shown in the pictures painted in Predawn Gray Mica, both receive a different cutting-edge headlamp unit. It’s powered with HID lighting for its low beams lined with a striking luxury-type razor-shaped integrated LED strip for its DRLs. Quite Lexus-esque.

While the headlights lead the way, similar slight changes have been made to the surfacing to match the increased dramatics’ of sports sedan styling. Body panel tweaks have maximized its good looks. Another heavily refined area includes a tightening of the front grille.

Gazing past the beautifully re-sculpted front end my eyes ease up and around the slightly rear sloping roofline admiring how the C-Pillar meets with the new tail lamp design in a smooth letter J shape.  This is a beautifully modern curve to enjoy. The new LED tail lamps on our 2015 Toyota Sienna Limited Premium are standard throughout the line with the exception of the sporty edition SE line.

According to Toyota’s engineering team they added a total of 142 more spots welds to this year’s chassis. This is the biggest improvement of the entire mid-generational refresh. After six years refining this body Toyota has figured out exactly where to add each of those 142 welds to optimize strength, safety and decrease road noise. That is the benefit of buying a late-model year vehicle. This Sienna platform has been criticized, reexamined and thoroughly updated to extend its life bringing more steering character and better road isolation.

Having a somewhat revised chassis Toyota keeps its potent propulsion system from last year’s success. Powering the Sienna is the hard-gunning naturally aspirated 3.5 liter V6 gasoline engine spinning out a surprisingly usable 266 HP with a peak of 245 lb-ft of torque exactly at 4700 RPM, the sweet spot of accelerating or highway passing. It was pleasure piloting this buttery but robust praiseworthy power up and down the highway with standard max tow of 3,500 lbs trailing behind. Great for your jet skis or your track ready Toyota MR2. Reining in a mediocre MPG of 18 city, 25 highway; buyers will be happy to know the 20-gallon gas tank can take you up to 500 miles of range on the highway before another fill-up.

The highlight of the power train is its highly responsive 6-speed automatic ECT-i with Sport mode and manual gear shift ability. It accounts for a good percentage of why this is such an engaging drive. It wasn’t just the great transfer of power from the V6 engine or the new more solid chassis laying better power and grip moreover I was impressed by its immediate shifts up and down from my suggestions on the gearshift. This is a Toyota strong suit. Their transmission work is phenomenal. When picking up speed entering a highway I felt like the fluid drive automatic had a locking clutch hidden inside somewhere by the way it confidently pulled up to speed. It felt like it had no empty acceleration space through the mountainous torque curve. This produces a light-footed agile driving character by having so much tangible power ready at the pedal. 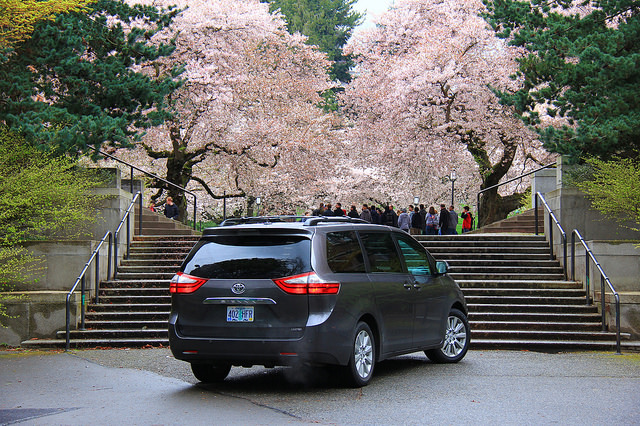 Similar to the sporty tuning of the exterior styling the Sienna’s suspension has been recalibrated to match it good looks. Continuing its proven suspension system from last year with a MacPherson strut-type setup handling the front end and a solid-tracking torsion beam construction in the rear have been finely re-imagined. The vehicle now has a really inspiring feel around bends and sweeping corners through the soft-feeling Electric Power Steering EPS system. I wasn’t the happiest with communication from wheel to road. It might have been the soft touring-style Goodyear tires but it’s a bit vague and a little rougher than I expected. Even so I was able to guide the minivan like it was a smaller Camry or Corolla. This Sienna might have a larger footprint but it maneuvers like a shorter, lower sedan.

Among all the important things when researching a car like its mileage, reliability and comfort another crucial area is safety. You’ll be happy to hear the Sienna is an IIHS Top Safety Pick for 2015 and receives 5-Stars for collision safety from Safercar.gov a website managed by NHSTA. Standard in-cabin safety features include a group of eight airbags including a driver’s side knee airbag which is a unique crippling area, Toyota has you covered. 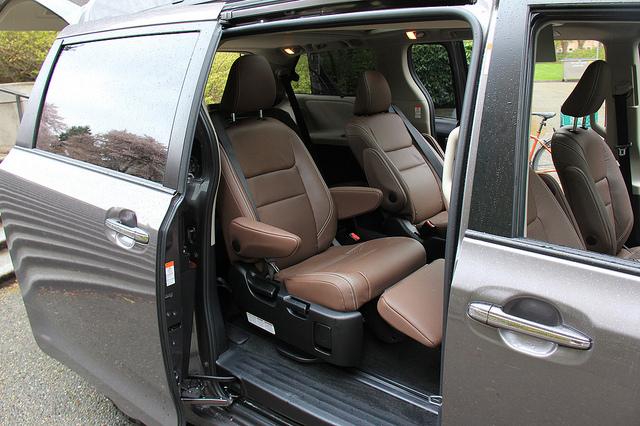 Our range topping trim line the Sienna Limited Premium model with an MSRP of $45,020 is fitted with all of the optional safety features available. Options include blind spot monitoring with rear cross traffic alert, front and rear parking assist sonar’s, Dynamic Radar Cruise Control, Pre-Collision system, Vehicle Dynamics Integrated Management System (VDIM), Safety Connect telematics plus Hill Start Assist. The Radar Cruise was ultra fun toying around with the new distance control button; I could choose how close I needed to be through heavy traffic or fully extended super cruising for maximum space and safety. Complimentary for a couple of months are options like Auto Collision Notice, Stolen Vehicle Locator, Emergency Button and Roadside Assistance but after that it’s up to you to get the best deal for month to month services. I imagine safety features like this in the future will be standard just like stability control over a decade ago.

In the same spirit that Toyota tuned the exterior the interior has just as many updates and continued comfort. A newly revised center stack now holds a smart three-zone air conditioning system with a ton of new buttons including three large rotary dials for easy use. The A/C can be controlled from the front or rear with a simple button, on top of having a new Driver Speak Easy function that transmits the driver’s voice to the rear speakers for family tourism or controlling the party. That A/C on the center stack is mated with a standard 6.1 inch touch screen on the L line or larger seven-inch touch screen for the rest of the lineup. So much more connectivity with the rear cabin it is as if you’re sitting next to your entire passenger group.

On our Limited Premium model, powering the seven-inch touch screen was Toyota’s Entune system that connects directly to your mobile devices over Bluetooth or USB. It’s received a terrible rating at the iOS App Store, although I had a great time using the system.  After a quick connection I was happily computing and managing my life from the screen. Powering your caller’s voice or your favorite music is a thumping JBL audio system fitted with 10 speakers including a subwoofer with HD radio and 3 months free of SiriusXM. 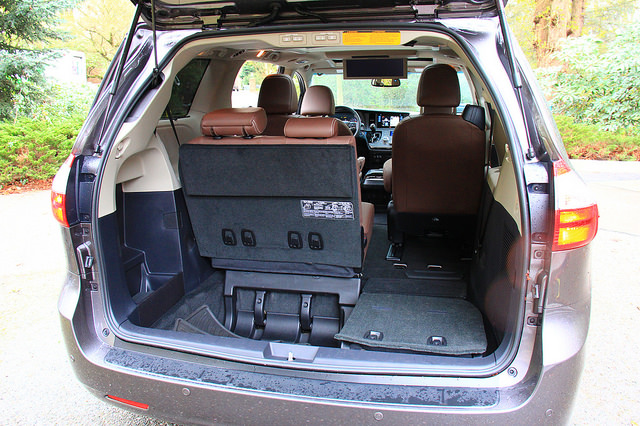 A real amazing feature is the Dual-View Entertainment Center in the rear with Blu-Ray, HDMI or SDXC ability. Taking the award for largest rear cabin fold down screen at 16.4 inches wide it’s able to play two different movies at once or has the ability to take up the entire screen with one movie easily viewed from the third row. Audio is played through the wireless pair of headphones or the great JBL Surround Sound system. Coupled with the amazing screen fitted to our Limited line are the brilliant second row captain chairs with foldout leg rests on top of having generous legroom. 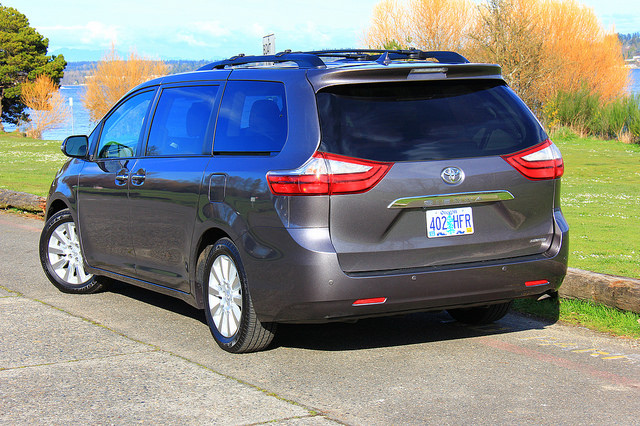