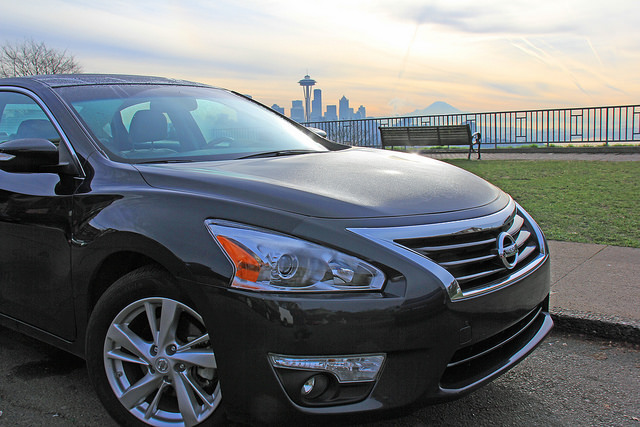 Each year Nissan shows how progressive and ambitious they are as a full-line automobile manufacturer. Years ago they envisioned themselves as an auto industry titan bringing unique and original vehicles first to market and now they do. We see that integrity in the world’s first mass-produced electric car the Leaf, ultra-optimized 2.7 second to 60 mph NISMO GT-R supercar and the world’s first convertible crossover Murano softtop. These examples of their commendable engineering and perseverance to offer “Innovation That Excites” extend throughout Nissan’s lineup. 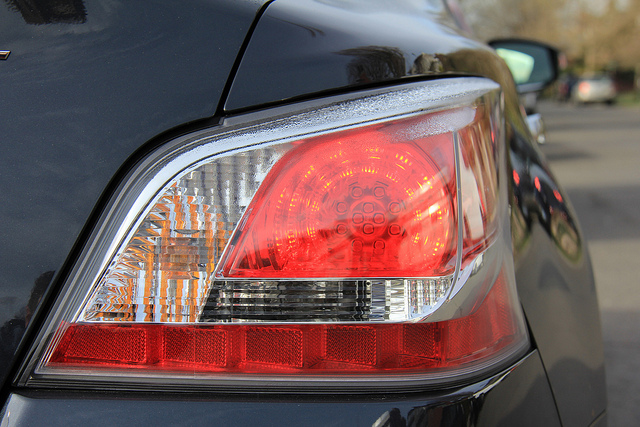 The 2015 Nissan Altima sedan shares that passion of individuality with refined design and build quality. Nissan declares that this generation of Altima embodies an on-road personality and cabin atmosphere found in vehicles in higher segments. It exceeds the expectations of class comfort achieving a smooth and gentle, quiet grand touring ride. The Altima presents a soothing safe, maneuverable and fuel efficient vehicle at an ethical value which is why I chose to review this ride.

The entire Altima sedan line is assembled as a five-passenger, four-door, front-wheel drive vehicle in 2015. Now in its third year of its fifth generation it starts at a MSRP of $22,300. The 191.5 inch long sedan competes in the super competitive midsize sedan segment against cars like the Honda Accord, Toyota Camry and Chrysler 200.

More features standard in almost every model line this year. It’ll be offered in model trim lines 2.5, 2.5 S, 2.5 SV, 2.5 SL, 3.5 SL and for a limited run the 3.5 S and 3.5 SV. Assembly choices include eight exterior colors, four interior designs including two leather and packages or individual options that will uplift functionality and safety.

Throughout my test of the top of the line model with the smaller engine, Altima 2.5 SL, I was impressed the agile suspension and how the tight chassis felt. Nissan’s main goal for this generation’s chassis and handling evolution was to remove weight, add reinforcement bracing and enhance rear suspension abilities. For me each task was achieved. The Altima has one of the lowest curb weights in the midsize class at 3108 lbs (base model) utilizing lightweight materials like aluminum alloys. 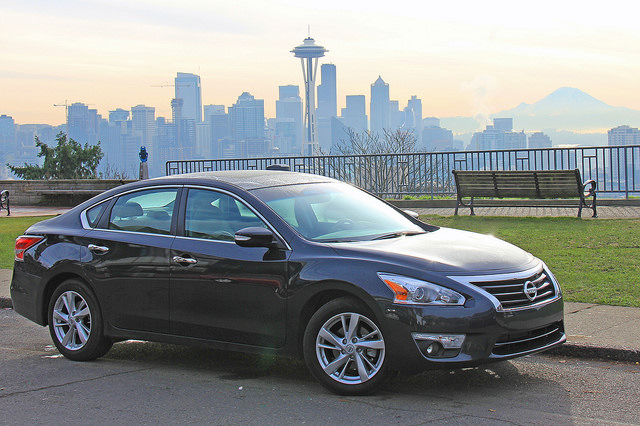 It tracks impressively stable with Z car-inspired rear suspension concept, together with the reputable European Sachs gentle dampers. Holding a line through a curve at highway speeds was complete ease employing the four-corner fully-independent suspension using a strut type up front and the multi-link rear.

The new rear contributes to low body roll plus electronically-assisted light braking on inside wheels through turns from the Active Understeer Control (AUC) feature helps keep a feeling of balanced grip from entry to exit. No kickback, abrupt bumps or fighting the steering wheel either; instead it was even and stable. I just set a steering angle and powered through. Not as much road feedback through the Electric Hydraulic Power-Assisted Steering (EHPS) system as I like nonetheless, it was perfectly dialed-in and directly on-spot when I needed it. The car shines as a highway cruiser and a cornering sleeper although the grand proportions are bit tough to articulate when parking.

Powering the Storm Blue painted Altima 2.5 SL tested was a naturally aspirated 2.5 liter inline four-cylinder gasoline engine with 182 hp and 180 lb-ft of torque. It ranks up there with the best-in-class in efficiency with a mpg rating of 27 city, 38 hwy using an 18-gallon tank will send you a total 684 miles on the highway. Engine choice number two is Nissan’s almost bullet-proof reliable VQ35; a naturally breathing 3.5 liter six-cylinder engine pushing out 270 hp and 251 lb-ft of torque. Fuel economy for the six shows 22 city, 32 highway but I imagine with the standard equipped paddle shifters for all 3.5L you can work to achieve better.

Both engines are paired with Nissan’s in-house Xtronic CVT transmission. Simply it is a metal alloy belt operated transmission with two pulleys continuously changing ratio to find the optimum amount of power and efficiency. It’s continuous shifting operation provides a wave sensation of acceleration which races the engine up in RPM’s and sound until cruising speed is met by you or the cruise control. I find the finesse of power delivery from the Xtronic to be a nice replacement to a geared box for the fact there are less moving parts, it’s lighter, smoother and quieter while cruising.

During a heavy Seattle rainstorm Nissan’s electronic stability management programs and Continental tires were put to the wet test. Driving across the legendary I-520 floating bridge through pushy winds and intense water falling the Altima proved it could handle. The Conti tires had plenty of traction in the dry and light rain but when the heavy rains began the Vehicle Dynamic Control (VDC) had to work overtime with the Traction Control and four-wheel anti-lock disc braking system kicking-in all at the right time. It is a masterpiece example of this vehicle being a smart choice alternative to an all-wheel drive car. Optional safety features available include Blind Spot Warning, Lane Departure Warning and Moving Object Detection. All of this standard on upscale models.

The Altima’s cabin is shielded by Nissan’s Advanced Air Bag System (AABS) packaging with six airbags standard. It’s in the top percentile for safety. The IIHS rates it as a “Top Safety Pick” and NHTSA gives the Altima five-stars for frontal and side impact collisions. A unique feature to Nissans, on the Altima is the Tire Pressure Monitoring System with the no tire gauge easy-fill tire alert. Say goodbye to the tire pressure gauge! While air is injecting your four-way flashers light up blip on and the horn sounds when each tire filled to the recommend settings.

The ambiance of the in-cabin atmosphere leaves an impression of premium comfort, upscale soft-to-the-touch materials and a quiet ride. Nissan’s top ranking luxury cars (Infinity) are so quiet, the engineers decided to pipe back into the cabin exhaust tones for excitement. Nissan has taken those quiet cues from the upscale market and delivered it to the midsize class. The Altima’s interior has been fully sealed on top of having absorption materials laid in key places to bring down the in-cabin noise 30 percent from the previous generation. It’s a royal improvement and conversations in the car will be enjoyed from any seat. It’s so serene for the price. 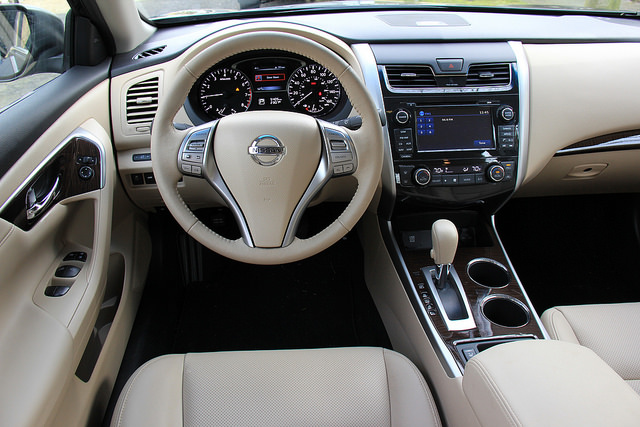 At the core of comfort rests the Zero Gravity two front bucket seats, standard equipment on all Altima’s; they were blueprinted in conjunction with NASA. The objective of the seats is to provide a neutral posture position with superior even support reducing fatigue while driving. This allows a driver to focus more on safe judgment behind the wheel instead of a sore body. “It was almost as if I was floating,” my passenger said during short drive through the city. I even felt as if I was a passenger the seats were so comfortable. Kelley Blue Book just awarded the Altima one of the 10 most comfortable cars under $30,000.

The instrument panel has black surroundings with bright white illumination for clear reading. A simple tachometer on the left, speedo on the right and in the middle of the instrument panel is the Advanced Drive-Assist Display which is a four-inch HD color-display. Using 3D effect graphics, gorgeous ensemble of lighting colors and easy to read fonts it is a pleasure to use. I never caught myself staring down at the panel too long. It’s customizable through steering wheel controls and even the optional navigation is displayed through the Drive-Assist Display. 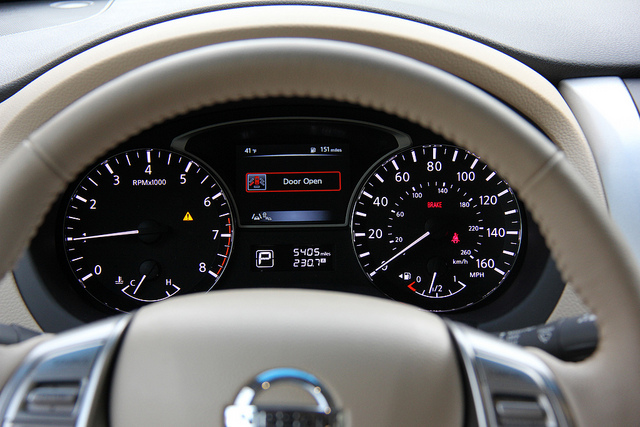 The optional NissanConnect with Mobile Apps and Navigation was real quick for me to figure out. Pairing, operating and touching were all simple and intuitive like it should be; one of the best. They have a close partnership with Apple that’s bound to get closer in the upcoming years. The only oddity with the entire system was the seven-inch screen you get with Navigation is way too bright at night when I was parallel parking. I could barely see the outside the windows for true depth perception, yet I aced all the parking jobs using the camera so it worked out well in the end. The quick and well functioning vehicle operating software is a true achievement.  That’s why I liked this ride. 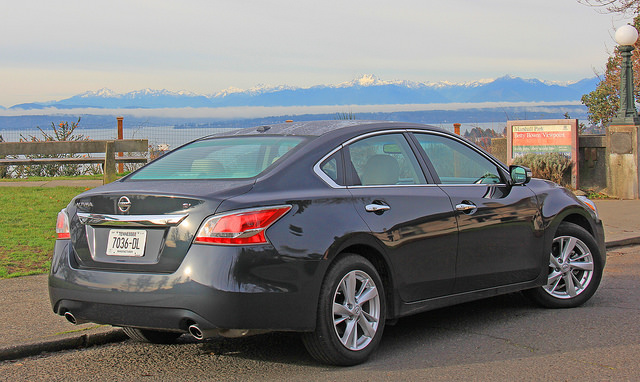