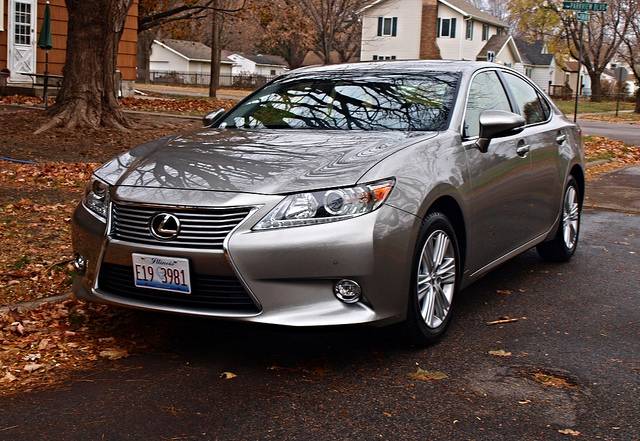 Let’s call this the “Marcia Syndrome.”

If you were a fan of “The Brady Bunch,” you will understand where I am going with this. The middle sister, Jan, would always be jealous of Marcia, the eldest, because of all of the things she would get away with. In frustration, Jan would bellow “Marcia, Marcia, Marcia!” It was her vent in questioning her unimportance to the Brady family – or the perceived unimportance of Jan.

Twenty-five years ago, Lexus sold “Marcia” and “Jan” alongside each other as their first offerings as a brand. “Marcia” was the LS 400, the most touted car of 1990. It challenged the notion of what a flagship was at the time with advanced technology, a solid powertrain and luxury that matches up with the rest of the world. It became the first car from Japan to compete on an equal playing field with the likes of the Mercedes-Benz S-Class.

Many people paid attention to the LS 400, as it was the star attraction at Lexus. They passed up the ES 250 simply because no justified its price. Of course some pundits ruined the car by pondering whether that price justified a gussied-up Camry without a B-pillar.

As Lexus celebrates its quarter century of existence, it seems that the tables have turned on its original models. “Marcia” is sold at a steady rate and has been equaled, if not exceeded, by its competitors in the flagship field. However, one would argue that the LS 460 and LS 600h L are still serious players in a game where trumping each other with more advanced technology, active safety features and levels of luxury is the name of the game.

Meanwhile, “Jan” has become the big seller amongst passenger cars at Lexus. Though second behind the RX crossover, the ES lineup found plenty of consumers who find its high value and great comfort major plusses. For every LS sold, 7-8 ES models also drive out the same dealership.

For 2015, the ES simply looks the part of an original. In itself, the ES is the only front-drive Lexus sedan in the lineup that can seat five comfortably, perform competently and provide the same level of luxury expected from this brand. To find out, I drove the ES 350 – a direct descendant of the original ES 250.

The overall look of the ES was executed with moving the design bar for its front-drive mid-sized sedan further. It starts with perhaps the best execution of the brand’s signature spindle grille. The way it sits up front, without exaggeration of afterthought, is spot on. Flanked by a lamp housing with running LED lights, the front end is an invitation to drive this 3600-3700 pound luxury sedan.

Recent Lexus styling lends to a near flat side profile. However, the ES shakes things up with a C-pillar that is handsome and functional. You would think it is a coupe with its glass ending at a “lip” and the fastback-like tail. In all, the ES 350 has a standout look to go along with the intention on being a leader in its class.

Step inside and you will find the latest in Lexus interior design. The big instrument binnacle has gauges and screens worth reading on the fly. In the middle, there is the requisite screen housing the navigation and screens induced by an improved Remote Touch mouse on the console. Every knob, switch and control simply work right to the touch, though the Remote Touch can be a bit fiddly on occasion, especially when setting presets on the radio. 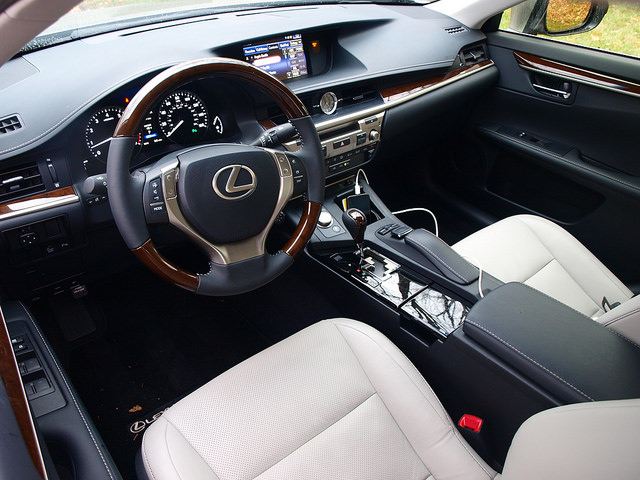 The seats are just right for the ES. There is enough bolstering to keep you locked in on the curves and enough adjustments to make you comfortable anywhere you point your chosen ES. The space inside is quite huge with seating for five average-sized adults. Middle passengers would feel just fine in the back seat. The ES 350 is trimmed with dark burled wood grain and perforated leather, especially in the Luxury package in our tester.

Your soundtrack is piped through eight premium quality speakers. Your choice of soundtrack comes from a choice of HD Radio, SiriusXM satellite radio and Bluetooth audio streaming. Add navigation with Lexus Enform, and the ES is ready to help guide you on your way.

Under the hood is Toyota’s venerable 3.5litre V6, offering 268 horsepower on tap with 248 pounds-feet of torque on the low-end. The response from the throttle is immediate. It gives the stately midsized luxury sedan some life. The V6 gets a smooth shifting six-speed automatic transmission. Power goes directly to the front wheels. By selecting drive modes, you will find good response in any of them – even in Eco. Sport is where the ES 350 comes alive, but it truly feels at home in Normal. In all, this driveline works perfectly in the ES 350 now. 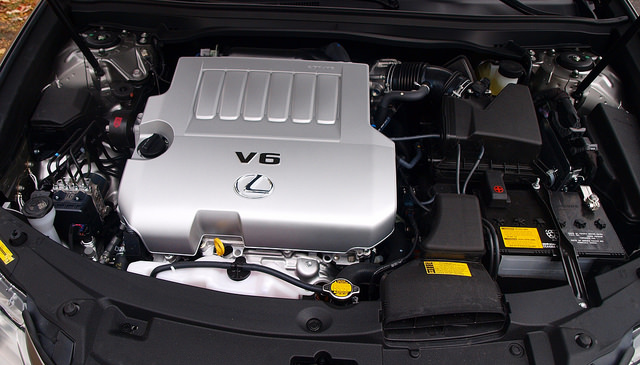 The best way to describe the experience on the ES 350 is “soft.” Yet, this softness provides a very smooth ride that absorbs everything in its wake. It is the kind of ride that makes a rear seat passenger wants to curl up and snuggle in the back seat without being interrupted. In the corners, the ES 350 also felt soft, but controlled.

Steering action was practically same with some numbness in response and feedback. The turning radius is good for its size. When on the highway, the steering can be very soft. Putting the Drive Mode knob into Sport should fix that. While the ES 350’s brakes have a sharp action, providing good stops in both normal and panic situations. After trying to outdrive some of the sportiest vehicles around, I can honestly say how much I enjoyed driving the ES 350.

When the roads are less than drivable, the anti-lock brakes and traction control systems keep the ES in check. At the same, the Michelin MXM Primacy tires provide a quiet ride and grip to keep you going on dry or snowy surfaces.

One thing I love about the ES 350 is its ability to sip fuel, even when most of its competition drinks it like there is an indefinite supply. This tester earned a 25.6MPG average. 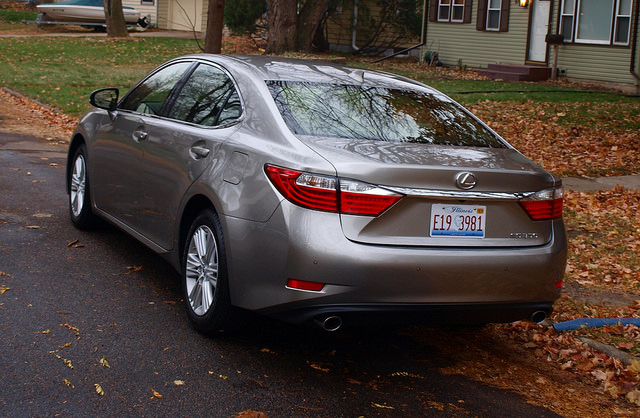 – The Lexus ES offers a great choice for anyone looking for a top shelf, front-wheel drive sedan with badge appeal and a full swath of luxury. It is inoffensive and elegant at the same time. Not to mention a serious value for what you get.

– However, “Jan” has definitely her groove on. She may be inoffensive and elegant, but she’s a much better Lexus than she was 25 years ago.