Kia Motors protects their position in the auto industry as the leader in offering the most value in about every new vehicle they build. As Chevrolet is to domestic cars, Kia is to import cars. Kia has become an established brand in America today for presenting more modern features and safety standards than most of the competition.

Needless to say, we were so excited to test Kia’s first electric car, the Kia Soul EVPlus. Kia’s smallest Crossover, the Soul, is better known as their Urban Passenger Vehicle for its tall, small vehicle size complimenting the human body with effortless egress and ingress. The 2015 Kia Soul continues on as a 163 inch long fun-to-drive five-seater, four-door front-wheel drive enlarged Kia Rio. It is now in its second year of its second generation carrying over all the successful improvements from last year’s major redesign.

Updates continuing from last year into the 2015 model year include a reengineered platform, new styling inside and out with new propulsion systems.  Along with this year’s expansion of the model line is the release of the all-new electric-powered Soul EV. Kia’s first zero-emissions all-electric powered vehicle will be for sale first in California then on to other eco-friendly states through 2015.

Starting MSRP for the 2015 Kia Soul EV base is $33,700 and a little more for the Soul EV + (Plus) model shown in the pictures painted in a dazzling Caribbean Blue with a white roof and wheels. It leads the under-$45,000 EV segment for the most range with 93 miles total and for most interior space measuring in at 97 feet of volume. The Soul EV tops the competition by about 15 more miles driving range than the likes of the Nissan Leaf, Ford Focus EV, Volkswagen e-Golf and the Mercedes-Benz B-Class EV.

That is why I chose this ride it has the longest range, most interior room of any affordable EV and truly is an exciting car to drive.  The way the power band instantly comes alive from the electric motor without the hesitation seen by most gasoline engines, it is genuinely a real-life practical choice as a replacement for your gasoline or diesel vehicle.

From what you can see in our WTR? photographs not much has been altered from the gasoline second generation Soul to the Soul EV. There are subtle styling elements that enhance its class over the gas model. For instance, the grille has been expanded to fit the charging ports with a spring-loaded charge door and the lower front fascia has been smoothly bulged up and out instead of sharply down and out. This offers better proportions with a less threatening visual front end making for a more sophisticated, respectable appeal instead of that sporty edge from the gasoline model’s styling.

The headlight structure has been totally enhanced as well with LED DRLs atop the unit with twin halogen projector beams for the highs and low beams which flooded the road superbly at night for such old lighting tech. Then below the beams is a gorgeously lit orangey yellow LED turn signal across the bottom of the unit.

The futuristic front sets the tone for the rest of the modern boxy body. Advancing rearward past white mirrors with integrated turn signals is the black painted A-pillar embellishing the floating roof that takes most of the attention of the design.  Looking past the roofline where the white paint meets the blue on the C-pillar are these high-mounted brake light units that were amazingly good in traffic. I never had too many tailgaters, everyone responded well to the high and bright LED brake lights.

The monumental changes are within the Soul EV. Now instead of a hazardous fuel tank it has a 600lb lithium-ion polymer battery packed beneath the floor and instead of a gasoline engine with hundreds of little moving parts to break it has a simple but powerful AC synchronous permanent magnet electric motor. 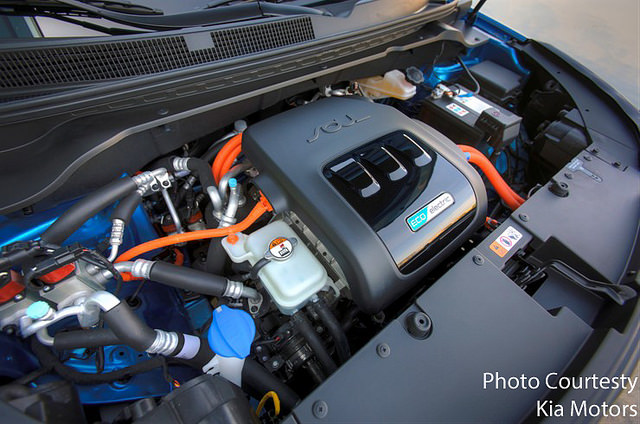 The star of the car is the large, mid-located lithium-ion polymer battery pack that lays flat under the front and rear seats providing great balance and safety. Kia has added five structural cross-braces to the undercarriage of the steel unibody directly below the battery supplementing the weight which in-turn increases rigidity and boosts its athletic driving dynamics. Its feels anchored to the road by providing an impressive low center of gravity making for un-tip able highly maneuverable, sports car-esque road feel. The battery itself is an air-cooled 192-cell battery pack with 360-volts, 27 kWh and 200 watt-hour/kg. Kia has given a total range of 93 miles with an EPA MPGe rating of 92 highway, 120 city. 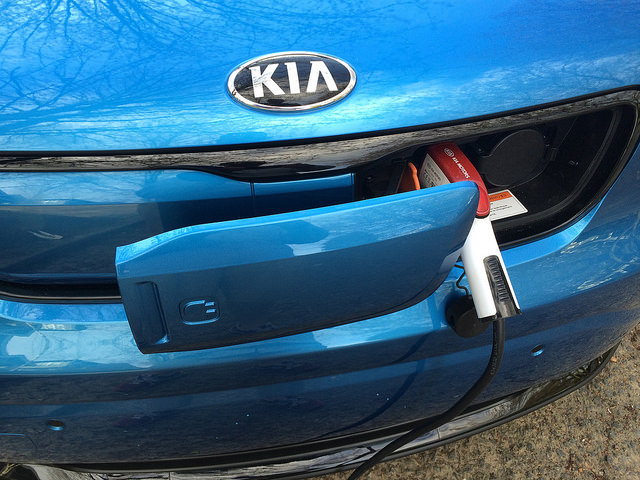 The multi-layered magnet electric motor produces a trusty 109 HP with a hard pulling 210 lb-ft of torque at the ready from 0 MPH. Kia offers a couple different driving modes for spinning up the motor. There is the traditional “D” for drive mode, “B” for regenerative braking mode and Active Eco System button that lowers all torque by 20 percent and increases regeneration by 75 percent giving each of those modes another character. Driving in B mode I found that the Soul EV motor braking was so powerful I didn’t even have to use the standard disc brakes. I could drive with one foot modulating the pedal easing up off the accelerator pedal for braking and regening. It was great driving with one foot and one pedal through the city.

Charging the car was easier than filling up a tank of gas. The Soul EV is equipped with three space-age charging ports. First there is the standard SAEJ1772 Level 1 (120v), Level 2 (240v) and a CHAdeMo DC fast charging big port (480v). Through the 120v charger it takes about 24 hours to charge from a completely discharged battery, with a 240v it’s said to charge in 5 hours and with the CHAdeMo the Soul EV will charge in 33 minutes. Through our time testing the Soul EV we only used the standard home charger that comes with the EV which is 120v.  In our city driving we never made it past the 85 mile range but I imagine you can twist out more being super efficient on the pedals.

The most important factor when researching a car is its safety. Compact cars struggle with their size and crash ratings but the Soul is more than safe with the IIHS Top Safety Pick for 2015 and getting 5-Stars for overall safety from NHSTA’s Safercar.gov.

Safety begins with your abilities behind the wheel but you might not always catch everything or everybody in traffic. That’s why it’ll be a good idea to look at the + Plus model who has proximity sensors alerting you of anything around the vehicle.

It was pleasure piloting the Soul EV through their new Flex Steer System with three modes on the motor-driven power steering system. From Sport, Regular to Comfort the nimble front MacPherson strut-type suspension to the planted rear torsion beam setup was all great. There was more resistance from Sport and an easier turn in with Comfort. Not as much steering wheel to road wheel feel but it was more than enough to slalom through the small city streets of Seattle without breaking a sweat.

The Soul EV has power everything from the windows, heated mirrors, driver’s seat and security system. It even had heated seats in the front, rear plus a heated steering wheel. On our Plus model we had solid gripping leather upholstery with blue piping but the base model has a nice cloth as well with the blue electric piping. 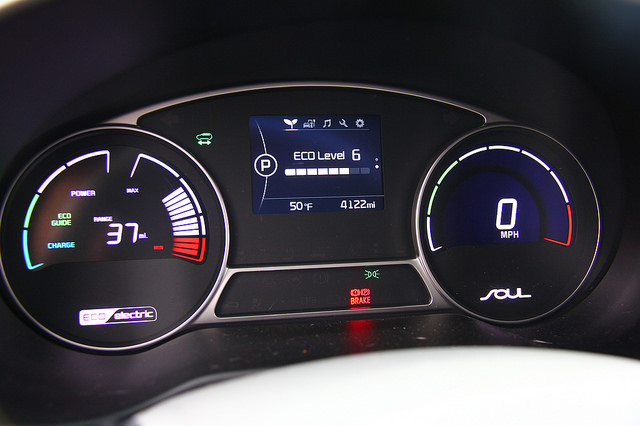 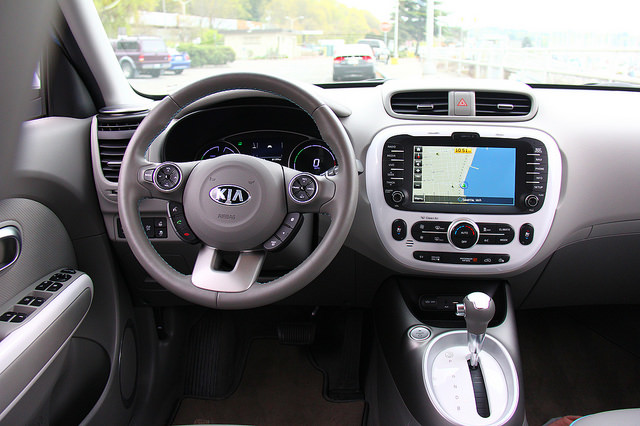 The instrument cluster is a full color OLED screen showing Kia’s take on the gauges we should be keeping an eye on when driving an electric car. Meters like energy consumption and energy collecting is reported. A big eight-inch touch screen is standard with navigation and Bluetooth. The infotainment is operated by Kia’s UVO services with five years complimentary with an app that remotely reports on in-vehicle information.  Reporting info like the battery level, distance to low, charging times, charging level ratios and remote controlling the HVAC system to preheat the car in the morning. 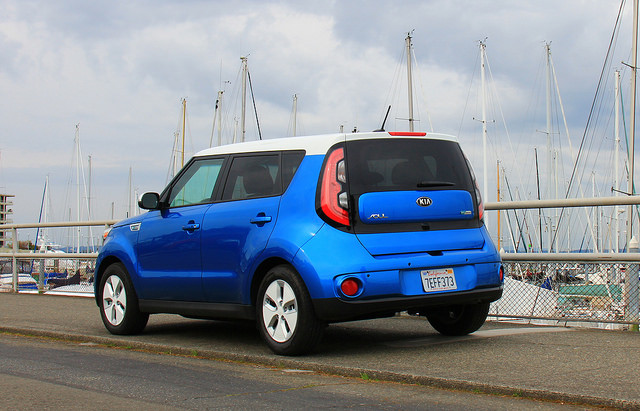 – Small, Tall Construction is a Joy to Drive