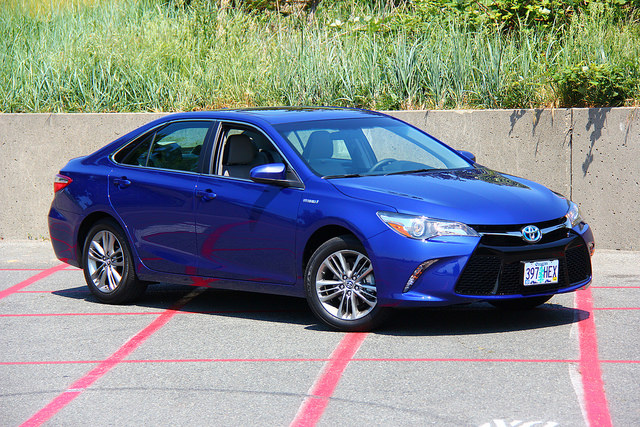 The Toyota Camry Hybrid’s new-era legendary status stems from its proven long-life and highly economical drive systems.  Also legend is the ease of use behind the wheel, gentle hospitable ride and future resale value. This year Toyota overhauled the design of their Camry Hybrid thrusting the passenger car nameplate into a new sportier generation. An entirely new look and on-road feel the Camry Hybrid continues as a four-door, five-seater front-wheel drive midsize sedan now at a longer overall length 190.9 inches.

This new Hybrid is a smart blend of new-fashion fit body assembly with quality old-fashioned efficient gas-electric power. It was clear from my first drive, Toyota’s remastering of the Camry Hybrid body noticeably raised the level of cabin refinement with added driving dynamics. Those are the reasons why I chose this ride to review.

The most noticeable updates can be seen by the naked eye examining the vehicle’s completely new exterior and sports sedan stance. Every panel and lamp has been reimagined for better aerodynamics with the intention of getting more MPG and quieting the wind around the vehicle at speed. 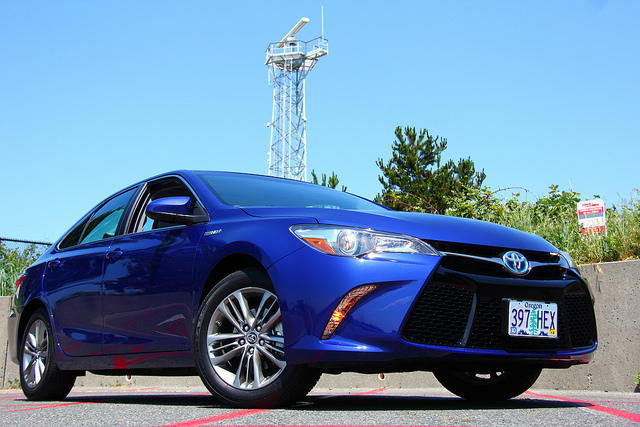 At first glance taking most of the attention is the new wide-mouth grille painted in a piano gloss black on our mid-level trim line SE sport model shown in our WTR? photographs. Scanning your eyes past the air gulping grille you’ll notice the new Blue Crush Metallic paint color, glimmering off the gorgeously curved hood, available only for the SE model. 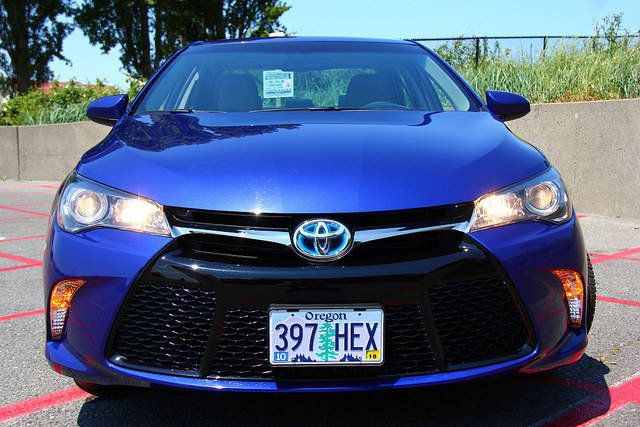 Complimenting the aerodynamic front are swept back headlights and vertical aligned lower turn signals with daytime running lights. The SE model comes standard with halogen high and low beam headlights with all other light fixtures fitted with traditional filament bulbs. The halogen headlights offer a good coverage of light at night even though it’s old tech. The structure of the projector beam displays a massive amount of light with halogen tech which is brilliantly designed. 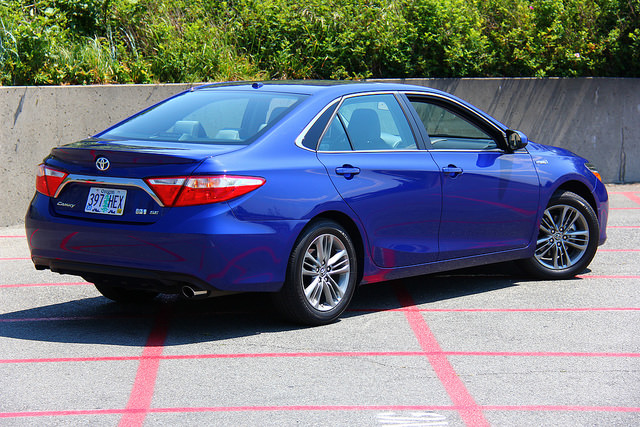 Pushing your vision past the headlights you’ll see the fenders rolled out bit wider this year housing widened front tracks.  Moving the wheels further apart enhanced its sport sedan styling and drive. This is a smart technique for adding honest stability. Looking farther down the body, the new bold side line character across the doors wraps the design together presenting a strong profile.  It extends through to the bulging rear quarter panels and large aerodynamically shaped tail lamps. Topping off the SE sports model on the trunk is a racy lip spoiler that looks humble, aero savvy and not too big-wing flashy. 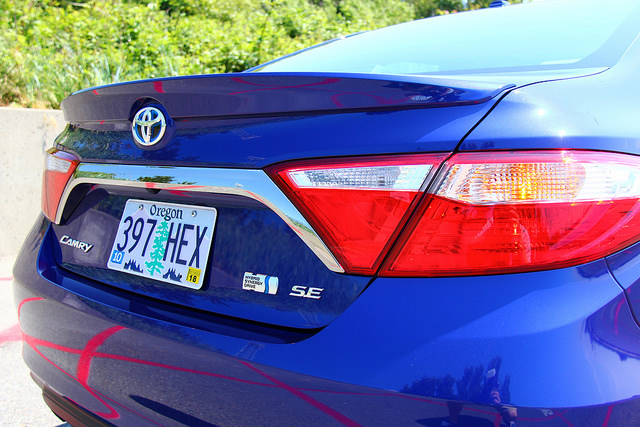 Advancing the Camry Hybrid’s platform was the most important part of the entire design overhaul. Working from last generation’s chassis advancements Toyota added a tremendous amount of spot welds to the door openings for this new generation. By locking in a more solid foundation Toyota is able to engineer a livelier personality and less harshness into the steering and suspension.

The recalibrated Electronic Power Steering system with the sport-tuned four-wheel independent suspension system is agile and quick to respond to steering inputs. The sharp steering and supple SE sport suspension deliver exceptional body control. Over mildly rough road it is soft for its crisp handling which is a unique feel.

However when we did hit bad roads and deep potholes the body, steering and suspension did get rocked hard and loud but sailed over it without leaving a feeling of damaged goods. Overall I appreciate how the car maneuvers so accurately but the steering still felt a little too distant from the road to the steering wheel for my sporty taste. I imagine the non-sport models would lose that harsh bottoming out without the tighter suspension.

Powered by Toyota’s established and acclaimed Hybrid Synergy Drive System, our SE trim line gets a fuel economy MPG rating this year of 40 city, 38 highway. The range is out-of-sight good. Its driving range on a full 17-gallon tank is up to 680 miles on the highway.

The Hybrid Synergy Drive propels the Camry Hybrid by mating a 2.5 liter 4-cylinder gasoline engine with a 650-volt AC synchronous electric motor under the hood channeled through an electronically controlled continuously variable transmission (ECVT). The large hybrid battery pack is intelligently placed in between the rear passengers and trunk retaining all of the trunk’s cargo space and adding low rear mass for good front to rear weight ratio balancing. 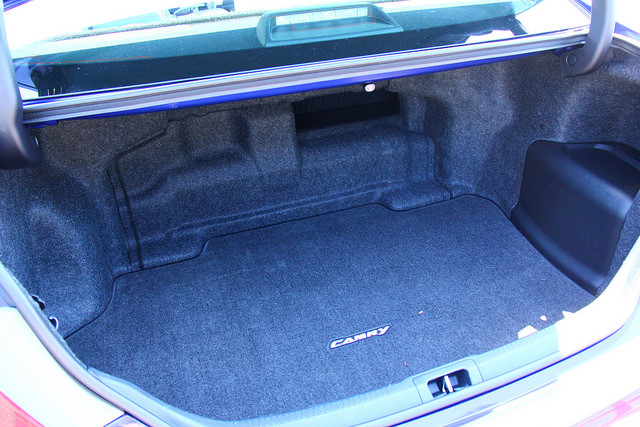 Starting from 0-1500 RPM the electric motor does most of the work using roughly 200 lb-ft of torque to pull you up to speed. If you’re light on the power pedal you can continue in full EV mode until you pass the 1500 RPM mark where the 156 HP gas engine cranks on to gracefully takeover power delivery. If you’re heavy on the pedal the gas engine will jump on early to deliver more power immediately. 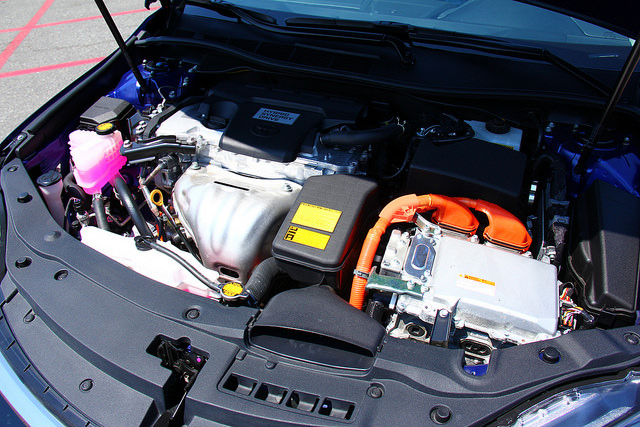 Leaving the transmission in D without any of the two Drive Modes on, EV or ECO Mode, the propulsion system was consistently harmonious and predictable in its power transfer never leaving a gap during acceleration. The other forward gear placement for the tranny is B which provides a bit harder accelerating along with harsher regenerative braking kick back when you release the power pedal.

Daily driving in the city I rarely got enough battery juice reclaimed through the braking system for activating the EV Mode, enabling only electric drive, but when I did it felt like a little NEV that I could tool around like a golf cart. It is luxuriously quiet and pleasant in EV Mode for up to 1.6 miles on a full charge. The ECO mode cuts throttle and air conditioning power and in-turn saves energy and extends fuel economy.

NHSTA’s overall crash score hasn’t been calculated yet but the 2015 Camry Hybrid tests 5-stars for saving the driver in a frontal crash and 4-stars for a passenger and a rollover crash. In those events the Camry Hybrid has 10 airbags now for increased safety. The best way to avoid those instances is using the power assisted 4-corner disc brakes with electronic safety features such as ABS, brake assist, brake force distribution, stability control and smart stop technology. These are all under the Star Safety System which also includes a road gripping traction control system along with other safety features like the whiplash lessening front seats, TPMS and a backup camera.

Opening the door to the Camry Hybrid SE you’ll first find the SoftTex fabric wrapped seating environment. Sliding into the driver’s seat I could sense the fabric is grippy enough to hold you still but also slippery enough to easily egress out of the vehicle. Adding to easy ingress and egress are the shallow bolstered seats that are supportive enough for short trips but might cause early exhaustion on longer trips without proper bucketing bolsters holding passengers tight in place. 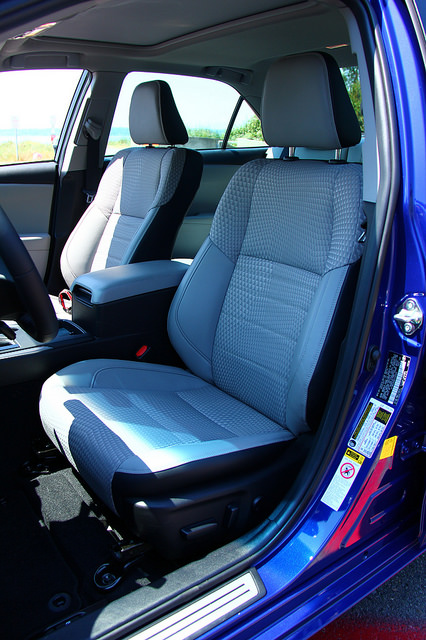 Now sitting in the 8-way power adjustable driver’s seat looking at the controls I was pleased reading the new Optitron gauges in the instrument cluster with the large TFT display placed in between the two large round gauges with loads of data to display. I usually would have the instant MPG and distance-to-empty gauges up in the TFT. 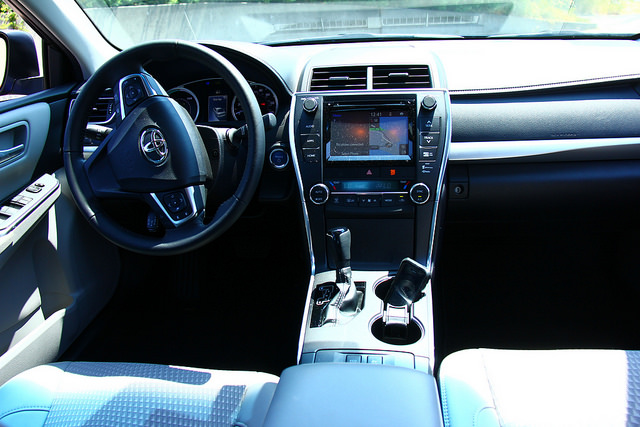 Looking to the right of the three-spoke steering you’ll find the new center stack of infotainment. Sitting high on the stack is the optional 7-inch touch screen surrounded by large easy to read push buttons powered by Entune entertainment system with navigation. Entune is an app-based operating system that connects with your Apple or Android Smartphone’s through Bluetooth allowing your information to be mirrored into the car for simple use of stored entertainment, contacts and more. The Camry also has an AUX port and a USB 2.0 plug for simpler access.

Below the touch screen are the climate controls with their own buttons, rotary dials and thin LCD read out for quick referencing. This is a truly good design by coupling controls in their own areas on the center stack for less confusion and chasing controls to where it reads out. Good job Toyota keeping in simple. Under the climate controls is a deep storage compartment that has the option for wireless charging. Most mobiles devices need a special attachment to accept a charge but there are a few mobile devices with built-in wireless rechargeable batteries. 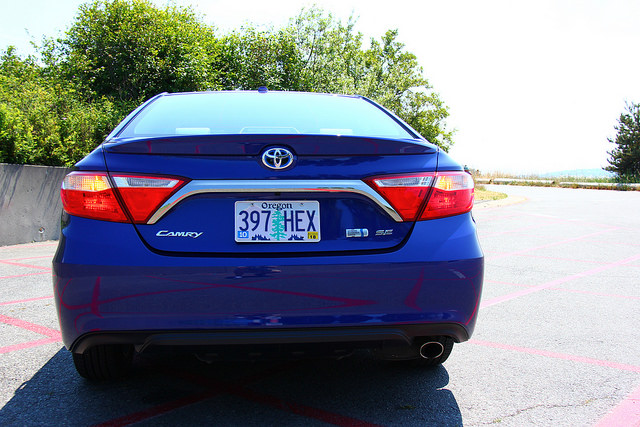