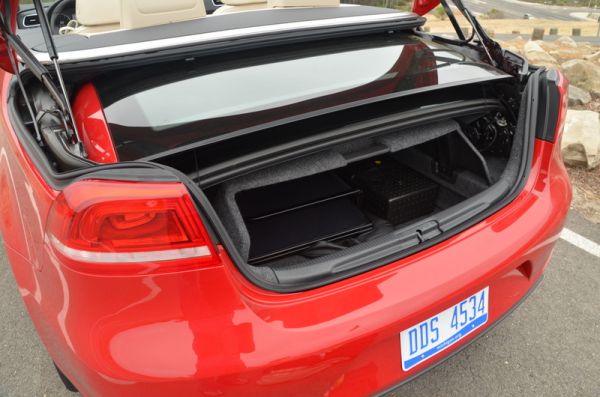 Life can come at you from all sorts of angles bringing forth everything from feelings of joy to anger to sorrow. There are all sorts of things in life that can inspire these feelings and they can range from the serious or life threatening to the highly banal or common. So how can a person cope in this high pressure world? Well, the answer is easily found if you find yourself behind the wheel of either the 2015 Volkswagen EOS or 2015 Infiniti Q60 and drop the top during a period when it isn’t raining or snowing because only then can you learn what it means to drive.

Although the EOS and Q60 folding hardtop convertibles have both been on the market for some time and are nearing the end of their production runs, this isn’t to say that they can’t wow your inner driver plus the neighbors as well. Sure Infiniti and Volkswagen are brands that allegedly attract different buyers but our admittedly fully equipped EOS was priced just $5,000 under the starting price for the Q60 at just a bit over $43,000. But regardless of cost both the EOS and Q60 convertible are about experiencing your drive and making a personal style statement about yourself. And at those prices you no doubt deserve to pat yourself on the back from your success.

Also, we love both of these rides for being luxurious, weather proof and also thanks to their canine sized back seats—Roxy our canine road tester got her first taste of al fresco motoring after we buckled her into her safety harness. She does get tempted to chase squirrels which would be bad with the top down. And never allow your dog to sit in the front seat as the airbag going off could easily kill them. Suffice it to say, Roxy approved of both vehicles equally. 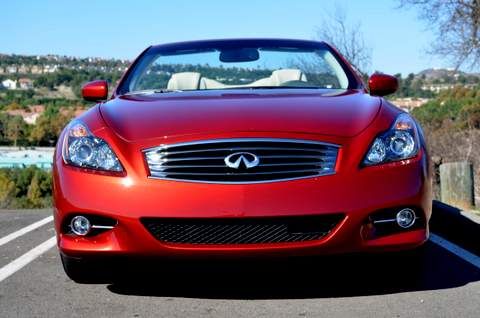 We would have to say personally we think the Q60 looks cooler top up or down but this is totally a subjective call. With the touch of a center console mounted button the top does a seemingly impossible feat of folding metal origami and the top disappears into the trunk. The perfectly orchestrated movement of the various top pieces is of such beauty you half expect a philharmonic symphony to be playing Beethoven’s 9th in the background. Live.

But if it were our call, we’d have this to say about the Q60 as opposed to the less expressive and slightly more inoffensive EOS. To our eyes the Q60 is without question the best looking folding hardtop convertible on the market today. It looks like a stylish coupe with the top up and with the top down it doesn’t suffer that “too much junk in the trunk” look of many of its competitors. They know who they are and actually we weren’t referring to the EOS but rather some BMW and Lexus models. This is one sexy drop top that will make you look and feel sexier yourself. The EOS just looks nice. (Winner: 2015 Infiniti Q60 Convertible) 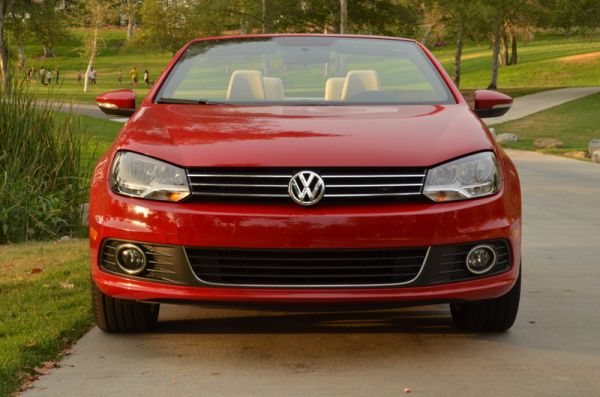 Both of these very advanced folding hardtop convertibles boasted very luxurious feeling interiors with all of the features and goodies one would expect at price ranging from $45,000 to around $60,000 for a loaded Q60. One feature only the Volkswagen boasted was the inclusion of a full length panoramic sunroof above your heads so you could enjoy the view above without having to deal with the cold wind rushing in. Both models came with fixable wind deflecting buffers which we usually left in their small storage cubbies since we don’t get it when people buy convertibles but don’t want their hair messed up.

Although our test EOS came with a very handsome Cornsilk beige leather interior, buyers can order an EOS executive with a very handsome deep red leather interior that we think would look amazing in either the dark gray or silver exterior. Just an opinion. We also liked the in-dash navigation’s 30GB of song storage capability as well as the inclusion of Volkswagen’s updated top of the line Dynaudio system with 10-speakers and 600-watt amplifier capability. Sound quality was easy to adjust via the center screen to personal taste and never mistook being loud for sounding good. Unfortunately near full volume some sonic interference was noticeable but when used at 8/10’s it is a good sound system. 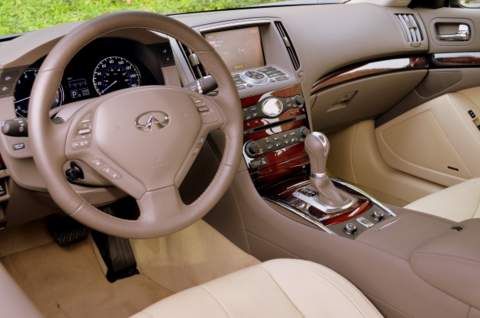 Speaking of stellar audio, our test Infiniti Q60 was equipped with the Premium Package which features one of the best Bose audio integrations that we have ever encountered in a new luxury car. The sound is crisp and there are even speakers integrated into the headrests so you can hear your favorite Mary J. Blige at 70 miles per hour on an L.A. freeway. Pretty impressive stuff.

Further techno-wonders included the absolutely seamless iPod integration that is instantaneous and suffers no sound degradation and the in-dash navigation is very intuitive with an easy to use circular knob on the dash to set your destination. On one drive through the poorly marked streets of Long Beach, California when we were trying to find the freeway and not the ocean, the Infiniti’s navigation system pointed us in the right direction.

The leather lined interior of the 2015 Infiniti Q60 drop top is plush and the rear seats actually look like they could carry two humans in a tolerable state of comfort but not really unless these people have very short legs. You will probably find yourself using the two seats at the de-facto trunk as we doubt you will ever want to put the top up in this sexy convertible.

Still, no matter how much we love the Q60 we can’t get past how much we would have to spend on options to equip it like for like with the EOS Executive model. $43,000 as opposed to nearly $60,000 is a big bump in payments. (Winner: 2015 Volkswagen EOS) 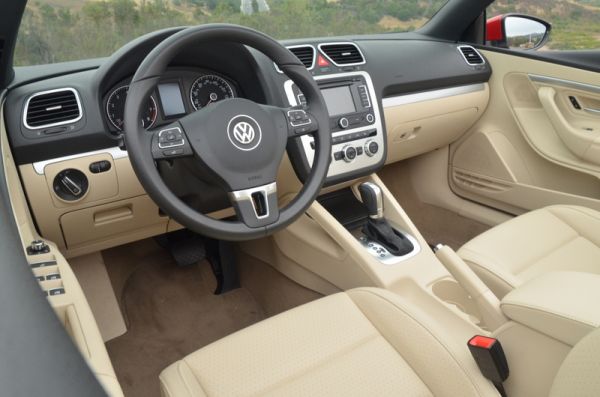 The Infiniti Q60 and its screamingly powerful 3.7 liter 325 horsepower V6 is like a feat of engineering prowess built merely to induce a perma-grin on the face of the driver. You just can’t get behind the wheel of this coupe/convertible and not feel better about the state of the world. That is, unless, you are just a total grump. The only thing possibly bringing you down might be the fact that with the top down the trunk can hold pretty much one box of Kleenex and that’s it.

With their respective tops down, neither of these two doors is the last word in structural rigidity so to call them true sports cars would be a stretch. But taken side by side it is definitely the Q60 with its sharper steering and buttoned down handling around tight corners that gives it a definite sporty edge over the EOS and its relaxed cruiser attitude. In the EOS you enjoy the drive thanks to the 2.0 liter turbocharged 4-cylinder and expertly calibrated 6-speed automatic which allow impressive acceleration but it never goads you to drive in a manner unbecoming a good citizen. 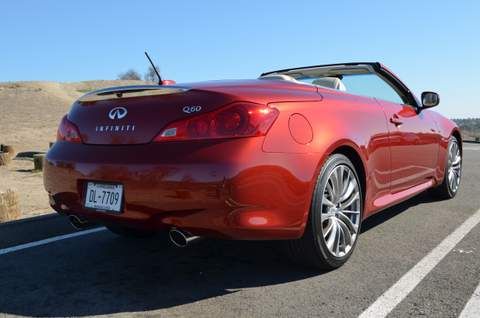 In a perfect world we would say spend the extra money on the Q60 but even when buying a less than practical, fun car you should try and consider what you really can afford. And owning a 2015 Volkswagen EOS would be no hardship. It’s just owning an Infiniti Q60 would be a life changing experience.

All Photos by Jon Gala 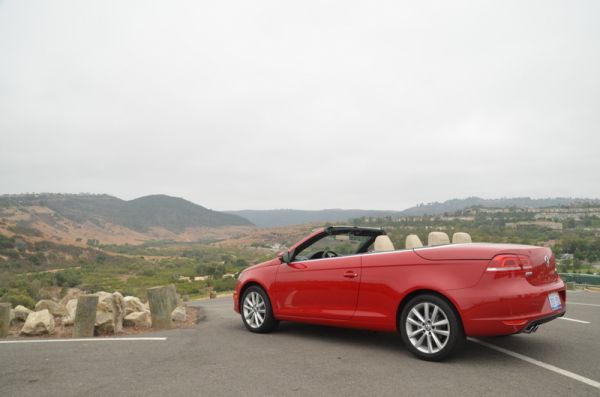