“Who said the ladies couldn’t make it, you must be blind
If you don’t believe, well here, listen to this rhyme
Ladies first, there’s no time to rehearse
I’m divine and my mind expands throughout the universe.”

Women had always been faced with inequality in many places. When it comes to automobiles, gender inequality rears its head many times over. They get taken advantage of at the service department. They are assumed to be more impulse buyers by car sales personnel – all of the stereotypes that are named have been true for a very long time.

Now, women are smarter about the automobile. Not only do they represent the larger consumer demographic, but they are armed with more knowledge than before when making car buying decisions. They also know what might be happening underneath the hood than ever before.

The obvious advances have been in more visible places. A woman is running General Motors – Mary Barra. You are seeing more women in engineering, design, finance and communications positions throughout the industry. Women are also growing in the automotive retail and post-sales support sectors. Most importantly, women are growing in the automotive media corps, led by the legendary Jean Jennings – and our own MaryAnne Wendt!

These are all great, but what about the enthusiast scene? Where are the women in a male-dominant scene where it’s all about the modifications, the track experience and the image?

Here in Minnesota, there is an answer. There is now an all-women car group on the scene – Eminent Fidelity.

On the first weekend of May – a huge car weekend here in the Twin Cities – I had the chance to see their first “public” event where several clubs and local enthusiasts came to show support for the women of Eminent Fidelity. There was no shortage of great cars by club members, including two camouflaged vehicles – a Mitsubishi Lancer Evolution and a first-generation Ford Fusion. There was a deep green third-generation Acura Integra with orange wheels belonging to another member. Another member had a new NISMO 370Z, while one had a yellow 2000s Chevrolet Cavalier coupe with a carbon fiber hood. This is just scratching the surface of these women roll in.

During this meet, I had the chance to talk to Kayla Garza, the founder of Eminent Fidelity, to get the back story and the motivation for creating this car group in the Twin Cities. “I’ve been an automotive enthusiast for a long time now,” said Garza, “it stated when I was very, very young. It’s grown mostly since I was 16. I actually did go to school for automotive. I did that for a couple of years and I got my own project to work on.”

“I noticed that there was a little bit of a lack of female enthusiasts in the Twin Cities area,” Garza explains, “so I was trying to get a group to get them all together. I did start the group here in August 2014. It didn’t take too much because we were going into the winter months. About January or February this year, it has really taken off.”

At current count, Eminent Fidelity has 231 female members, with about 500+ “likes,” rather “supporters/followers,” on their Facebook page. Garza stated that their members are joining up from across the U.S. “We’re growing every day,” said Garza, “we have more people, especially with meets like this we advertise. We are able to recruit more girls and spread the word to everybody.”

“I noticed there was a lot of discrimination on females. I have been on a number of forums and Facebook pages; car meets and anything like that. The thing get all have in common is that we get asked ‘is that was your boyfriend’s car?’ ‘Did your boyfriend do that for you?’ And stuff like that. I take pride in doing 90%, maybe more of my work. Anything I don’t know how to do I find out how to do it, and I am able to teach other people. We try to join up with the other men that support us. And, we don’t take it too much to heart whenever they are against it, but hopefully we will win their hearts over.”

While researching other female car groups, Garza ran into Import Chicks, a large car group based in the Pacific Northwest. Garza explains, “We reached out to them to get guidance on how to do things and to make sure to let them know that we support them and we like their support.” In all, there are currently more than handful of women’s car clubs across the country – representing various genres of automotive enthusiasm.

“One of the main things that we really like to do starting in a couple of months is to do clinics. And, I like to get a small group of girls – or a large group – and we have a girl in our group that actually does have a lift in her garage so we’re able to bring in cars that need repairs – just minor repairs – and we can teach young girls or older women, anyone…anyone who wants to learn, I am willing to teach. Just to kind of make women a little more independent, have higher self-esteem [so] they can work on their own stuff. Just to get the word out there and help educate.” 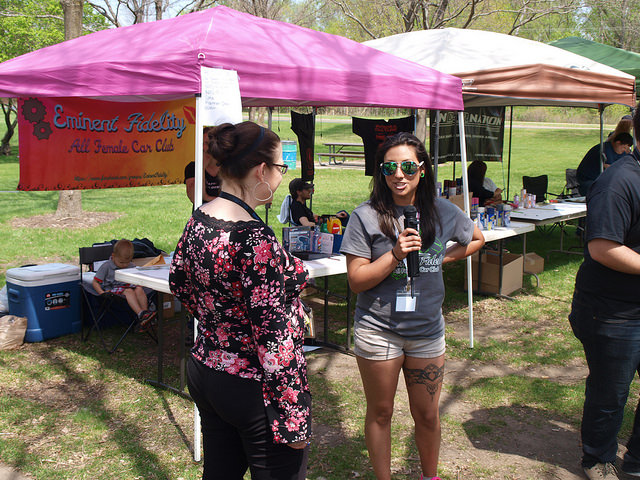 Eminent Fidelity has set up a forum at eminent-fidelity.com to be a space for women enthusiasts to share information and organize events. They also have a strong social media presence through Facebook, Instagram among other channels. The forum has a section for all 50 states, as Garza has a vision to have a more national presence on the car scene beyond Minnesota.