Yes, Why This Ride? reviewed the Volkswagen Jetta before. Why is this review any different than the turbocharged gasoline SE model James Hamel drove a year ago?

The first clue comes from what is underneath the hood. The SE model I drove for this update on our coverage of the Volkswagen Jetta has something that has attracted buyers to this spacious compact sedan – the TDI turbocharged diesel engine. Across all 50 states, the TDI is the more desirable engine – next to the 2.0liter turbocharged gasoline engine powering the GLI.

Why is the TDI such a big deal? When consumers were fearful of high fuel prices, they were finding alternatives. Sure, Hybrids offered sustainability with the electric motor and battery pack, but you poured gasoline to power that other engine next to the electric one. You got good fuel economy, which can be sort of hit and miss. All electric vehicles and other plug-in electric priority vehicles got plenty of attention. Unless you can afford a Tesla to use their Supercharger network, not everyone provides full charging support, if you wish to take your EV across country.

With a diesel, consider long-term maintenance expenditures. In ten or so years, the battery pack in a hybrid might get replaced. That is a not a cheap job. Diesel maintenance is far less expensive and impacting on a car.

Not to mention, you get that diesel power. Enough said.

And, didn’t I already review a TDI-powered Volkswagen just a month or so ago? That was the Passat. This is the Jetta. Moving on…

With both the Passat and Jetta, these vehicles were tested in one of America’s harshest climates – Minnesota. You heard that diesel fuel might gel up and would need additives to keep going. Or, that they do not start well in the cold. Let me assure you that both never happened. Why? Because the fuel has improved – somewhat. Not to mention that modern cars are now better at dealing with the cold. 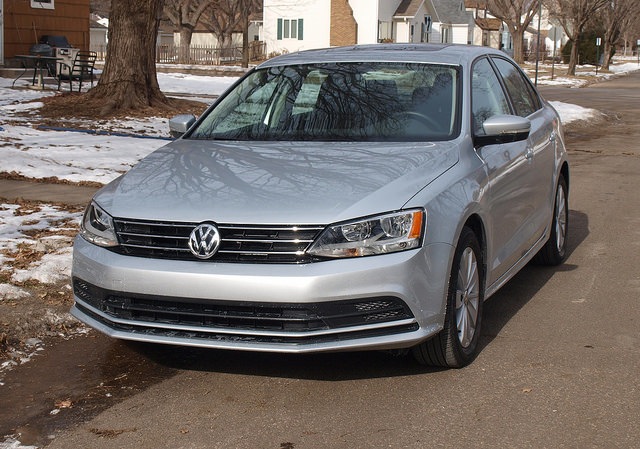 At first glance, there is no mistaking its is a Volkswagen. The new model year brought some visual updates that is in line with current design elements. The grille is larger and more integrative with the headlamp units. The trunk is all new with a bit of an Audi scallop framing a new set of taillights. Yet, one would look at the Jetta and dismiss it as being anonymous, nondescript and simply unexciting. Further examination will show that certain lines and angles give more away as to VW’s distinctiveness when you compare it to the competition.

Yet, the Jetta just looks middle-of-the-road. It is rather restrained. This is probably what VW intentioned – looks are distinguishable, but not overly designed.

When you step inside the Jetta, you would not exactly use the word “austere” to describe the cabin. It is almost an all-black interior, from the leatherette seating to the instrument panel. The only breakup in color is in the roof liner – a light gray contrast against everything below the window line. Piano black surfaces now adorn this middle-grade SE model, along with a brand new steering wheel now shared with the seventh-generation Golf lineup.

Seating-wise, the black leatherette upholstery in this SE model is comfortable, while the form is supportive. However, as a large person, I felt semi-comfortable behind the wheel. The seat had to be positioned low to clear the sunroof and far to let me legs work without strain, If you are the average human being, four to five of you would find comfort all around. It is a decent sized cabin for the class. Trunk space is huge – 15.7 cubic feet – swallowing enough luggage for a weekend for four.

Instrumentation is typical Volkswagen with white-on-black dials for the speedometer and tachometer. However, there is a small LCD screen in-between the two large dials that feature a fuel gauge, a clock and an odometer/trip odometer. But, that is about it. Because of the new steering wheel, switches have improved for audio functions, cruise control and the information screen. The stalks have revised, though they remain the same design as ever. The center stack features the infotainment system and the climate control switches. 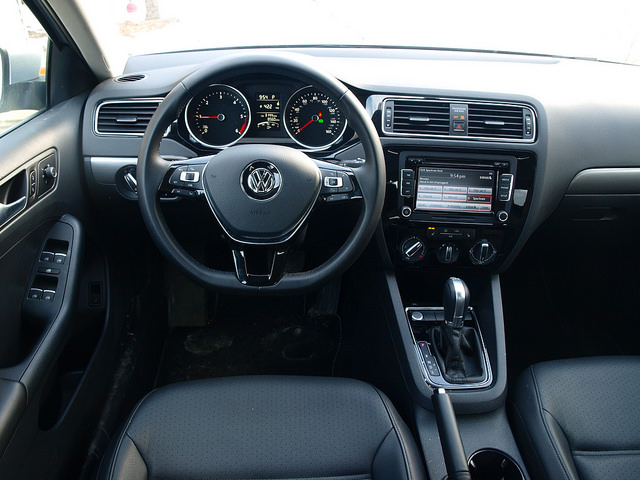 You get a touch screen for the infotainment system – one that has been superseded in the Golf Family. It still works for this purpose. Great sound is filtered through six speakers around the cabin – as good as the Fender Premium audio system. This SE came with Bluetooth connectivity with better phone pairing than before.

If you are in the market for a Jetta SE or SEL, take my advice and get the TDI engine. It is the best engine available for this car – save for the 2.0liter TSI gas engine for the GLI. The diesel-fueled 2.0liter engine has 150 horsepower and 236 pound-feet of torque on tap. Connected to the DSG gearbox, it is a very motivated driveline. Power is sent down to the front wheels for improved traction than before.

There is no question how the Jetta drives. “It drives like a Volkswagen.” What exactly does that mean? Put it on dry tarmac and it will exhibit a bit of sport – a firm, but balanced chassis, the lack of body roll in the corners, decent steering and solid brake action. It just seems that the Jetta loves to run and will show its moves when prompted.

Even in the cold of winter, the TDI did not disappoint. In fact, it is a real winner – especially at the diesel pump. The Jetta TDI turned a fuel economy average of 44.4MPG.

If you are shopping for a Jetta, you will find it a bargain to begin with. A basic S sedan with a 2.0liter, 115-horsepower engine and a manual gearbox starts with a base price of $17,325. Our TDI SE tester came with a sticker price of $25,995. Now, that is a bargain – considering that diesel engined cars are not necessarily considered “affordable.” 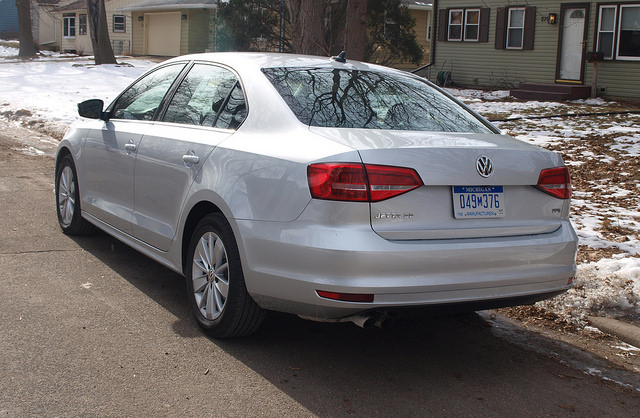 – How does one sum up the sixth generation Volkswagen Jetta? It is actually a good car that gets ignored by the mainstream. While some reputation management is needed, my TDI SE example was very good in terms of being a decently equipped compact sedan that just happen to run on diesel fuel.

– A tip to the consumer: If you have to get a Jetta, get one with the TDI. It is not just about fuel economy, but rather power delivery when it is needed. Whether you choose the six-speed manual or the DSG, the TDI will reward you on the highway in many different ways.