Volkswagen hatchbacks are known for delivering a vibrantly entertaining compact of German driving character while providing cargo room of midsize sedans. VW had been plagued by long-term quality issues, now that’s past. This year’s new, next-generation VW Golf is genuinely elevated in mechanicals, materials and assembly quality with increased lasting value. That is why I chose this ride. 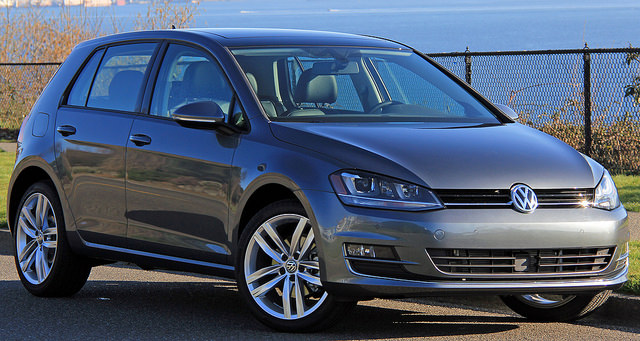 Entering into its seventh generation the VW Golf receives a major overhaul. It may be hard to notice; Golf is completely new. The design language is so pure and true to its 40 year Italdesign heritage. This Golf Mk VII major updates include a new platform, styling, power trains and a model line expansion.

This Golf presents the broadest array of power. Power trains ranging from electric, diesel, gasoline and high-performance gasoline units. On top are many choices of body styles between the traditional two-door or four-door hatchbacks, or the all-new longer SportWagen and just released SportWagen Alltrack.

VW continues to market the standard Golf as a front engine, front-wheel drive five-passenger compact hatchback. Yet it’s longer, wider and lower than the last Golf translating into a lower center of gravity. At a length of 167.5 inches it’s one of the shortest versus the other compact hatchbacks like the Mazda3 or Ford Focus. 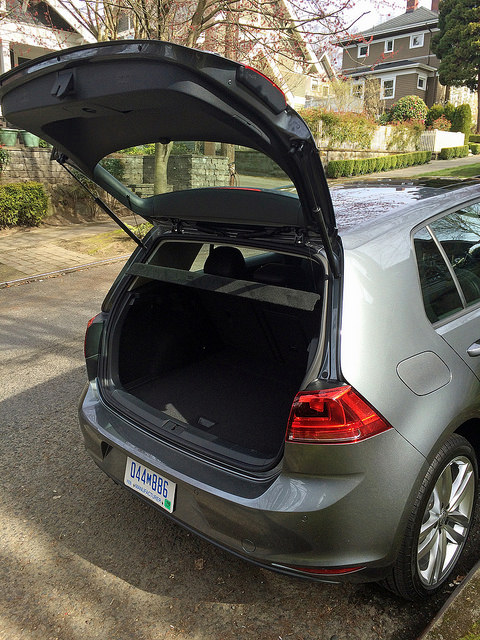 The exterior styling is modestly more pronounced from the last Golf. Non-threatening while still representing an established edgy appeal. The sharper bold angles of the headlights, sloping bends of the hood and shoulder side line sweeping rearward defines a new mature look. Looking at the Golf from a three-quarter angle first thing to catch my eyes was the new optional HID headlights. Brilliantly lit white LED Daytime Running Lights in a U shape contour the low beam on our 2015 VW Golf TSI SEL four-door test car with Platinum Gray Metallic exterior paint. 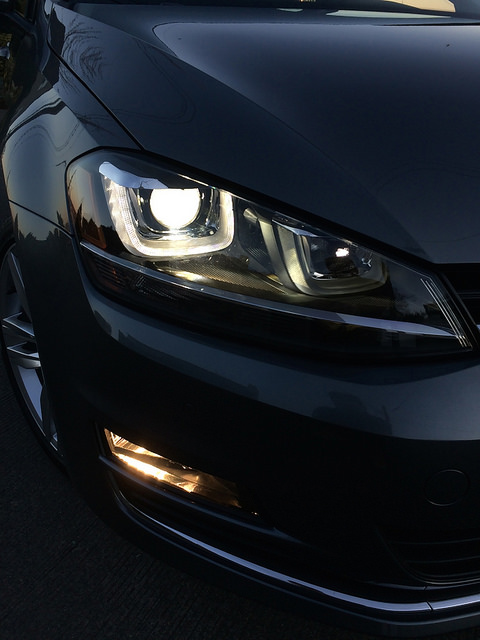 My attention was then led down to the twin-spoke 18 inch silver alloy colored wheel set mated with ultra-gripping all-season tires by Pirelli called Cinuratos P7. Then the design led my eyes up the creased wide arching fender to the laid back raked A-pillar; smoother and slanted more due to the new chassis design. The passenger cabin has been extended rearward a little over an inch from the previous generation. You can feel how luxurious being set back is. As my eyes wrap past the roofline and drop down over the hatch rear C-pillar I’m reminded of the Golf Mk IV and its beautifully defined boomerang shaped C-pillar. It pays homage well plus takes the design in a new direction.

Under the new skin VW builds this Golf line on their new standardized MQB platform. By standardizing one highly refined platform to build many vehicles, manufacturers can focus more on defining each unique model’s character. From the start I could feel the new unit body increased strength, stiffness and refinement over the previous model.

Road events like Seattle’s steep alley entrances and driveways really showed the platforms true colors. Not twisting and squeaking loudly articulating over bumps but instead a tight, fit and quiet. It’s so nice to drive a well-sculpted stock car without adding extra bracing and reinforcements to get that unit body feel when maneuvering through corners.

It is a pleasant surprise to drive the new turbocharged 1.8 liter inline four-cylinder gasoline engine powering all Golf TSI models. Our SEL four-door was perfectly geared for the Seattle city roads. A solid 200 lb-ft of torque erupts as low as 1600 RPM pulling the Golf away as the 170 HP rushes to the rescue to add speed reaching 60 MPH in just below seven seconds.  The thrusting torque curve from the German engineered Golf TSI definitely has enough footing to rip past unsuspecting sports cars. 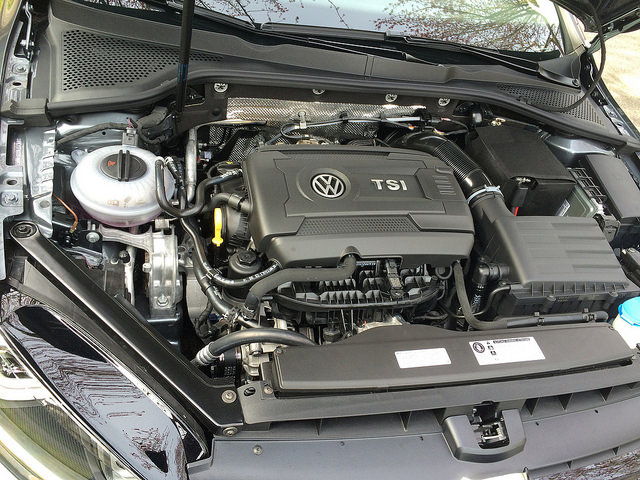 Internal combustion features like direct injection and hydraulic valve lifters with variable valve timing help the TSI Golf achieve a valuable MPG rating of 25 city, 36 highway. I felt I could eek out more miles not spinning up the turbo as much upping my mileage past the 475 mile range. Having said that when I downshifted for power through the wheel-mounted paddles shifters the Tiptronic 6-speed automatic transmission operated with superb response engaging within milliseconds for more get-up and go. It gave me every gear when I asked for it, up and down through the gearbox.

Unlike the more fuel-efficient variants that are built with a solid acting rear axle the gasoline TSI model we’re testing handles the road with fully independent suspension at all four corners. Mastering the front end is a typical strut type but built robustly and at the rear is a four-point multi-link which truly is the spotlight.

I felt like with such a stiff body the suspension had to be dialed down to give it a softer everyday “people’s car” feel. VW has done a perfect job with the compromise. Not too much lean through a chicane but just enough to forecast weight shifting, you might be breaking the limits of traction soon. A nice feature new to the Golf line is the XDS cross differential system that brakes the inside wheel during turns to keep you in line when the traction system senses slippage.

Safety starts with your confidence behind the wheel and I felt well in control even above highway speeds. Feedback from the Servotronic steering system is consistently smooth with crisply direct turn in feel. The majority of the imperfections of the road are muted for a soothing feel through the meaty three-spoke steering wheel not alerting the driver and tiring the wrists. 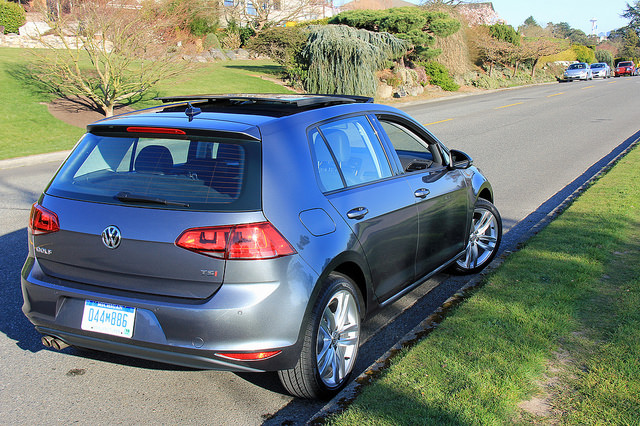 I could place it through a turn like I owned it for the past 10 years. I was able to feel vaguely when I was slipping then gripping but I imagine a large amount of drivers will not notice that the traction control and electronic stability control working hard to find contact.  Is it a luxury or an annoyance? I found it a luxury most of the time.

The Golf is an IIHS Top Safety pick this year and with standard six airbags in case of any type of collision you’ll be able to walk away. More standard safety features include Automatic Post Collision Braking System, rearview camera, automatically illuminating Cornering-Light and VW Car-Net services. Equipped on our top SEL trim line is the optional Forward Collision Warning and fast acting Park Distance Control which grabs objects faster than most systems on the market. Fast acting sensors are a testament to VW’s campaign to better transportation safety, saving more lives of humans and animals. 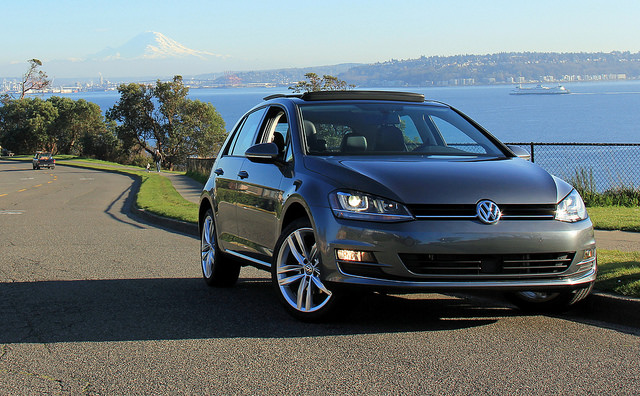 The most appealing reason to choose the top of the line SEL model for the Golf is to have the 12-way power adjustable sport bucket V-tex leatherette driver’s seat. Although the material isn’t the highest quality, the structure of the seat sure is. It was pure bliss being wrapped tight by those high bolsters while tackling traffic. The passenger receives the same seat just partial power 8-way adjustable. 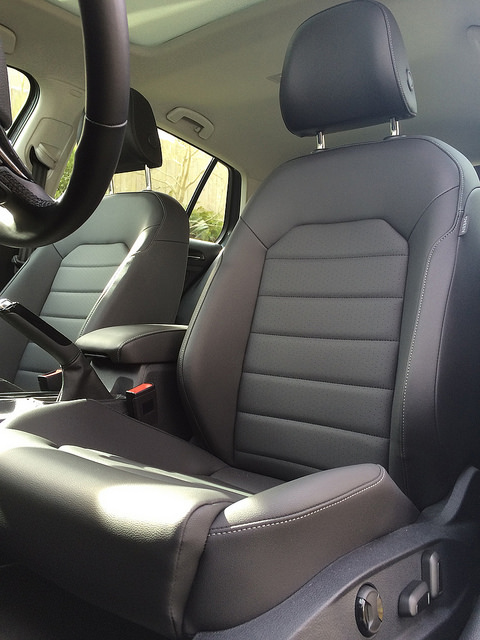 Now with 93.5 cubic feet of cabin space the interior feels even larger. The most noticeable is the wider shoulder space. This is quite lovely for me and my big American friends. Now the 400-watt Fender audio system has a larger cabin to blast the bass in or easily stuff your bicycle. My 56cm size road bike fit like a charm with its front wheel detached. The panoramic sunroof enhanced the larger greenhouse as well lightening up the closed boxed cabin. It was refreshing. 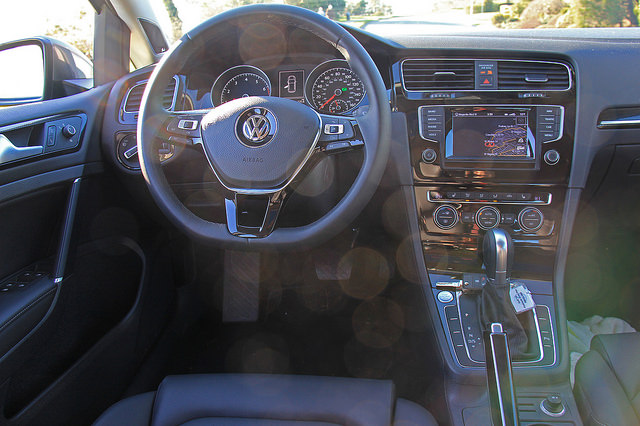 Now standard infotainment on all Golf models is a 5.8 inch touch screen with available navigation and standard with Bluetooth, MDI, USB connectivity. Its BT phone pairing is fast and easy for first timers and has great compartments to hold even more electronics besides your most important mobile device. In the highly readable black with white lettering instrument cluster there is a LCD screen placed in between the meters for remote controlling or vehicle data readouts. 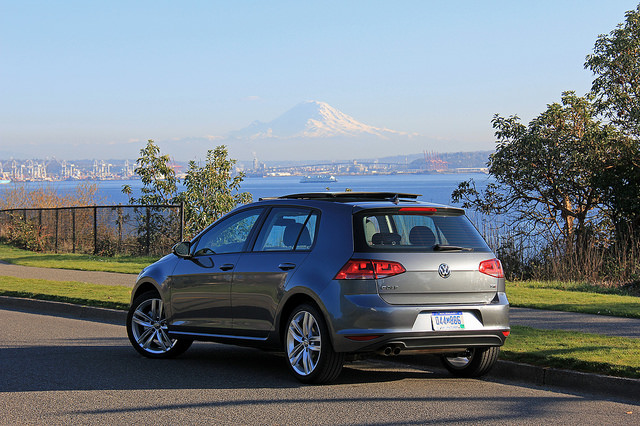