So, you got a family. There’s plenty of folks like you. Your friends, too. They are also growing through their teenage years. Three-row crossovers – not all of them are equal and accommodating.

Your dilemma is very common. However, you already nixed the minivan because you want that eight-inch ground clearance for taking on difficult roads. Yet, you want space for people in all three rows.

Oh, what will you do? 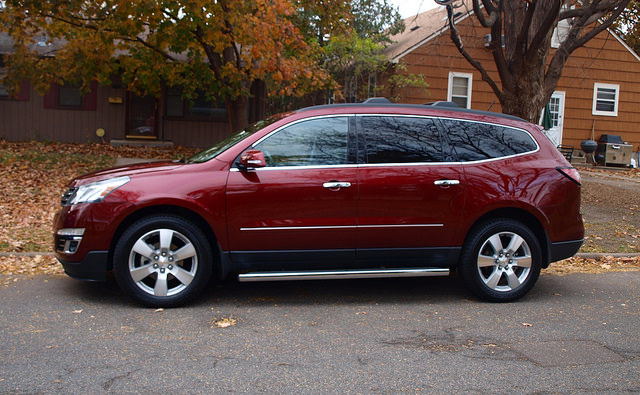 You may have considered the Chevrolet Traverse. It is a three-row crossover that is known for having the largest interior volume in its class and the most third row leg room amongst mid-sized crossover/SUVs. Months after these commercials aired, we wanted to bring one in for review to see whether the Traverse is indeed the choice of our families.

The Traverse is part of the Lambda family of General Motors crossovers that replaced three different platforms – a body-on-frame mid-sized SUV (TrailBlazer), a minivan (Venture) and a two-row crossover (Buick Rendezvous). Chevrolet’s version features unique styling on the same platform its shares with the Buick Enclave and GMC Acadia, some of which was revised for 2014.

It is bold statement for Chevrolet – in design. The front end is influenced by the Camaro, which is also seen in the latest Impala. Most of the body has been around since 2009 with its huge glass area, large doors, thick skin and wide stance. Rear tail lamps were part of the 2014 revision giving the Traverse an upmarket feel for the brand.

Our 2015 LTZ tester added a few options to enhance the look. Our model came with running boards, a feature not seen a lot on Traverses and its brethren. There is a roof rack and dual moonroofs, along with 20-inch aluminum wheels shod with Bridgestone Dueler tires.

As mentioned before, the Traverse is known for its huge interior volume – 116.3 cubic feet, to be exact. It appears to be minivan-like, except for the shorter roof. Third row passengers would have to negotiate that roofline to get back there, but adults can sit there without feeling cramped. In this model, the second row seats are “captain’s chairs,” meaning they lack a middle seat – and a console. However, they are adjustable for rake, recline and are easily pushed away for third row access. Folding these seats for extra cargo is also rather easy.

Front seat comfort is not bad. One complaint is that tall drivers would have to adjust to the instrument panel, as the tilt wheel only goes to a certain height that would require the seat to be lowered for competent use. The LTZ offers power adjustments for rake, recline, height and lumbar with two memory settings. The center console is useful with plenty of storage and a sliding armrest.

Up front is an instrument panel that is a hodgepodge of generations of GM switchgear and readouts. It all seems logical, especially when you have a battery charge gauge in the instrument panel and large buttons for audio functions and cruise control on the steering wheel. For tall drivers the center screen for Chevrolet’s MyLink infotainment system seems a bit low, but once it is set up, the steering wheel switches will make things easier.

The MyLink infotainment system offers plenty of listening options from SiriusXM to Bluetooth connectivity and app use – such as Pandora. Bose provides a lonely sound inside the Traverse LTZ with ten speakers positioned all around the cabin.

The Traverse is powered by a 3.6liter V6. The top of the line LTZ model gets 288 horsepower on tap, because of its dual exhaust system, while other models make do with 281 horses. A six-speed automatic transmission is available to feed this power to all four wheels, as in our tester. Considering that there is over 4,800 pounds of crossover to pull, the V6 does a good job in doing so. However, there were some concerns about the transmission, especially when there were lags in-between shifts after doing lane changes or going up ramps. 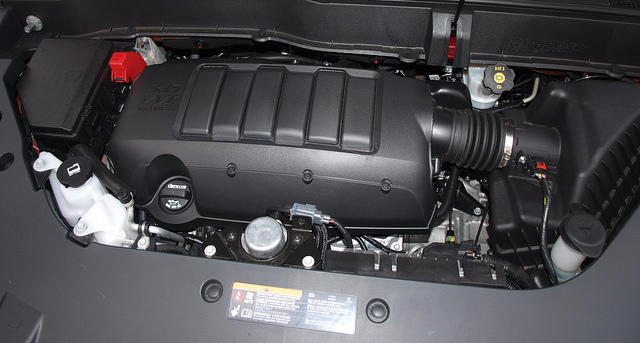 Ride quality is smooth. It is good enough to carry seven people on board without a problem. Bumps are taken just fine. Handling is soft, however. Expect some roll and lean through the corners.

Turning the Traverse requires using the big steering wheel. In a way, action to the wheel is OK, perhaps a bit vague. The turning radius is quite large for this vehicle. However, braking is good with solid stops I n both normal and panic situations.

Normally, a Lambda crossover driven for review by us would yield a fuel consumption average below that advertised figure of 19 MPG. To our surprise, our average came to 21.8MPG. 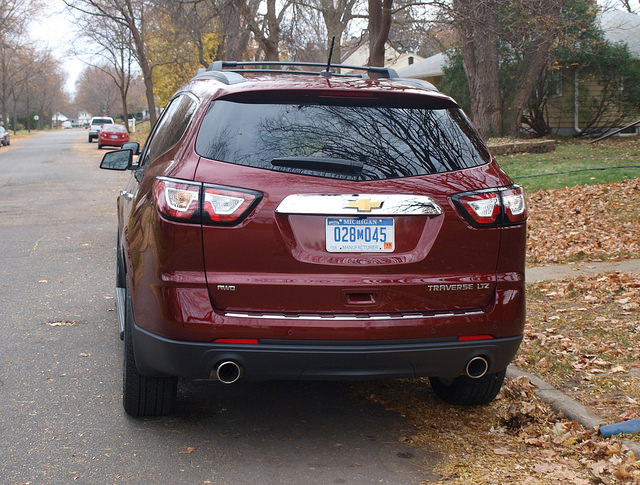 – In our review of the GMC Yukon, we proclaimed its “large and in charge” status above all SUV/crossover offerings from GM. For the Traverse, there is one fact that needs to be repeated: 116.3 cubic feet. To reiterate, mid-sized, three-row crossovers skimp on third row room. Not the Traverse (or any of the other Lambda crossovers). You can have a growing family of more than two children and have them spread out a bit more than they would in any other three-row contraption.

– The Traverse might not be the best looking model in the class – though it is handsome in its own right. It might not as capable as others off road or have the extra interior height of a minivan. If you just want a thud-solid crossover to get through the winter, carry children to school, commute to work and go somewhere on the weekends, the Chevrolet Traverse might be one worth considering. If you are skipping the Traverse, try your luck getting in the third row…or, securing a child…in one of its competitors. It might be the best selling point for the Traverse.