According to Mitsubishi’s own advertising, apparently restraint is not the 2014 Mitsubishi Lancer Evolution GSR’s strong suit. You don’t say? We would have never guessed from the huge whale tail spoiler on the trunk or from the frenzied howl of the standard 2.0 liter turbocharged 291 horsepower/300 lb. feet of torque four cylinder engine as we neared the redline one more time. This car is addictively fast and could prove hazardous to your driver’s license.

From the outside, the EVO is clearly based on far more hum-drum versions of the Lancer compact albeit looking as though it was recently attacked by a mob of zombie tuners. But thanks to things like our tester’s optional leather clad Recaro seats which hug you closer than your Aunt Bertha at a family reunion, you will always feel secure driving the 2014 Mitsubishi Lancer Evolution. Sure, the interior design is rather dated but the automatic climate control uses three easy to use knobs and everything feels solidly built. Just don’t expect an array of soft touch plastic everywhere. 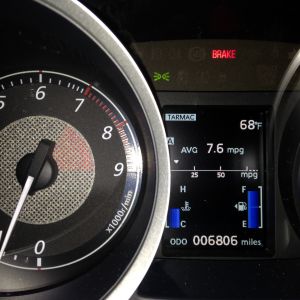 The 2014 Mitsubishi Lancer EVO GSR is rated by the EPA at 17 city/23 highway which is possible with a responsible right foot. During a week with us we could manage around 19-20 miles per gallon but as soon as we chose to drive like hooligans (hard not to do in this car) it went as low as 7.6 miles per gallon. We blame ourselves for this, of course. But do know the Lancer EVO GSR runs on premium unleaded and has a pretty tiny 6.9 cubic foot trunk. The gas tank is more generous offering 14.5 gallons.

Base price for the 2014 Mitsubishi Lancer GSR is $34,995 and it comes with a 5-speed manual transmission (the only gearbox offered with the GSR), full time adjustable all-wheel drive (more on that), automatic climate control, Recaro sport seats, power windows, locks and mirrors, Brembo brakes, halogen headlamps, Enkei alloy wheels, a huge rear spoiler visible from space, Bluetooth, USB/i-Pod integration with the 6-speaker AM/FM/CD audio system, a 6.1 inch  touch screen display and Sirius/XM radio. The powertrain warranty on the EVO is 5 years/60,000 miles instead of 10 years/100,000 as with every other Mitsubishi product so keep that in mind.

For $3800 we added the Sunroof and Leather Package which covers the Recaro sport seats in fine leather, improves the weak standard audio system by replacing it with a Rockford/Fosgate 710-watt 9-speaker surround sound system with trunk mounted subwoofer and lets the sun shine through a power glass moonroof. In addition, this package includes HID (High Intensity Discharge) headlamps, keyless entry and start, heated front seats and what Mitsubishi calls “Enhanced Sound Deadening Equipment.” Whatever that means. This car can still get loud. Final tally came to $39,605 with only the Mitsubishi $23,75 in dash navigation system missing from the mix. At that price we say buy an aftermarket unit or use your smart phone.

After driving the 2014 Mitsubishi Lancer EVO GSR your expectations involving performance from any car you drive from that point on will be colored due to this unassuming compact sedan’s inexplicable ability to defy the rules of space, time and quantum physics. That may all seem like severe overstatements but if you want a car that can handle corners as speeds vehicles costing three times as much cannot, then the 2014 Mitsubishi Lancer EVO GSR might be a perfect fit. It is insanely quick, can tenaciously hold onto any surface no matter how slick and near redline the engine sounds like a bunch of angry hornets live under the hood.

The ride is quite firm so on uneven pavement it could become tiresome so this might not make the best daily commuter if you travel 200 miles roundtrip. But then the Recaro seats are some of the most comfortable we have tried and while it is only a five speed, the slightly notchy gearlever was a pleasure to use and the clutch never felt too heavy even in traffic. But honestly, the 2014 Mitsubishi Lancer EVO is happiest out on a winding, twisty road with epic sweepers where we promise it will make you feel like a racing hero. In those conditions, the EVO GSR flatters the driver.

Our favorite part of the 2014 Mitsubishi Lancer EVO GSR, however, has to be its perfectly weighted and calibrated steering system which we swear has powers of telepathy. It may feel a touch heavy at first but it communicates everything that’s going on to the driver and really always makes you feel in control. We also love Mitsubishi’s Super All-Wheel Drive Control with three settings for Sand, Snow and Normal and Active Yaw Control which allows torque to be transferred individually to each wheel as needed.

WHY we think you should pick THIS 2014 Mitsubishi Lancer Evolution GSR as your next RIDE!

* It’s insanely fast
* It steers with more precision and feel than any car we’ve tested
* For the performance it’s relatively affordable
* It has most of the practicality of your average compact sedan
* The Recaro Sport seats are so comfortable you may decide to live in the car.