It seems that Honda pulls something magical out of the ether for its iconic Civic compact each model year ever since it was stung by criticism that a 2012 redesign was disappointing due to insufficient soft touch plastics on the dash and the fact that the Hyundai Elantra got 1 mile per gallon more on the highway EPA scale. Well, even after consumers and auto journalists learned a 1 mile per gallon difference from the EPA is just a mathematical anomaly, Honda still took it upon itself to please faithful buyers for the 2013 model year. This despite it being the best-selling compact car in the country.

They not only seriously dressed up the interior materials but also went ahead improving the ride and handling via thorough suspension tuning, made the interior quieter with sound deadening measures and improved the steering feel by remounting the rack. Lastly, Honda managed to score a coveted “Top Safety Pick Plus” rating from the IIHS (Insurance Institute for Highway Safety) due to the addition of almost 300 pounds of structural enhancements and strengthening. The only other compact car to fare as well in the IIHS testing is the 2014 Mazda3.

Now for 2014 Honda set its sights mainly on fine tuning its halo performance Civic known as the Si. Our “House of ill-Repute Red” (not the real name) Civic Si coupe we tested looked ferocious thanks to a menacing lower valance under the headlamps, a huge rear spoiler, revised tail lamps and frankly it looks like it’s speeding when parked. Changes to the exhaust freed up more power which now amounts to 205 horsepower/174 lb. feet of torque 2.4 liter VTEC 4-cylinder mated to the sweetest shifting 6-speed manual gearbox this side of heaven.

Admittedly, last year’s Si wasn’t quite the razor sharp driving machine it should have been so Honda went to work on the suspension with new spring rates, revised damper settings and a stiffer anti-roll bar. Add in our tester’s optional $200 set of summer tires which were sticky as could be and it’s easy to see why photographer Jon Gala referred to the 2014 Honda Civic Si as the “perfect weekend autocross track toy that you could still commute in during the week.

In addition, the interior of the Si gets new red inserts in the front and rear seats for a sporty touch as well as Honda’s excellent touch screen audio/infotainment system which still sadly lacks a volume knob. It uses a sliding scale that is nearly impossible to use but thankfully you can adjust volume on the steering wheel. Or don’t turn down the 360-watt 7-speaker audio system with subwoofer because frankly for this price point it is quite impressive in terms of clarity. 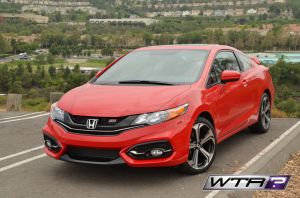 What’s it Like to Drive the 2014 Honda Civic Si as your Daily Driver?

You might assume that since the 2014 Honda Civic Si is one of the few affordable sporty compacts on the market today that doesn’t rely on the easy power given by turbocharging that it is an exhausting car to drive. That simply isn’t true as in fact it’s the opposite. Sure, the 2.4 205 horsepower/174 lb. feet of torque 4-cylinder thrives on revs and can howl like a banshee at redline but under normal driving conditions the motor is the picture of civility and easily accessed power. This motor doesn’t feel like it has an “ON” and “OFF” switch. It just goes a little nutty when it hits 5,000 rpm at which point the Si decides you as the driver want to play.

And for those of you out there with family duties who require consistent use of the back seat Honda also offers the Si as a four door sedan. Prices for the coupe start at $22,790 with summer tires adding $200 and in-dash navigation adding another $1,500. So what are you waiting for, a written invitation?

– The deliciously addictive howl and power surge from the 2.4 liter engine above 5,000 RPM
– The Si’s six-speed manual transmission is amazingly entertaining and the only gearbox offered
– It looks fantastic in red
– It’s still a Honda so it’s practical, well built, relatively efficient and totally affordable
– The steering, handling and braking control is unflappable

NOTES FROM THE PEANUT GALLERY….

“My first impression of the 2014 Honda Civic Si Coupe was that it instantly made me smile and nod my head in agreement with Honda’s styling choices. Walking around it I really loved the front and rear air dams and the clean lines that somehow went along with them. The interior was more than I expected from the information displays to the quality of materials used. Driving the car was a fun experience as well with its slick 6-speed manual offering endless amounts of fun. It’s a quick and stiff feeling little car that despite having a bit of understeer under heavy acceleration but that’s common in any front wheel drive car. I was truly amazed by how outstanding the Civic Si’s braking was even during panic stops. It repeatedly tracked straight as an arrow and stopped quickly without any fade. I would recommend a buyer think of the installation of a cold air intake and exhaust kit to really wake this compact coupe up. Overall it’s a great car as is but I personally can never have enough horsepower and look forward to the rumored but unconfirmed 2015 turbo Si with a possible 300 horsepower.” -Adam “Skid Marks” Fredericks (Contributor)