Rallying For a Cause: The Polar Run Heads Northbound 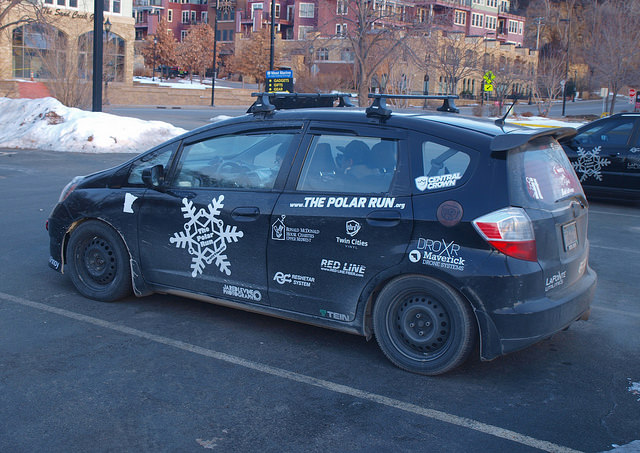 Why yes, we do drive in the winter – and very enthusiastically.

It is not enough to wait until spring for us Minnesotans to get our driving in. Since there is something around with all-wheel drive, snow tires and a bit of a throttle response, we will tackle anything, anywhere…and do it for a cause!

The Polar Run kicked took to the road on a winter rally from Stillwater, Minnesota to the resort community of Lutsen. The route would take this group of 35 teams northward to the North Shore and the mountains just above it.

Inspired by the Central Crown charity rally last year, two veterans of that race – Matt Smith and Hayley Lynn Noll – came together to do a winter version of it – sort of. Instead of focusing on competition, they made it simply a “Rally for a Cause.” The charity for the Polar Run is the Ronald McDonald House, Upper Midwest Chapter. They have three programs currently serving the University of Minnesota Medical Center, the Children’s Hospital of Minneapolis and the Gillette Children’s Hospital in St. Paul. A fourth location is coming soon to St. Paul to serve the Children’s Hospital in that community.

To find out what The Polar Run is truly all about, I interviewed Matt and Hayley prior to the start of the rally to see what these two had in store for the 35-plus teams that ran the rally on the final weekend of January.

WTR?: Coming off the Central Crown run, what prompted the idea of the Polar Run?

Matt:  Central Crown was the first such event I’d ever participated in, and it was orders of magnitude more entertaining than I had ever anticipated.  On the drive back to the Twin Cities from Chicago, I was still riding that excitement.  We had a Zello channel set up for Central Crown participants to communicate, and on that drive back I heard Hayley come over the air saying something like, “We should do this in the winter.”  That was all I needed to hear.  Honestly, The Polar Run is 100% Hayley’s idea.  I just reached out to her after we got back to offer my services in whatever ways I could.

I was also inspired by Central Crown’s focus on philanthropy.  After some research and conversations, Hayley recommended that we partner with Ronald McDonald House for this #rally4acause.  Their work is tremendously important and it’s quite an honor to be able to funnel our proceeds their way.

Hayley: I remember the beginning as a post in the Facebook group for people participating in the Central Crown just 2 days after the rally, and it went something (exactly) like this… CC Rally Participant: “Part of me wishes that this rally was biannual, but the other part of me feels like i need a year to recover from it.”​ Some others chimed in saying it sounded like its a good idea, but “Someone do this. I’m lazy.”​ Then I decided that on my high coming off the rally, sitting back in my college dorm room, that it would be a great idea and chimed in, “Seriously considering it. The Polar Run” That comment took me probably 10 minutes to type because I had to think of a creative name, that little did I know become so large in such a short amount of time. Within the next hour, I created the Facebook page and got the domain ‘www.thepolarrun.org‘, and the rest is pretty much history.​

WTR?: The obvious differences between Central Crown and the Polar Run are the season, the climate, and road conditions/surfaces. Explain the similarities between the two? What other differences are there?

Matt:  As I was helping with the initial planning phases, I began viewing The Polar Run as the Winter Olympics where Central Crown is the Summer Olympics.  The Summer Games are larger, have more participants, have more grandiose opening and closing ceremonies, etc.  The Winter Games are smaller, more intimate, less pomp and circumstance.  The overall vibe of The Polar Run is, I think, a little bit more akin to the vibe of the winter games.  Central Crown featured a massive bash on the roof of a hotel in Chicago; The Polar Run has a couple of days of skiing/boarding and an apres-ski hot tub.

As for the driving event itself, we were definitely inspired by Central Crown.  We are not attempting to make this a rally in the strictest sense (timed stages, adherence to a schedule, etc), more of an exciting point-to-point blast over some of NW Wisconsin’s and NE Minnesota’s back roads.  One key difference from Central Crown is that we are making this a points-based event.  Each stage will feature at least one challenge for a team to complete in order to earn some number of points.  The team with the most points at the end wins.

Hayley: What Matt said… We are the same in the vicinity that we are a road rally that will be using coordinates to get from one point to the next. Most of the rest is our motto that we want to be the ‘ying’ to Central Crown’s ‘yang’. That meaning besides the obvious differences (season, the climate, and road conditions/surfaces)​, we also want The Polar Run to be the opportunity for those who may not have a vehicle up to Central Crown’s standards to have the opportunity to participate in a similar event.

WTR?: The entry list was more than you both expected. The bulk of them are “winter cars” and trucks. Yet, some are not. Was there some sort of expectation of the kinds of participants and vehicles for entry onto the run? Were they met?

Matt and Hayley:  To be honest, we expected 10 cars, maybe 15 tops to enter this event.  First time event, run by two people very new to such things, we genuinely thought we’d pick up a few Central Crown vets and a couple of other teams and that would be that.  I am still in awe that we have 35+ cars in this!  I think we picked an entry price point low enough to be attractive to a lot of people.  I think we also didn’t come into this having any strong allegiances to any particular automotive subset.  We just love things with wheels and engines and the people that love driving them.  It absolutely warms my heart to see not only your standard winter cars (Subarus, Audis, etc), but pickup trucks (one Ford, one Chevy, the classic rivalry), SUVs, rwd muscle cars, econoboxes, old cars, new cars.  This event is designed for anyone with a love for driving in the winter and an appreciation for the fact that winter driving conditions are ever challenging, never static.

WTR?: What do you expect would be the outcome of the Polar Run?

Matt and Hayley:  All teams have a grand old time running around the back roads, arrive safely at the destination in Lutsen, enjoy themselves over the weekend at mountain, and help us raise money, goods, and awareness for Ronald McDonald House.  And if all goes well, this will be year one of an annual Polar Run.

WTR?: What other activities do you have in store for the participants on the Polar Run?

Matt and Hayley:  The challenges our teams will face during each stage of the event are designed to be fun, simple enough to complete so that teams won’t get bogged down trying to finish them off, and designed to keep teams following the same general route.  For example, one checkpoint is in the small town of Bruno, MN.  There’s a small park there with a sign touting the fact that Bruno is the birthplace of the first person to ride a snowmobile to the North Pole.  Teams have to stop by this sign and snap a photo of their vehicle in front of it in order to earn the points for that stage.

Once teams have arrived at the destination in Lutsen, we’ll have some food waiting for them and they can relax, get checked in to their lodging, etc, while Hayley and I tally up all the team’s points.  Then, a couple of hours after the final team arrives, we’ll have an awards ceremony honoring the overall points winner and awarding prizes in various other categories (Least Likely Winter Rally Vehicle, Dirtiest Vehicle on Arrival, etc).

After that the rest of the weekend is all skiing, hot tubs, and whiskey drinks (at least for us).​

WTR?: Why would anyone want to do the Polar Run?

Matt:  Why this ride?  If you love cars of any sort, love driving in the winter, love to be able to give back to the community, love exploring back roads that are featured only on the most detailed of maps, and love the camaraderie of people from all walks of life who happen to enjoy those same things, that’s why.

Hayley: There are a lot of road rallies out there it seems like these days. Just Google “road rally usa” and you will come up with dozens of ​hits for rallies that look cool, and all that I would like to run at least once in my life. However, not a single one of the first 20 to show up are winter based rallies. Granted several take place in the south where they have no ‘winter’, in none of them do cars see snow. That is what is so exciting about The Polar Run. Weather can play a huge factor, and if it so happens to be a blizzard, the day of the rally, we would be more than welcome to it!

Matt:  I am floored by how Hayley has put this together.  Her dedication has been unwavering, her vision grand, and her heart committed.  35 teams?  No problem!  Trouble finding the right source for vinyl?  Gets her own vinyl cutter and stays up until 3am night after night running it.  And (maybe a little on the scary side) it seems that whenever she and I plan something on our own (like some initial routing ideas), when we come together we find that we’ve planned almost identical things.  She’s been a partner without peer, and I’m privileged that she allowed me to be part of this.

From the success this rally had, you can count on another Polar Run in 2016.